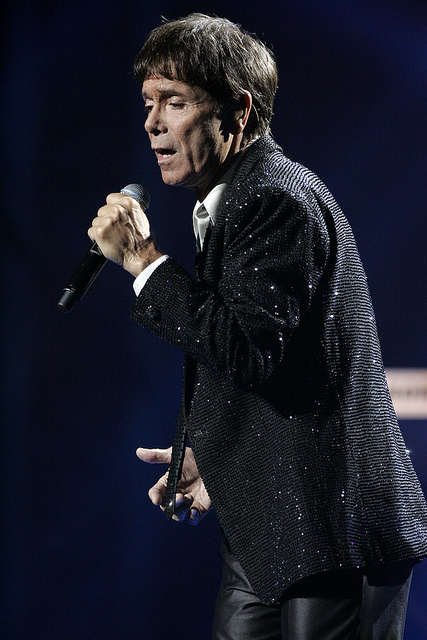 Cliff Richard dated back to the early days of British rock, back to even before the Beatles, which made him very dated indeed. Yet you hardly would have known that if you saw him, as I did in March 1981, getting ready to do a concert in Calgary. There he was, the eternal Peter Pan of English popular music, looking 10 years younger than his 40 years, a testament to clean and righteous living.

He’d been top of the British pops since 1958, the year Richard recorded “Move It,” a guitar-driven three-chorder that John Lennon would later say was the first ever British rock ’n’ roll record. It didn’t make much of an impact in the States, but that was only because the American rock scene was dominated then by Elvis Presley, who had released seven million-selling singles in 1956 alone. Presley continued to churn out million sellers at the rate of five or six a year for the next decade.

Richard freely acknowledged that Presley paved the way for his success in Britain. “If there hadn’t been an Elvis, there couldn’t have been a me,” he told me. “The whole inspiration for me came from that era. Elvis was the figurehead of rock ’n’ roll.” Richard was one of three English singers (the other two were now-forgotten Billy Fury and Adam Faith) who started out as Elvis imitators complete with pompadours and curled upper lips, and eventually created their own quintessentially British brand of rock.

In Richard’s case, it was his medium-tempo ballads, not the hard-driving rockers, that kept him on top of the British charts. “Living Doll,” recorded in 1959 when he was 18, was his first U.K. million seller. Three years later, Richard released three million sellers in quick succession: the orchestra-sweetened “The Young Ones,” the waltz-tempo “Bachelor Boy” and the string-laden “The Next Time.” These firmly established him as Britain’s top pop artist. Then along came the Beatles, and Richard faded into the background. But not into obscurity.

“The Beatles didn’t wipe the rest of us out,” he told me. “What they did was impress the media so much that they wrote about nobody else for a year. Everyone thought the rest of us were finished but, in point of fact, I don’t remember a time when I played to empty houses in England. My records were still getting into the Top 20.”

But only in England. Never considered part of the British invasion of North America, Richard didn’t get a Top 10 hit in the United States until 1976, 18 years after “Move It” made the British charts, and eight years after Richard placed second in the Eurovision Song Contest with the bouncy “Congratulations.”

His breakthrough American hit, released when he was 36, was “Devil Woman,” a disco-oriented single from his appropriately-titled I’m Nearly Famous album. By that time, Richard had become a born-again Christian and given some thought to becoming a full-time preacher. An Associated Press story in 1971 referred to him as “a former rock ’n’ roller who became Britain’s top evangelist after meeting Billy Graham.” But while he did record two gospel albums, Richard said he never lost touch with his pop roots because “I just love rock ’n’ roll. If you can keep your affair with rock going, then the enthusiasm never wanes. What keeps me going is doing new material all the time. Nostalgia is great, but you really have to keep it in its place. Otherwise it can stop all creativity. For me, it’s healthier as an artist to have newer material because then I’m creating tomorrow’s nostalgia for myself.”

In his Calgary concert, Richard’s selection of “tomorrow’s nostalgia” included a lot of disco material that seemed hardly destined for a long shelf life. Only one song, “We Don’t Talk Anymore,” stood out as a highlight in an otherwise forgettable program. Richard also included some gospel songs in the show, offering them without any accompanying proselytizing, which came as a relief to his secular-minded listeners. His contemporary B.J. Thomas (“Raindrops Keep Falling on My Head”) had recently taken to offering testimony during his pop concerts, which alienated many of his fans. But Richard just sang the songs and kept his evangelizing off the stage. “My faith is important to me,” he had told me before the concert. “But I don’t like to push it on my fans during my concerts.”

Richard said he hoped “We Don’t Talk Anymore,” which had reached #7 in the American singles charts, would bring him some extended success in the United States. But if it didn’t, he added jokingly, “I can always spend the rest of my career just in England, singing ‘The Young Ones.’” He said American success was important to him, not from a financial standpoint “because I don’t need their money,” but from the position of getting respect. “It’s the fatherland of rock ’n’ roll and it would be really good if I could bring back there the kind of music that first influenced me.” Settling in the States for a couple of years might be one way of achieving this, he said, “but I’m not prepared to do that. I guess I’ll just have to take whatever I can get.”

He had a few minor hits in the U.S. after he finished his 1981 Calgary engagement, but nothing that made the charts after 1983. In Britain, meanwhile, Richard continued to be as popular as ever. By the 1990s, he had achieved the distinction of being the first and only artist to top the British singles charts through five decades, from the 1950s onward. In 1995, he became the first pop star to be knighted by the Queen. (Dublin-born Bob Geldof had received an honorary knighthood nine years earlier for his fund-raising work.) In 2014, at age 73, Richard was still going strong. He had done so well during his 56 years as a recording artist that his Wikipedia profile printed out at an impressive 35 pages. In June 2014, Richard put on a free show for his fans in New York after a scheduled engagement with English rocker Morrissey was cancelled due to Morrissey’s illness. Richard subsequently announced he would play 11 concerts in the UK in 2015 to mark his 75th birthday.