The Intergovernmental Panel on Climate Change today published the trailer for a the video of its fifth report, to be released at an international climate meeting in Lima next month. Its message: “We either continue on the path that we are on and possibly face catastrophic climate change, or we listen to the voice of science, and act accordingly. That’s really our choice.”

Here are related stories on F&O:

How does the IPCC know climate change is happening? In Expert Witness, by Mark Maslin, November 4, 2014

Climate change caused by humans will result in food shortages, mass extinctions and flooding, warns the world body of climate experts in its most comprehensive report yet, signed in Bonn on November 2, 2014. It says the science is now 95 per cent conclusive, that today’s climate change is unprecedented, and warns that the world must act, together and immediately, on adaptation and mitigation. It says some changes are already inevitable and the risk of not acting is extreme: “Without additional mitigation efforts beyond those in place today, and even with adaptation, warming by the end of the 21st century will lead to high to very high risk of severe, widespread and irreversible impacts, globally.”

Also read: F&O ‘s Natural Security columnist Chris Wood; Tzeporah Berman in The Pointy End, on finding hope in environmental activism and on The Ugly Oil Sands Debate;  “expert witnesses” Brad Allenby On Geoengineering: a case for sophisticated thinking and Bradley J. Cardinale on Biodiversity in the Anthropocene; and An Argument for Carbon Divestment, by Desmond Tutu.

A selection of the wide range of reactions to the fifth IPCC report elsewhere on the Internet:

In Hong Kong spiritual and religious leaders held an interfaith forum on November 3, reported the South China Morning Post. They are part of the international Our Voices movement launched this spring. The organization urges people to sign a petition asking world leaders to act on climate change, which it calls a moral issue as “a humanitarian and development emergency, and it’s already affecting many vulnerable communities … According to rigoruosly verified IPCC reports, it’s going to get unimaginably worse.”

In Copenhagen, debate began over the future of the Intergovernmental Panel on Climate Change. “After a six-year scientific marathon that involved about 4,000 authors, contributors and reviewers and 30,000 climate studies, the U.N.’s expert panel on climate change has published its latest assessment on global warming. Now many wonder what’s next,” reported the Associated Press (via Washington Post) in Future of UN climate body debated.

Stewart Wallis, executive director of the New Economics Foundation, called for a new approach in attempts to overhaul the economic system.  “We and many other civil society organisations have been much better at saying what is wrong with the current system than providing a positive new story about how we can flourish while living within planetary ecological limits,” he wrote in An economic system that supports people and planet is still possible, in the British Guardian.

An editorial in The National newspaper in the United Arab Emirates stopped barely short of climate denial in reacting to the IPCC report. In an editorial headlined Climate needs a careful response, it advocated full speed ahead but, with a nod to climate change, by alternative energy means: “The answer to the climate-change dilemma lies in a measured approach. We need to make practical changes such as those underway in the UAE, which is introducing nuclear and solar power and other sustainable technologies, but we must also do much more research. The need to reduce our reliance on fossil fuels is acknowledged, but so too is the reality that only they can service immediate global energy needs. And one interpretation of eliminating greenhouse emissions altogether would mean eliminating all animal life, including humans.”

In Canada a group of independent policy analysts, economists, business people and former politicians today launched an organization called Canada’s Ecofiscal Commission. It says it aims to “to align Canada’s economic and environmental aspirations. We believe this is both possible and critical for our country’s continuing prosperity.” The commission’s first report, identifying a set of policy targets that are extremely contentious in a country that is one of the world’s biggest oil and gas producers, and which famously pulled out of the Kyoto Accord:

In the United States, where today’s mid-term elections will determine control of the Senate, Republican Senator Jim Inhofe called the IPCC ” a front for the environmental left” in a statement responding to its fifth report. Inhofe, senior member of the Environment and Public Works Committee, has said he will lead the committee if the Republicans control the American Senate after today. An excerpt of his statement:

“The idea that our advanced industrialized economy would ever have zero carbon emissions is beyond extreme and further proof that the IPCC is nothing more than a front for the environmental left. It comes as no surprise that the IPCC is again advocating for the implementation of extreme climate change regulations that will cripple the global economy and send energy prices skyrocketing. The United States is in the midst of an energy renaissance that has the potential to bring about American energy independence, which would strengthen our national security and energy reliability for generations into the future. At a time of economic instability and increased threats to American interests, the IPCC’s report is little more than high hopes from the environmental left.” 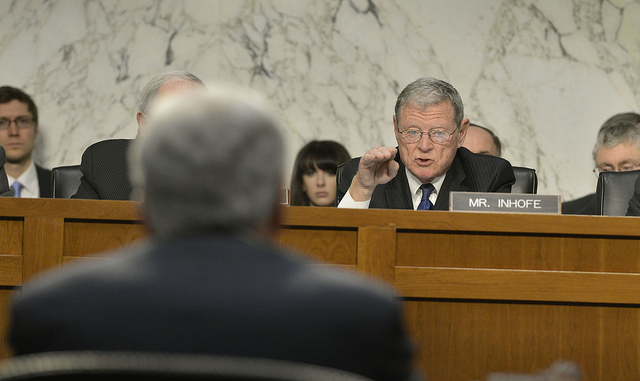 Climate denial is a common and popular position in the United States where, for example, Fox News last week gave one of America’s most prominent deniers a “warm welcome,” reported Media Matters:

“The October 28 edition of Fox News’ The Kelly File featured John Coleman, co-founder of The Weather Channel, allowing him to promote his belief that “man-made global climate change is a myth.” During the segment, Coleman falsely claimed that the scientific consensus that human activities drive climate change is based on “bad, bad science” and repeated the falsehoods that an increase in Arctic ice disproves global warming and that polar bears are doing just fine. He also blamed Al Gore for making it difficult for a climate skeptic to “get on TV….

This entry was posted in Current Affairs, Gyroscope and tagged Cimate change, IPCC.