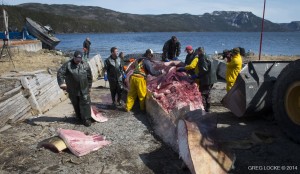 A team from the Royal Ontario Museum begins dissection on a 24 metre, 100 tonne, blue whale, in Woody Point, Newfoundland, Canada on Thursday May 8, 2014.. The whale was one of nine that died in the Gulf of St. Lawrence after being trapped and crushed by heavy sea ice. The scientists will take biological samples and collect the skeletons of two whales in the area and transport them to the museum in Toronto for further study. Blue whales are an endangered species in the north Atlantic with only an estimate 250 in existence. The loss of nine at one time is a significant impact on the species. Photo by Greg Locke – © COPYRIGHT 2014 – www.greglocke.com