Below is F&O’s Fresh Sheet. We’ll have more stories later this week — see our Contents page for our newest original and curated works.

Current affairs are a raging flood, from breaking news about the Canada-Europe free trade dea. (Reuters) to a pipeline protest in North Dakota that activist Bill McKibben calls the “New Keystone” and writer Paul VanDevelder calls a “reckoning” that began with America’s Founding Fathers. The Middle East, especially Syria, remains unrelentingly tragic (Google). And (sigh) there’s another email kerfuffle (NPR) as the gong-show of the Nov. 8 American election dominates our attention. 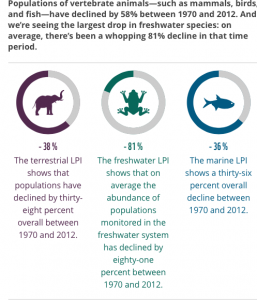 The sobering backdrop to all of this (relative) ephemera is yet more evidence that the systems we need to survive as a species, let alone as a “civilized” species, are vanishing. The Living Planet Report 2016 report, released this week by the World Wildlife Fund, catalogues the disappearance since 1970 of 38% of other terrestrial creatures, 81% of freshwater creatures, and 36% of marine creatures. Warned the WWF with remarkable restraint, “This loss of wildlife is startling, and people are at risk, too. Without action, the Earth will become much less hospitable for all of us. We must consider our impact on nature as we make development, economic, business, and lifestyle choices. A shared understanding of the link between humanity and nature is essential to making profound changes that will allow all life to thrive for generations to come.” Read the WWF report.

Meanwhile, today marks the six-decade anniversary of the 1956 Suez Crisis, the 1956 invasion of Egypt by Israel, along with Britain and France, over control of the vital Suez Canal. The aggressors were forced to back down by the United States, the Soviet Union, and the United Nations. Proving the law of unintended consequences, the crisis –AKA the Tripartite Aggression or the Kadesh Operation — changed the modern world, marking Britain’s capitulation to American cultural and geopolitical hegemony and leading to the creation of UN peacekeepers . Read more at Wikipedia.

Thanks for visiting, and please note that we’ll survive as an independent, employee-owned, no-advertising journalism boutique for only as long as you, our readers, support us.

Government and FARC peace negotiators have been mulling over dozens of proposals to rescue the peace accord, meant to end a long-running war, and rejected by voters. One surprise is that FARC’s child soldiers are reportedly reluctant to leave the insurgents they view as family.

Imagine if, during America’s Jim Crow era, a newspaper offered advertisers the option of placing ads only in copies that went to white readers. That’s basically what Facebook is doing nowadays. The ubiquitous social network not only allows advertisers to target users by their interests or background, it also gives advertisers the ability to exclude specific groups it calls “Ethnic Affinities.” Ads that exclude people based on race, gender and other sensitive factors are prohibited by federal law in housing and employment.

Two seemingly unconnected incidents this week suggest Washington and North Korea are limbering up for another bout in their two decades-long wrestling match over the Pyongyang regime’s nuclear weapons program.

The selection of António Guterres as the new United Nations Secretary General is encouraging news for those concerned about the global challenges brought on by climate change.

To our supporters, thank you. To newcomers, please know that reader-supported Facts and Opinions is employee-owned and ad-free. We continue only because readers like you pay at least 27 cents per story.  Payment options are here.