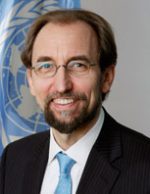 Hate is becoming mainstreamed. Walls – which tormented previous generations, and have never yielded any sustainable solution to any problem – are returning. Barriers of suspicion are rising, snaking through and between our societies – and they are killers. Clampdowns on public freedoms, and crackdowns on civil society activists and human rights defenders, are hacking away at the forces which uphold the healthy functioning of societies. Judicial institutions which act as checks on executive power are being dismantled. Towering inequalities are hollowing out the sense that there are common goods. These trends bleed nations of their innate resilience.

Canada’s debate over changing its anthem to make it gender neutral is immature. Seldom has so much ink and indignation been spilled over such a simple matter. Making Canada’s national anthem more open to all people is of course a good idea. It is the very essence of Canada itself.

Two events make it depressingly clear that after political and social advances Africa is slipping back into its bad old ways. On Thursday, the Mo Ibrahim Foundation announced that yet again there is no one worthy of receiving its latest prestigious and lucrative prize for excellence in African leadership. And in Angola, President Eduardo dos Santos put his daughter, Isabel, in charge of the state-owned oil company.

On May 30, in an African court, history was made. In an unprecedented move, a former president was convicted of human rights abuses by a foreign court. In another historic ruling, the accused was also sentenced on counts of sexual abuse and the rape of a prisoner. The conviction of Chad’s former dictator, Hissène Habré, comes at a crucial time for international justice in Africa.

I would like to love Ulysses. I don’t. Perhaps James Joyce was just playing a big joke on us?

A man armed with an assault rifle killed and injured scores of people at a packed gay nightclub in Orlando, Florida on June 12 in the worst mass shooting in U.S. history, which President Barack Obama described as an act of terror and hate.

More than 155 financial institutions have invested billions of dollars in companies making cluster bombs, weapons which are banned under international law because of their impact on civilians, a pressure group said. The firms include those in Canada, France, Germany, Japan, Spain, Switzerland and Britain, countries which have signed a convention banning the weapons.

Gary, Indiana is joining Detroit and other fading U.S. industrial centers in an effort to turn abandoned neighborhoods and factory sites into gardens, parks, and forests. In addition to the environmental benefits, these greening initiatives may help catalyze an economic recovery.

Fighting for transgender rights in the U.S. By Reuters  Report/Photo-essay

Sexuality as a spectrum, and the wisdom of Indonesian Bugis. By Sharyn Graham Davies  Expert Witness

What if gender were viewed the same way sex researcher Alfred Kinsey famously depicted sexuality – as something along a sliding scale? An ethnic group in South Sulawesi, Indonesia – the Bugis – views gender this way. This spectrum of sex is a good way of thinking about the complexity and diversity of humans.

A Father’s War, A Son’s Toxic Inheritance. By Stephen M. Katz for ProPublica and The Virginian-Pilot, as told to Mike Hixenbaugh and Charles Ornstein  Magazine

The package from my father delivered a warning: A handwritten note attached to a stack of Veterans Affairs medical records. During the war, before I was born, Al had sprayed Agent Orange along riverbanks in Vietnam, often soaking his uniform in the herbicide. The exposure, he wrote, had caused him serious health problems, including a neurological disorder, and he believed it also might have harmed me. My mind raced as I thought of my own troubled medical history.