Researchers have discovered that two infections common in domestic bees – whose colonies have been collapsing in North America and Europe – can spread to wild bees. Both managed and wild bees are essential for pollinating crucial agricultural crops from almonds to zucchini. 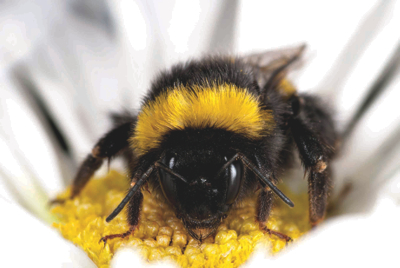 Bumblebee on a flower frequented by a multitude of insects – and a hotspot for disease transmission. Photo Matthias A. Fürst/Nature

The finding may partly help explain the global decline of wild pollinators such as bumblebees, suggests a study1 published in the February 20 edition of the science journal Nature.

Previously, scientists thought the infections were specific to species.

Global trade may be worsening infection rates, as domestic bees are shipped from place to place to pollinate commercial crops, and could thus infect wild bees wherever they go.

“Emerging infectious diseases pose a risk to human welfare, both directly and indirectly, by affecting managed livestock and wildlife,” they noted.

In a laboratory, the researchers were able to infect bumblebees with two common pathogens that harm or kill honeybees: deformed wing virus (DWV) and Nosema ceranae, a fungal parasite.

Then, in field studies at 26 sites, they found that wild pollinators were commonly infected — and that the infections were genetically close to strains found in managed bees. While the research was conducted only in Britain, they noted the conditions for infection in managed bees —  dense colonies of animals with high rates of infection by parasites that weaken them — “are present at a global scale.”

Specific details about just how the infections are transmitted remain unanswered, the researchers stressed. But they added, “the high prevalence of the virus in honeybees is consistent with the theory that they are the major source of infection for the pollinator community.”

The study did not suggest solutions to the problem of disease transmission from managed to wild pollinators. It noted that measures to reduce pathogens in managed bee colonies are complicated, and the authors wrote that more research is needed to find out if better hygiene and tighter shipping regulations would help.

Pollinators worldwide, both managed and wild, face challenges including a multitude of infections, changing food sources, and chemicals including some pesticides. Their decline poses a risk to human food security.

References and further reading:
1. Nature journal: Disease associations between honeybees and bumblebees as a threat to wild pollinators http://www.nature.com/nature/journal/v506/n7488/full/nature12977.html
F&O: Honey? Honey? Where are you? A feature by Greg Locke on colony collapse disorder
Wikipedia page on Colony Collapse Disorder
New York Times report, May, 2013, on research: Study Finds No Single Cause of Honeybee Deaths http://www.nytimes.com/2013/05/03/science/earth/government-study-cites-mix-of-factors-in-death-of-honeybees.html?_r=0