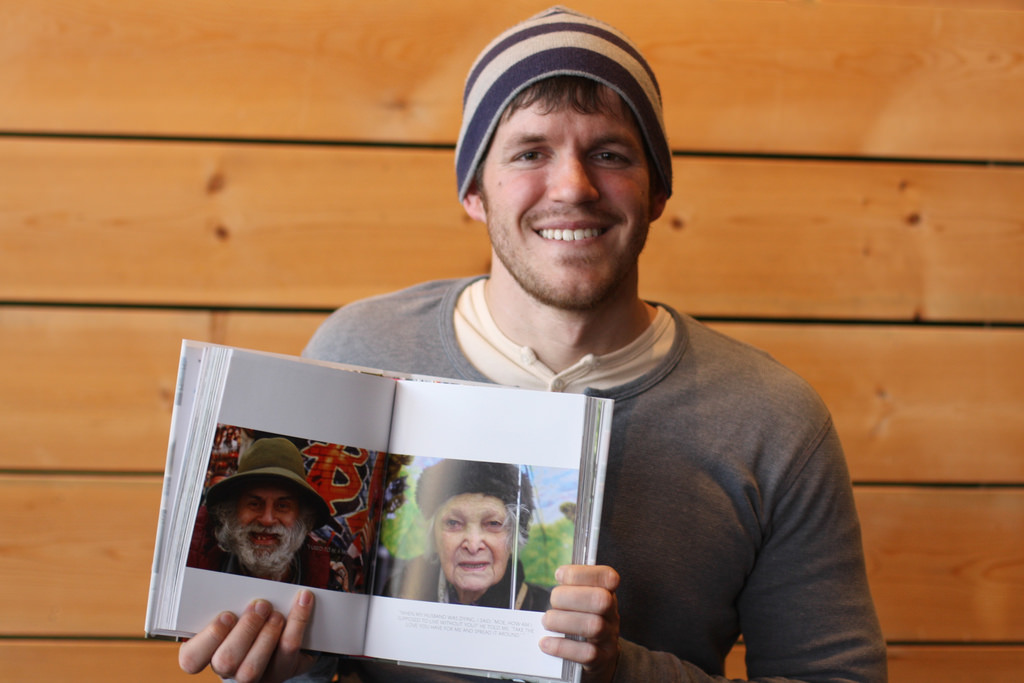 Niyantha Shekar: “Of all the photographs in your book, which one do you feel like looking back on right now?” Brandon Stanton: “The woman under the umbrella.” The caption under the photo Brandon reads: “When my husband was dying, I said: ‘Moe, how am I supposed to live without you?’ He told me: ‘Take the love you have for me and spread it around.’” Photo by Niyantha Shekar/Flickr/CC

More than 59m people around the world are currently displaced as a result of conflict and crisis. More than 500,000 of these refugees – the majority of them escaping the deadly civil war in Syria – have fled to Europe over the past several months. These are staggering numbers, and as with any large-scale human crisis, one key challenge is to comprehend the human suffering behind them.

Through HONY, Stanton has catalogued the lives of ordinary New Yorkers, using photographs and interviews. He has gained popularity across an array of social media platforms, including Facebook (15.5m likes), Instagram (3.9m followers) and Twitter (356,000 followers), and his book documenting the project became a New York Times bestseller. On September 29, he announced that he would be sharing stories from refugees who are making their way across Europe. He said:

These migrants are part of one of the largest population movements in modern history. But their stories are composed of unique and singular tragedies. In the midst of the current ‘migrant crisis’, there are millions of different reasons for leaving home. And there are millions of different hardships that refugees face as they search for a new home.

Since then, the site has shared the stories of government clerks from Baghdad, Nepalese engineers, Afghani interpreters and Syrian waiters who left everything behind and embarked on treacherous and sometimes deadly journeys to reach safety. But the question remains: how much can readers learn about a complex, global, political issue like mass migration from a handful of stories about individual people?

The project quite deliberately tugs on the heartstrings of its audiences in its attempt to generate empathy for the refugees. One typical post, featuring a photograph of a crying woman, tells the story of how she lost her husband at sea after their boat capsized: “The waves were high. I could hear him calling me but he got further and further away. Eventually a boat found me.”

Another post, featuring a photograph of a father and his daughter, recounts the father’s lament:

I wish I could have done more for her. Her life has been nothing but struggle. She hasn’t known many happy moments. She never had a chance to taste childhood. When we were getting on the plastic boat, I heard her say something that broke my heart. She saw her mother being crushed by the crowd, and she screamed: ‘Please don’t kill my mother! Kill me instead!’

Because of its distinctive style and approach, the site has not been immune to ridicule and criticism. Countless parody accounts have sprung up. These include Millennials of New York, which attempts to offer stories that are “a little less inspirational”; Felines of New York, Lizard People of New York, Pigeons of Boston and Goats of Bangladesh – to mention just a few.

But HONY also has more serious critics to reckon with. Some suggest that these stories are mere caricatures, which oversimplify and sentimentalise what are often very complex stories, and seek to emotionally manipulate audiences through clickbaiting. Debates rage over whether it can be seen as a form of journalism and, if not, how we should understand the project.

Critics may be right that Humans of New York is not journalism as we know it. After all, it shies away from claims to objectivity and is explicit about its moral aim to humanise the headlines; to dig beneath the numbers and reveal the human stories that might make audiences empathise with the suffering of distant others. The project takes place in partnership with the UN, and therefore more appropriately belongs safely in the category of humanitarian advocacy through storytelling.

Yet HONY borrows from long-standing journalistic and documentary practices. For example, the British social documentary movement, which started in the 1930s, was premised on the importance of telling the stories of “ordinary” people to counter the dominance of elite and upper-class in the media.

My own research on the role of emotion in journalistic story-telling demonstrates that the most highly regarded journalism – Pulitzer Prize winning reports – draw extensively on emotive and personal story-telling as a means of illustrating what are often very complex and abstract issues, ranging from the fate of the New Jersey fishing industry to breakthroughs in the use of DNA technology for medical treatments.

This is precisely because it is only through such personal stories that we can step into the shoes of others – whose lives and experiences may be very different from our own. Humans of New York may be sentimental, simplistic and saccharine to some, but it also represents a major achievement. Using time-honoured journalistic techniques, it has shown its audience that the personal and private stories of refugees represent a shared political reality, which we ignore at our peril.

Professor Karin Wahl-Jorgensen is Director of Research Development and Environment, School of Journalism, Cardiff University This article was originally published on The Conversation. Read the original article.

Facts and Opinions relies on the honour system: enjoy one story at no charge, and if you value our independent, no-spam, no-ads journalism collaboration, chip in at least two bits. Click here for details.