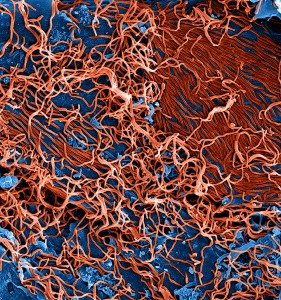 LONDON/GENEVA, (Reuters) – The world is on the verge of being able to protect humans against Ebola, the World Health Organization said July 31, as a trial in Guinea found a vaccine to have been 100 percent effective.

Initial results from the trial, which tested Merck and NewLink Genetics’ VSV-ZEBOV vaccine on some 4,000 people who had been in close contact with a confirmed Ebola case, showed complete protection after 10 days.

The results were described as “remarkable” and “game changing” by global health specialists.

“We believe that the world is on the verge of an efficacious Ebola vaccine,” WHO vaccine expert Marie Paule Kieny told reporters in a briefing from Geneva.

The vaccine could now be used to help end the worst recorded outbreak of Ebola, which has killed more than 11,200 people in West Africa since it began in December 2013.

WHO Director-General Margaret Chan said the results, published online in the medical journal The Lancet, would “change the management of the current Ebola outbreak and future outbreaks”.

The Gavi Alliance, which buys vaccines in bulk for poor countries who struggle to afford them, immediately said it would back an Ebola shot once it is approved.

“These communities need an effective vaccine sooner rather than later,” Gavi’s chief executive Seth Berkley said. “We need to be ready to act wherever the virus is a threat.”

This and other vaccine trials were fast-tracked with huge international effort as researchers raced to test potential therapies and vaccines while the virus was still circulating.

“It was a race against time and the trial had to be implemented under the most challenging circumstances,” said John-Arne Røttingen of Norway’s Institute of Public Health, chair of the trial’s steering group.

The Guinea trial began on March 23 to evaluate the effectiveness and safety of a single dose of VSV-ZEBOV using a so-called “ring vaccination” strategy, where close contacts of a person diagnosed with Ebola are immunized – either immediately, or at a later date.

As data began to emerge showing the very high protection rates in those vaccinated immediately, however, researchers decided on July 26 that they would no longer use the “delayed” strategy, since it was becoming clear that making people wait involved unethical and unnecessary risk.

The trial is now being continued, with all participants receiving the vaccine immediately, and will be extended to include 13- to 17-year-olds and possibly also 6- to 12-year-old children, the WHO said.

Jeremy Farrar, a leading infectious disease specialist and director of the Wellcome Trust, said the trial “dared to use a highly innovative and pragmatic design, which allowed the team in Guinea to assess this vaccine in the middle of an epidemic”.

“Our hope is that this vaccine will now help bring this epidemic to an end and be available for the inevitable future Ebola epidemics,” his statement said.

The medical charity Doctors without Borders (MSF), which has led the fight against Ebola in West Africa, called for VSV-ZEBOV to be rolled out to the other centres of the outbreak, Liberia and Sierra Leone, where it says it could break chains of transmission and protect front-line health workers.

VSV-ZEBOV was originally developed by Canada’s public health agency before being licensed to NewLink Genetics, which then signed a deal handing Merck the responsibility to research, develop, manufacture and distribute it.

The success of the Guinea trial is a big relief for researchers, many of whom feared a sharp decline in cases this year would scupper their hopes of proving a vaccine could work.

Another major trial in Liberia, which had aimed to recruit some 28,000 subjects, had to stop enrolling after only reaching its mid-stage target of 1,500 participants. Plans for testing in Sierra Leone were also scaled back. That left the study in Guinea, where Ebola is still infecting new victims, as the only real hope for demonstrating the efficacy of a vaccine.

(Additional reporting by Tom Miles in Geneva and Ben Hirschler in London; Editing by Kevin Liffey) 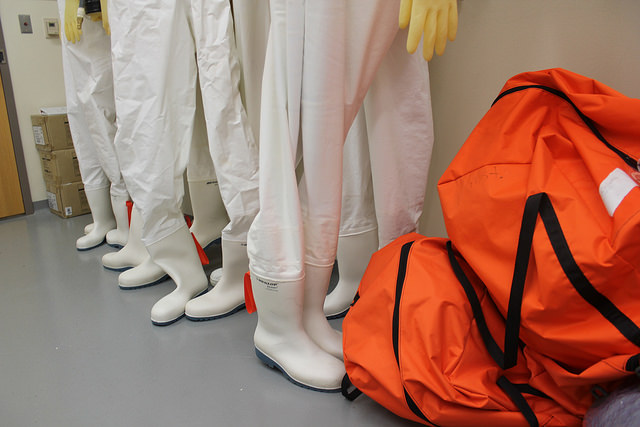 Research continues with other Ebola vaccines

LONDON (Reuters) – Scientists and drug companies will continue to research the potential of alternative Ebola vaccines, despite a shot from Merck  and NewLink Genetics proving 100 percent effective in a trial in Guinea.

Experts said on Friday different kinds of vaccines were needed that might be better suited for different population groups.

Because Merck’s VSV-ZEBOV is a live, or replicating, vaccine, there were initial worries about its safety. In the event, it proved about as safe as a flu vaccine, said University of Reading virologist Ben Neuman, but it was still not given to children or pregnant women.

Replicating vaccines have the advantage of requiring only one dose, making them suitable for emergency use. But non-replicating vaccines, which may need two injections, could be longer-lasting and better suited to protecting people outside an epidemic.

“There is a place for all of these different modes and it’s important that development work on other vaccines continues,” Rebecca Grais, director of research at Medecins Sans Frontieres (MSF) Epicentre, told Reuters.

“It’s also important to have multiple manufacturers in order to ensure competition.”

MSF was one of the organisations behind the successful clinical trial with Merck’s vaccine, which the World Health Organization said had brought the world to the verge of being able to protect humans against Ebola.

GlaxoSmithKline applauded its rival’s success but said it would persevere with development of its alternative non-live vaccine.

“We believe that it is important that the international community continues to support the development of more than one vaccine for the control of Ebola including those that might be more suitable for vaccination of pregnant women, infant children and the immunocompromised,” it said in a statement.

GSK hopes also hopes to test its vaccine in Guinea, although WHO vaccine expert Marie Paule Kieny said this might not be possible, given the dwindling number of Ebola cases.

Johnson & Johnson, which is developing a two-injection vaccine in partnership with Bavarian Nordic, said it remained committed to the programme and hoped to start a trial in Sierra Leone in the coming weeks.

A number of other groups are at an earlier stage of research, including a team from the University of Texas working on an inhaled vaccine.

Adrian Hill, director of the Jenner Institute at the University of Oxford, said the success of Merck’s vaccine suggested other products in mid-stage trials should also prove effective.

Although these alternatives may not be tested during the current epidemic, they could still be licensed and readied for use in future outbreaks based on human immune response results and data from non-human primate experiments.

GENEVA (Reuters) – The World Health Organization is creating a “blueprint” to improve the medical response to major outbreaks of diseases, after it was accused of reacting too slowly to West Africa’s Ebola epidemic, it said on July 31.

“The goal is to reduce the time from recognition of an outbreak to the availability of new medical tools to four months or less,” WHO Director-General Margaret Chan told a news conference in Geneva.

“Doing so, I believe, will leave the world better prepared for the next inevitable medical emergency. No one wants to see clinicians, doctors, left empty handed again.”

The plan is likely to cover influenza strains such as H5N1 and could help prepare for a worsening spread of Middle East Respiratory Syndrome (MERS), among other diseases, WHO officials said.

The proposal is part of a swathe of reforms designed to avoid a repetition of the U.N. health agency’s slow response to the Ebola epidemic, which has killed 11,294 people and has yet to be fully snuffed out in Sierra Leone, Liberia and Guinea.

The WHO is hoping to learn from the development of an Ebola vaccine, which has proceeded at lightning speed compared to normal drug development but only really took off once the Ebola outbreak was already at crisis point.

One potential Ebola vaccine has been shown to be 100 percent effective, trial data showed on Friday.

When the next epidemic comes, the WHO wants the tools to tackle it much more quickly. It plans to analyse diagnostics, vaccines, drugs and other medical equipment, and wants to take research far enough so that the products could reach the final phase of efficacy testing within four months of an outbreak.

“Based on our experience of Ebola and our earlier experience of pandemic influenza, in some diseases it’s very difficult to develop innovations, especially from scratch, in four months,” Chan said.

WHO Assistant-Director-General Marie-Paule Kieny said: ”What we have started to work on … is to see what should be done for other diseases of epidemic potential, prior to any epidemic starting.”

The plan will set up “step-by-step procedures, protocols, collaborative agreements, codes of conduct, and ideal product profiles that can be put in place in advance,” Chan said.

The blueprint is expected to be presented to the WHO’s annual conference of health ministers, the World Health Assembly, in 2016, Kieny said.

NAIROBI (Reuters) – Kenyan officials said on July 31 they were considering conservationists’ appeals to give two baby chimpanzees, rescued from possible traffickers in ebola-hit Liberia, sanctuary in a Kenyan reserve but public health fears were holding up transfer.

Conservationists believe the animals had been victims of trafficking that sent baby chimps from West and Central Africa to Chinese zoos and private estates in the Middle East, where they can fetch as much as $25,000.

But since Ebola was first reported in the West African countries of Guinea, Liberia and Sierra Leone, potential buyers have mostly been scared off, as chimps – man’s closest relative in the animal kingdom – can carry the deadly virus.

Ebola has killed more than 11,200 people in West Africa since it broke out in December 2013. Liberia was declared Ebola-free by the World Health Organisation in May, but there have been some new cases since then.

Two-year-old female Sweet Pea, and Guey, another female, were handed over to conservationists in April, and have been cared for by volunteers in the Liberian capital Monrovia.

But conservationists say they want to find a permanent settlement for the animals and Kenya’s renowned Ol Pejeta Conservancy is the only sanctuary with space.

“There is absolutely no other place on the continent that can take them,” Daniel Stiles, a project manager at Kenya’s Ol Pajeta Conservancy, told Reuters. “There’s no place to put them.”

Kenya’s tourism sector took a hit last year from global fears about Ebola, even though it sits further from the Ebola-affected areas than many of the European countries that supply the tourists.

“We would like some information on their health. It is an Ebola country,” Richard Leakey, the chairman of the board of the Kenyan Wildlife Service and a renowned conservationist, told Reuters on Friday. “We’ve got to be very careful about that.”

“It is not no, it is not yes, it’s please come back as soon as you can, because we realize it’s urgent,” Leakey said.

The request has aroused frustration among conservationists, who say Kenyan officials are stonewalling due to the global panic over Ebola.

“If the chimps had Ebola, so would I, because we’ve been interacting with them for months,” said Phoebe McKinney, an American non-governmental worker in Monrovia who has been helping to care for the chimps as a volunteer.