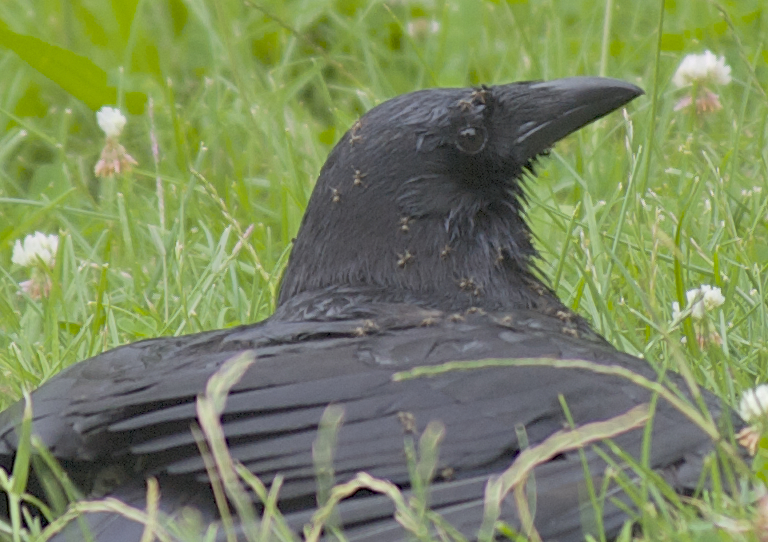 Ants swarm over a crow splayed on an anthill. Photo by Deborah Jones © 2014

In summer it’s common to find a bird flattened on the ground, wings splayed. It may seem injured, but will roust if approached — and when the interruption is over, return with the determination of a junkie seeking a fix, to sprawl on the same spot.

Look closely — a telephoto lens helps — and you’ll likely see it swarming with ants. And instead of being distressed by this frenzied invasion, the bird appears to luxuriate in the attention.

So-called “anting” is common to at least 200 species of birds, say researchers.

Quite why remains the puzzle.

“The theory is that the ants act as deterrent for external parasites,” bird biologist Dick Cannings said in an interview. Ants spray formic acid as a defence mechanism when anxious, angry or concerned, said Cannings.

Have birds learned to cleanse in ant acid the way humans use soaps and lotions?

The formic acid may help “feather maintenance by supplementing preen oil, helping to remove stale lipids and combating ectoparasites,” wrote Y. C. Wee, in a 2008 journal published by the University of Singapore. “Formic acid from ants helps get rid of bacteria, fungi, feather mites and louse flies that are found in the feathers.”

The acid theory was called into question by a 2004 research paper in The Auk, the journal of  The American Ornithologists’ Union, that documented the impact on bacteria and fungi, of formic acid sprayed  by several species of ants. “Although pure formic acid strongly inhibited all bacteria and fungal hyphae tested, concentrations of formic acid found in the bodies of formicine ants did not,” wrote Hannah Revis and Deborah Waller.

Another theory is that anting may soothe skin irritation experienced during moulting, suggested Wee.

Whatever the birds are doing, it seems that ants are not the only grooming aides they use.

Caterpillars, millipedes, beetles, bugs and wasps have all been observed in use by preening birds, wrote Wee. So have fragrant plants like marigolds that contain pyrethrum, and  peppers — and human garbage, including cigarette butts, orange, lime and apple peels, and mothballs.

“Birds do two things that are bit odd at this time of year,” said Cannings, who works in British Columbia with the research organization Bird Studies Canada. “One is anting, and the other is sunning.” Sunlight, said to be nature’s sanitizer, also may deter parasites, he speculated. “They find a sunny spot up against a stump, and they’ll spread their wings and lie back as if they’re getting a sun tan. Usually they look relaxed.”

Could it be possible that, in the way humans also enjoy sunning, being swarmed by ants, or smearing oneself in millipede or wasp secretions or cigarette butts, just feels good?

Independent, non-partisan and employee-owned, F&O provides journalism for citizens, funded entirely by readers. We do not carry advertising or solicit donations from foundations or causes. Support our professional journalism:  For $2.95 (the price of a cheap brew) you can subscribe to F&O for a month. If that breaks your budget, a one-day pass is $1. Our Frontlines blog, where we post small stories and announce new work, is free; use the subscribe form on the right of the page to sign up for email notices.