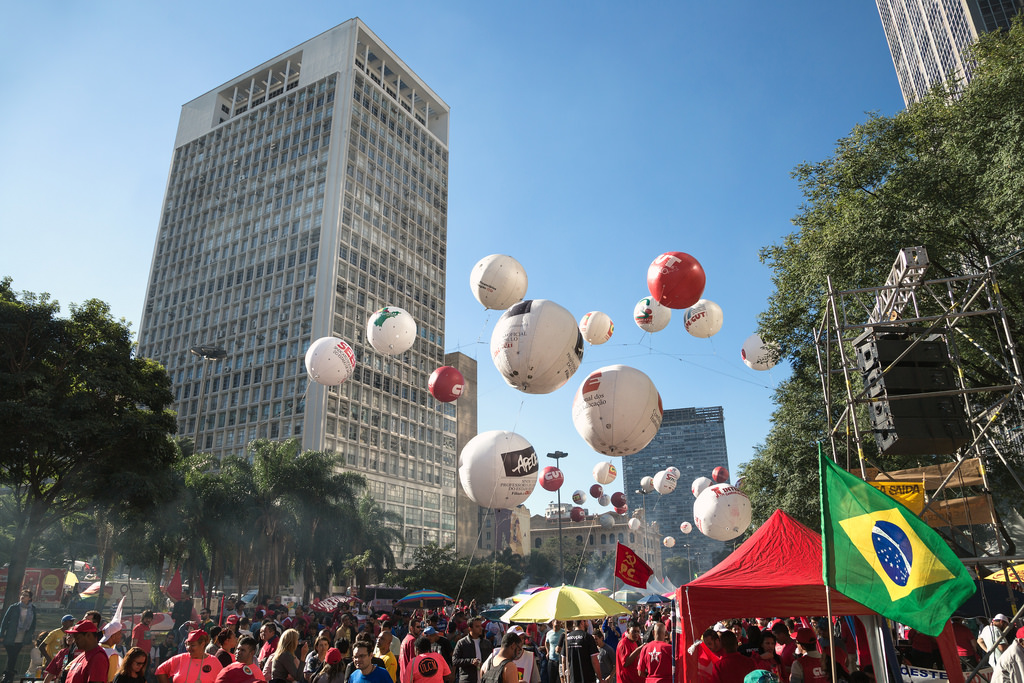 Recent reports indicate that far-right groups from the Ukraine have come to Brazil to recruit neo-Nazis to fight against pro-Russian rebels. Western readers reacted with shock and fascination – but however strange the story might seem, conservatism and political extremism have been on the rise in Brazil for some time.

Many of the country’s hardline right-wingers come out of religious movements, such as neo-Pentecostalism, evangelical Christianity and US-style churches. There are over 600 Christian TV and radio channels, including the second-largest TV channel in the country, Rede Record, which is owned by billionaire bishop Edir Maçedo of the pentecostal Universal Church of the Kingdom of God.

But the right’s most visible political advocates are gathered in Congress, where they form the Bullets, Bible and Beef (BBB) caucus. An increasingly dominant political bloc, the BBB began to form in 2012 during legislative discussions about Brazil’s forest code. Right-wing pro-deforestation rural lobbyists forged an alliance with the evangelicals, and later with armaments and ammunitions lobbyists.

That alliance successfully put forward a number of pro-deforestation proposals, and in 2015, a special commission approved the BBB’s proposal to amend the constitution to give the national congress sole authority over the demarcation of indigenous lands. Many NGOs and advocates consider the proposal disastrous for Brazilian indigenous tribes that rely on land for survival, and a severe environmental danger. And as the BBB has grown more powerful, its far-right conservative agenda has expanded beyond deforestation and agribusiness to include hardline stances against abortion, women’s rights, homosexuality and gun control.

Coming 30 years after Brazil embraced liberal democracy, the sight of ultra-conservative politics returning to the mainstream is rather shocking. And it might never have been possible had the country’s progressive governments done a better job addressing their people’s concerns.

As did their counterparts in many other countries, Brazil’s social democratic and centre-left parties long ago signed up to “soft” versions of the so-called neoliberal agenda, embracing globalisation and free trade. In doing so, they gave up their identity as organs of popular protest – and thereby left an opening for far-right parties and movements to exploit anything resembling a national crisis.

This is what happened to the Workers’ Party (PT), which governed Brazil for a full 14 years. The PT advanced progressive policies, most famously the social security cash transfer programme Bolsa Familia, but also a higher minimum wage and wider access to credit and university education. This policy programme wasn’t popular with the mainstream media, the middle classes and business leaders, but it won the PT loyal support among poor voters. Under its tenure, Brazil saw mild reductions in inequality for the first time in its history.

But these policies weren’t enough. They could not close a gap between high taxes and the low quality of basic public goods, the PT having failed to rework a historically regressive tax system that disproportionately punishes Brazil’s poorest. Services simply did not improve quickly enough to keep up with the country’s growth, pushing many Brazilians’ patience to breaking point. In 2013, massive urban protests erupted against a rise in bus fares and poor service provision.

This all left the PT highly vulnerable.

The PT never held more than 20% of seats in Congress; to govern a country with over 25 political parties, it had made coalitions with the right and adopted some of its economic policies. This proved to be a big mistake, especially when it introduced public spending cuts that ate into its support base. Right after the party’s Dilma Rousseff was re-elected president in 2014, the opposition started calling for her impeachment, citing corruption allegations that many observers considered dubious.

As the economic downturn intensified during 2015 and unemployment rose, media publicity about corruption scandals brought Rousseff’s already low levels of popularity to rock bottom. Michel Temer, Rousseff’s vice-president and coalition partner, was quick to take the opportunity to remove and usurp her.

This was the BBB’s best chance yet to flex its muscles. Among the 367 members who voted to impeach Rousseff, 313 are associated with the BBB. At the time of writing, 373 out of 513 (73%) elected federal deputies in Brazil’s congress are part of at least one of the three congressional fronts that form the BBB.

The right has plenty more fodder at its disposal. Fear of violence is a central issue: according to one study, nearly 60,000 Brazilians lost their lives to violence in 2014 alone. It’s widely understood that the authorities are unable or unwilling to control high crime rates, and this insecurity fosters extremely punitive attitudes towards stereotyped groups, especially the poor and criminals.

In this febrile atmosphere, armed far-right and neo-Nazi groups have been able to present themselves as the defenders of poor communities. Nothing better illustrates that than a recent lynch mob epidemic, which showed just how explosive the combination of violent insecurity and rampant individualism can be. With the BBB as powerful as ever in Congress and disgust at ineffective, corrupt government still widespread, small wonder that the far right is on the march – and that it’s finally getting global attention.

Roxana Pessoa Cavalcanti is a Lecturer in Criminology at the University of Westminster. This article was originally published on The Conversation. Read the original article.

An area the size of Switzerland belongs to the Yamomani people. But in their lust for gold illegal miners — who in the 1980s used guns and disease to kill 20 per cent of the population — continue felling trees and poisoning rivers with mercury. Authorities stage raids and destroy the miner’s equipment. But who are the illicit business interests behind the miners?