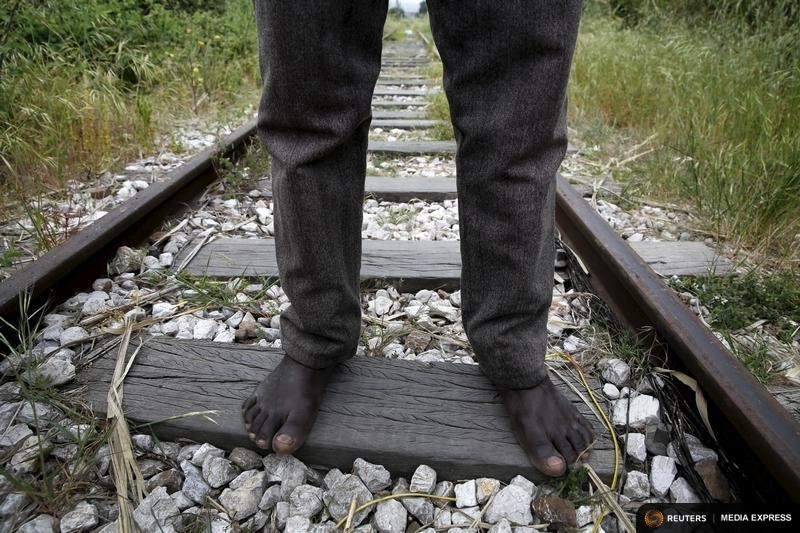 26-year-old Azam from South Sudan stands on rail tracks after failing to flee to Italy in the western Greek town of Patras April 28, 2015. Afghan, Iranian and Sudanese immigrants, living precariously in abandoned factories in Patras, southwest Greece, try to stow away on nearby ferries to Italy as they seek a better life in Europe beyond crisis-hit Greece. Shocked after as many as 900 people drowned last month in the worst Mediterranean shipwreck in living memory, European Union leaders have agreed to triple funding for sea patrols, but disagreement persists on what to do with those fleeing conflict and poverty in the Middle East and Africa. Some in Patras are recent arrivals, often travelling via Turkey, others have languished in the empty buildings for as long as two years. REUTERS/Yannis Behrakis

LONDON (Thomson Reuters Foundation) – Europe is grappling for answers to its worst refugee crisis since World War Two with the crisis testing the unity of the 28-nation European Union and fuelling anti-immigration sentiment.

European Union members are struggling to cope with record numbers of people fleeing war and poverty and heading across Europe by land and sea.

Nearly 300,000 people have crossed the Mediterranean this year with 2,373 migrants and refugees dying in a bid to reach Europe, nearly 300 more than the same period last year, according to the International Organization for Migration (IOM).

The terms refugee, asylum seeker and migrant are often used interchangeably to describe people on the move but there are major differences and different requirements regarding their treatment. These differences are explained below:

WHO IS A REFUGEE?

A refugee is a person who has left his or her own country fearing persecution because of race, nationality, membership of a particular social group or political opinion, according to the United Nations. Refugees have no protection from their own state. It can be their own government that is threatening to persecute them. Recognition as a refugee provides protection under international laws and conventions, mainly the 1951 U.N. Refugee Convention, and support from the U.N. refugee agency (UNHCR) with food, shelter and safety.

WHAT ARE YOUR OPTIONS AS A REFUGEE?

Refugees have three options: repatriation to the country they fled from, integration into their host country, or resettlement in another country.

HOW MANY REFUGEES ARE THERE GLOBALLY?

The United Nations estimates there were 19.5 million refugees worldwide at the end of 2014, around 2.9 million more than in 2013. The number of people forcibly displaced was 59.5 million with 38.2 million displaced within their own country and known as internally displaced people (IDPs) with 1.8 million asylum seekers.

WHO IS AN ASYLUM SEEKER?

WHO IS A MIGRANT?

Migrants and refugees often travel in the same way but migrants choose to leave their country for reasons not related to persecution. They may want to study abroad, reunite with family, or improve the future economic prospects of themselves and their families. A migrant continues to enjoy the protection of his or her own government even when abroad. Refugees have to move to save their lives or preserve their freedom.

WHO IS AN ILLEGAL IMMIGRANT?

An illegal immigrant is often someone who has arrived in a country on a legal visa but overstays this visa. Asylum seekers can become illegal immigrants if their claim to refugee status fails and they remain in the host country.

WHAT ABOUT ECONOMIC MIGRANTS?

Migrants and refugees often travel in the same way but economic migrants choose to leave their country to improve the future economic prospects of themselves and their families. Refugees have to move to save their lives or preserve their freedom.

*Facts and Opinions is a boutique journal, of reporting and analysis in words and images, without borders. Independent, non-partisan and employee-owned, F&O is funded by you, our readers. We do not carry advertising or “branded content,” or solicit donations from foundations or causes. Please support us, with a subscription (click here for our subscribe page) or a donation, and/or by spreading the word.