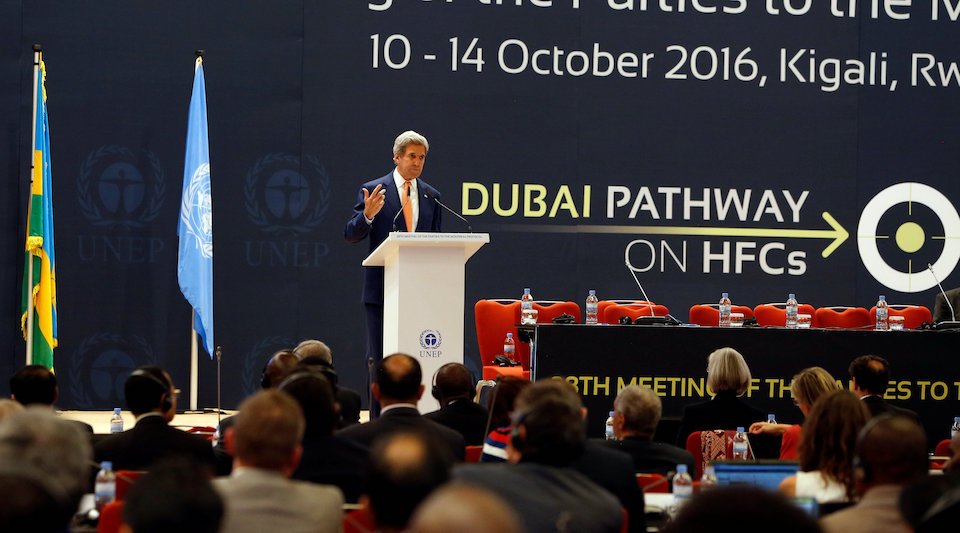 U.S. Secretary of State John Kerrydelivers his keynote addres to promote U.S. climate and environmental goals, at the Meeting of the Parties to the Montreal Protocol on the elimination of hydro fluorocarbons (HFCs) use, held in Rwanda’s capital Kigali, October 14, 2016. REUTERS/James Akena

KIGALI (Reuters) – Nearly 200 nations have agreed a legally binding deal to cut back on greenhouse gases used in refrigerators and air conditioners, a major move against climate change that prompted loud cheers when it was announced on Saturday.

The deal, which includes the world’s two biggest economies, the United States and China, divides countries into three groups with different deadlines to reduce the use of factory-made hydrofluorocarbon (HFC) gases, which can be 10,000 times more powerful than carbon dioxide as greenhouse gases.

“While diplomacy is never easy, we can work together to leave our children a planet that is safer, more prosperous, more secure, and more free than the one that was left for us,” the White House said in a statement on the deal.

U.S. Secretary of State John Kerry said the deal was “a monumental step forward” as he left the talks in the Rwandan capital of Kigali late on Friday.

Under the pact, developed nations, including much of Europe and the United States, commit to reducing their use of the gases incrementally, starting with a 10 percent cut by 2019 and reaching 85 percent by 2036.

Many wealthier nations have already begun to reduce their use of HFCs.

Two groups of developing countries will freeze their use of the gases by either 2024 or 2028, and then gradually reduce their use. India, Iran, Iraq, Pakistan and the Gulf countries will meet the later deadline.

They refused the earlier date because they have fast-expanding middle classes who want air conditioning in their hot climates, and because India feared damaging its growing industries.

“Last year in Paris, we promised to keep the world safe from the worst effects of climate change. Today, we are following through on that promise,” said U.N. environment chief Erik Solheim in a statement, referring to 2015’s Paris climate talks.

The deal binding 197 nations crowns a wave of measures to help fight climate change this month. Last week, the 2015 Paris Agreement to curb climate-warming emissions passed its required threshold to enter into force after India, Canada and the European Parliament ratified it.

But unlike the Paris agreement, the Kigali deal is legally binding, has very specific timetables and has an agreement by rich countries to help poor countries adapt their technology.

A quick reduction of HFCs could be a major contribution to slowing climate change, avoiding perhaps 0.5 degrees Celsius (0.9 Fahrenheit) of a projected rise in average temperatures by 2100, scientists say.

Environmental groups had called for an ambitious agreement on cutting HFCs to limit the damage from the roughly 1.6 billion new air conditioning units expected to come on stream by 2050, reflecting increased demand from an expanding middle class in Asia, Latin America and Africa.

Benson Ireri, a senior policy adviser at aid group Christian Aid, said that all African countries had volunteered for the earlier deadline because they worried about global warming pushing more of their citizens into poverty.

“It was a shame that India and a handful of other countries chose a slower time frame for phasing down HFCs but the bulk of nations, including China, have seen the benefits of going for a quicker reduction. It’s also been encouraging to see small island states and African countries a part of this higher ambition group,” he said in a statement.

A scientific panel advising the signatories to the deal said phasing out HFCs will cost between $4 billion and $6 billion, said Manoj Kumar Singh, India’s joint secretary at the Ministry of Environment, Forest and Climate Change.

“The implementation starts from 2024 onwards so there is enough time to plan and mobilise finance,” he told Reuters.

Donors had already put $80 million in a fund to start implementing the agreement, said Gina McCarthy, administrator of the U.S. Environmental Protection Agency.

But Sergey Vasiliev, the head of the Russian delegation, said Russia’s estimates of the costs were higher and argued countries’ contributions to a multilateral fund to help poor countries adapt their technology should be voluntary.

The details of the funding will be finalised at a later meeting.

“We think it is more than $10 billion and some experts estimated up to $20 billion,” he told Reuters.

The HFC talks build on the 1987 Montreal Protocol, which succeeded in phasing out the use of chlorofluorocarbons (CFCs), widely used at that time in refrigeration and aerosols.

The protocol contains provisions for noncompliance, ranging from the provision of technical and financial assistance to trade sanctions in ozone depleting substances, which will be widened to include HFCs.

The original aim of the Montreal Protocol was to stop the depletion of the ozone layer, which shields the planet from ultraviolet rays linked to skin cancer and other conditions.