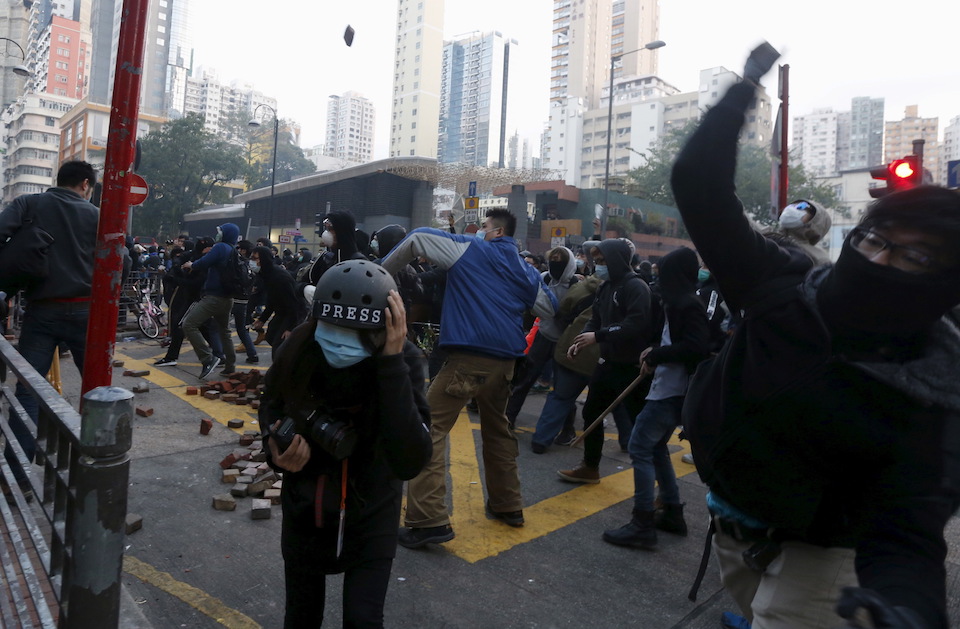 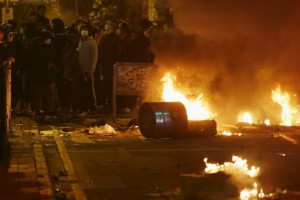 Protesters stand behind a fire set by them at a junction at Mongkok district in Hong Kong, China February 9, 2016. REUTERS/Bobby Yip

Demonstrators prised bricks from the sidewalk to hurl at police, while others toppled street signs and set fire to rubbish bins in Mong Kok, a tough, working-class neighbourhood just across the harbour from the heart of the Asian financial centre.

“We have noticed a shift in some members of the public,” said Hong Kong Police Commissioner Lo Wai-chung. “(They) have an inclination to use violence or radical acts in order to express their opinion.”

Nearly 90 police sustained injuries ranging from fractured bones to lacerations and bruises and 54 protesters were arrested, Lo said. Hong Kong television showed police officers being beaten with poles and sticks as they lay on the ground.

Many protesters and police were also shown with blood streaming down their faces.

Police said two warning shots were fired into the air, with pepper spray and batons also used to disperse the crowd. Television footage showed the shots were fired as protesters surrounded traffic police, pelting them with rubbish, bricks and bottles and wrestling one of them to the ground.

Lo said the life of the officer who fired the shots was being threatened. He also said there would be a full investigation into the incident.

Facts and Opinions is employee-owned and relies on the honour system: enjoy one free story. If you value independent, no-spam, no-ads,expert journalism, support us with a minimum of .27 per story, a $1 day site pass, or $20 per year. Donate below. Please share the link instead of copying and pasting; our survival depends on our copyright is our . Details here. 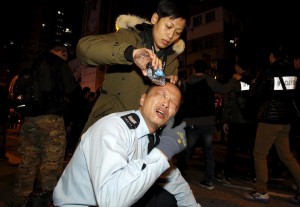 The remains of burned bins and flower pots, chunks of brick and broken bottles lay scattered along the Nathan Road shopping strip, which leads to the harbour at Tsim Sha Tsui. A taxi with shattered windows was parked nearby.

The narrow streets in and around Mong Kok were the scene of some of the most violent clashes during protests in late 2014 to demand greater democracy for the former British colony that returned to Beijing rule in 1997.

The violence broke out after police moved in to clear illegal vendors who sell local delicacies, trinkets and household goods from makeshift streetside stalls.

The protesters had dispersed by 8 a.m. (0000 GMT) but more than 100 had confronted police in a tense, pre-dawn stand-off during the Lunar New Year holiday, when most of the city is shut down.

Hong Kong Indigenous, a “localist” group that is fielding a candidate in a Legislative Council by-election in a few weeks, was involved in the protest, though it was not immediately clear the role it played or the extent to which it was involved.

The group said on its official Facebook page and confirmed to Reuters that its candidate, Edward Leung Tin-kei, had been arrested.

Many so-called localists remain deeply embittered by the lack of any concessions from Beijing or Hong Kong authorities during the 2014 protests. Television footage showed protesters on Tuesday shouting: “Establish a Hong Kong country!” during running battles with police.

The clashes in December 2014 came when authorities cleared the last of pro-democracy demonstrators from the streets after more than two months of protests that had presented Beijing with one of its greatest political challenges in decades.

The only surprise in the Monday night clashes between Hong Kong police and demonstrators demanding self-rule is that it hasn’t happened before.