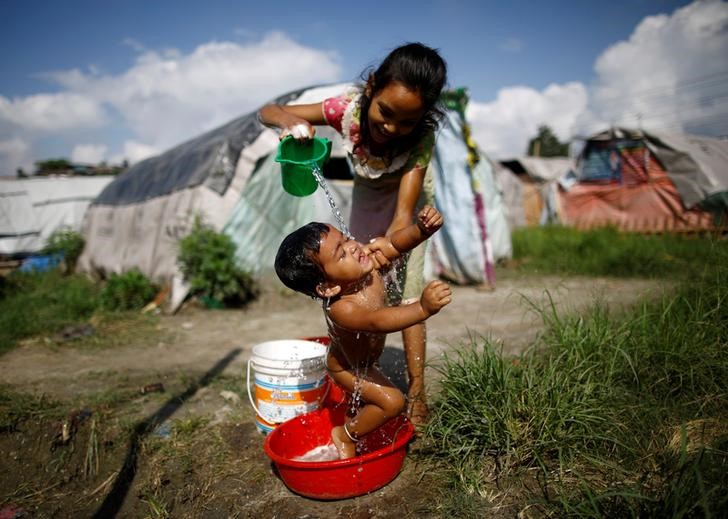 HOKSHE, Nepal (Thomson Reuters Foundation) – Farmer Ganesh Prasad Gautam beamed as the young woman behind the desk littered with files called his name out at the rundown government office in the mountains of central Nepal.

After 18 months of living in a shack made of corrugated iron, tarpaulin and bamboo amid the ruins of his earthquake-hit house, he is finally receiving long-promised government funds to start rebuilding his home.

The 54-year-old farmer was one of eight million people affected in April last year when a 7.8-magnitude quake struck the Himalayan nation – leaving 9,000 dead and destroying one million homes as well as schools, businesses roads, and bridges.

“The money is late and it’s not enough to build what I had before, but at least the government has given it,” Gautam said to nods from fellow villagers gathered at the office in Hokshe village, 64 km (40 miles) east of Kathmandu.

“We’ve already endured one winter and two monsoons like this – out in the open with no protection from the rain and cold.”

But Gautam is one of the lucky ones.

Constant feuding between a myriad of political parties has fuelled political turmoil and weak governance in Nepal, delaying efforts to rebuild the country of 28 million people despite an outpouring of aid, analysts said.

Ongoing political instability in a country which has seen 24 governments in 26 years has stymied reconstruction efforts.

“You are looking at a country that has had three governments since the earthquake – all coalitions and none with a solid majority,” said Renaud Meyer, Country Director for the United Nations Development Programme (UNDP) in Nepal.

“There is no doubt the political landscape is the biggest barrier for the recovery and reconstruction of Nepal to take place. It requires consistency, it requires determination and the less open it is to spoilers, the better.”

Wedged between India and China, Nepal – famed as the birthplace of Buddha and home to Mount Everest – is one of the world’s poorest countries.

A decade-long civil war between Maoist rebels and government forces ended in 2006, raising hopes of development in a country where one in four people live on less than $1.90 a day – the World Bank’s measure of extreme poverty.

The three main parties – the Nepali Congress (NC), Communist Party of Nepal (Maoist-Centre) and the Unified Marxist Leninist (UML) – have over the years made unlikely bedfellows in fragile coalitions and politicians are seen as selfish and power hungry.

Even though a new charter was adopted in September 2015, and a new coalition government led by Khadga Prasad Oli’s UML party took power, the historic moment was marred by bloodshed in street clashes in the southern Terai region bordering India.

More than 50 people died in the crisis, which forced Oli to resign nine months after taking power as his main coalition partner, the Maoist Centre party, withdrew its support.

As a result, families are only now receiving the first installment of a promised 200,000 rupee ($1,880) housing grant.

But for some Nepalis, the funds are too little, too late.

Down the road from the five-star Hyatt Regency hotel in Chuchepati on the outskirts of Kathmandu, amid the hundreds of blue and white plastic tents which make up a displacement camp, housewife Shanti Pariyar, 42, complains of sleepless nights.

Little food, daily treks to queue for two jerry cans of clean water, few toilets, no privacy to bathe and monsoon rains which flood her tarpaulin tent are bad enough, she said.

But what keeps her up at night is the 300,000-rupee ($2,815) debt she has racked up since her village home was destroyed, forcing her family to move to the capital in search of work.

“I borrowed from my sisters in Dubai and also took credit from the grocery store for food, but now there is pressure as they want their money back,” said Pariyar who is from Jiri village in Dolakha district, 75 km (47 miles) from Kathmandu.

“Our lives have changed after the earthquake. Before I had a dream to educate my kids and make them doctors and engineers. Now I can’t even feed them.”

Since the NRA was established in January, reconstruction work has picked up dramatically with more than 2,700 engineers recruited to survey damaged and destroyed houses nationwide.

The government has signed agreements with 58 banks and financial institutions to distribute housing grants with first installments disbursed to 432,000 households.

NRA’s CEO Sushil Gyawali said the government wants to turn the disaster into an opportunity to “build back better” with housing grants subject to adherence of the country’s building codes to encourage people to build more resilient homes.

“If you count from the day the NRA was established, we have made good progress and that has been appreciated by everyone,” said Gyawali, a civil engineer.

“We want to make it faster, but if we are in a hurry and don’t plan, we may not be building back better.”

Under a power-sharing agreement between his party and Maoist leader Pushpa Kamal Dahal, who parliament voted as premier in August, Dahal will serve as prime minister until May, and then hand over power to Nepali Congress chairman Sher Bahadur Deuba.

That transition – as well as national elections due by January 2018 – could amount to even more delays in efforts to rebuild the country, development experts say.

Not only with each change in government comes changes in policy, but also the replacement of thousands of public servants across the country – from village to national level – who are generally appointed based on their political affiliations.

There is a concern the delay means people will not wait and will borrow money to rebuild basic structures again.

“The people don’t wait, so if they can get some funds from somewhere, they will build a new home, but they will not get the technical guidance, knowledge and expertise to build a safer house,” said UNDP’s Meyer.

“It’s a hot pursuit – a race against time – to provide that help to people to ensure that the 9,000 people who died did not die for nothing. You don’t want more to die in the next earthquake.”

Nepal Then: a doctor’s journey, by Christine Gibson,  April/May 2015

There are terrible forces at work in Nepal, by Renee Comesotti