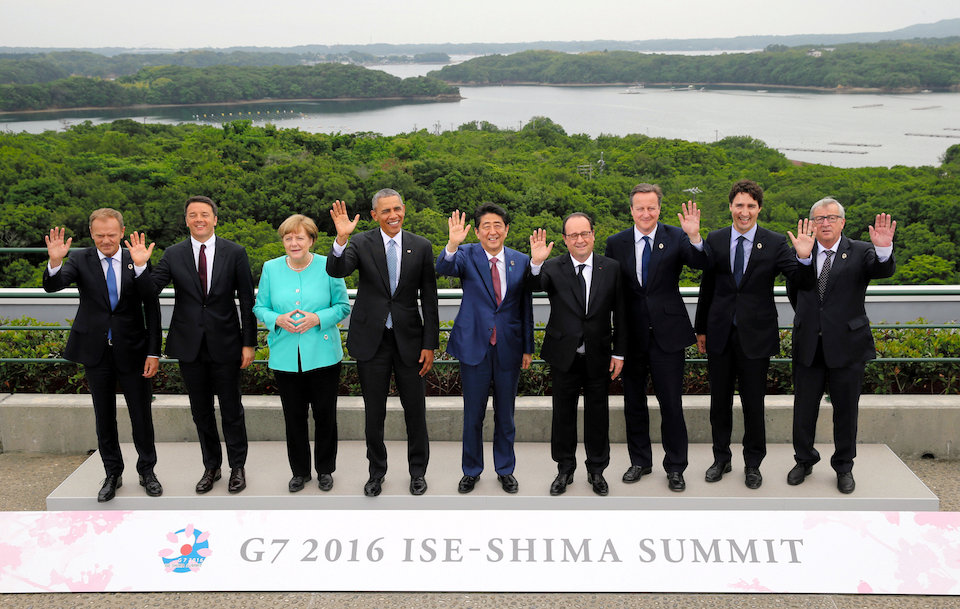 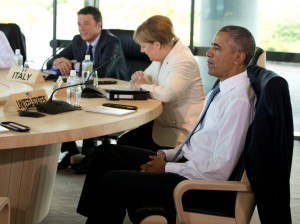 The G7 wrapped up its 2016 summit with warnings, of risks to economic growth, health threats from microbes resistant to antibiotics and the handling of health emergencies, as well as a loss of public trust in tax systems to the need for infrastructure investment and trade agreements.

Always a document crafted of diplomacy, with hard issues at times reduced to milquetoast, this year’s statement ran over 30 pages and occasionally bristled.

Threats to global growth include the risk of a “Brexit” — British exit from Europe — in the United Kingdom referendum in June;  “escalated geo-political conflicts, terrorism and refugee flows;”  and violent extremism and terrorist attacks that “pose serious threat to the existing rule based international order, and common values and principles of “freedom, democracy, the rule of law and respect for human rights.”

The G7  statement, following a summit in Japan from May 26 to 27, is worth at least a scan, not least because the organization — more so than the United Nations and its agencies — is arguably the closest thing the world has to a global government body with real-world influence. The criteria for membership includes wealth and a  high Human Development Index, and today includes Canada, France, Germany, Italy, Japan, the United Kingdom, and the United States, with the European Union represented,

Global growth is the urgent priority, and the group said it would support fiscal, monetary and structural policies to strengthen demand and tackle supply constraints.

Free trade and several free trade agreements now in progress  —  many increasingly contentious in the current American election cycle and cited as helping the rise of far-right  factions — ranked third on a list of commitments. “We reaffirm our commitment to keep our markets open and to fight all forms of protectionism” said the G7, and stressed its commitment to eliminate”market distorting measures” — specifically citing the steel sector, a contentious issue with China.

The group committed to tackle medical research and development including on microbial resistance to antibiotics, and “to promote Universal Health Coverage,” a hot-button topic in America. It pledged to lead the response to public health emergencies, usually the bailiwick of the World Health Organization. And, in a sharp comment, it said “the Ebola outbreak turned into a major epidemic partly due to the lack of swift and coordinated actions among relevant stakeholders,” and said reform of the WHO is needed for “prompt and effective responses to public health emergencies.”

Equality for and empowerment of women received a separate note of commitment, identifying a need for education and training and promoting women in science, technology, engineering and math.

Other pledges included “an accessible, open, interoperable, reliable and secure cyberspace;” a pledge to fight corruption and improve transparency, and law enforcement cooperation.

Climate change was listed at the bottom of the G7’s priorities, a placement that may or may not have meaning. The group statement said:

“The G7, continuing to take a leadership role, commits to taking the necessary steps to secure ratification, acceptance or approval of the Paris Agreement as soon as possible, and calls on all Parties to do so striving for a goal of entry into force in 2016. We commit to take the lead by early, transparent and robust implementation of our nationally determined contributions, and promoting increased ambition over time. We also commit to actively participate in the regular review of global stock-take progress every five years. We commit to formulate and communicate ambitions mid-century long-term low greenhouse gas (GHG) emission development strategies well ahead of the 2020 deadline. “

It added, “we are determined to accelerate our work towards the transition to an energy system that enables a decarbonization of the global economy, and commit to further invest in supporting innovation in energy technologies and encouraging clean energy and energy efficiency …

Wikipedia page for the G7: of Canada, France, Germany, Italy, Japan, the United Kingdom, and the United States. 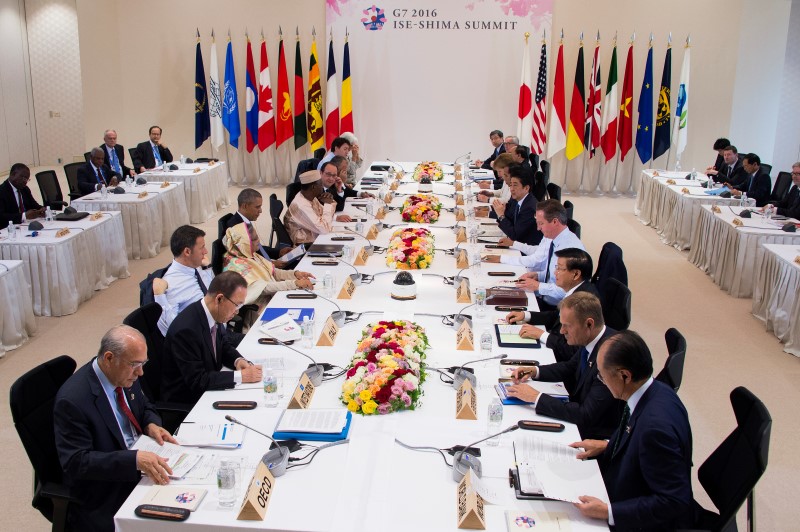 Leaders attend the the first Outreach Session during the second day of the Group of Seven (G7) summit meetings in Ise Shima, Japan, May 27, 2016. REUTERS/Jim Watson/Pool

By Yuka Obayashi and Ami Miyazaki 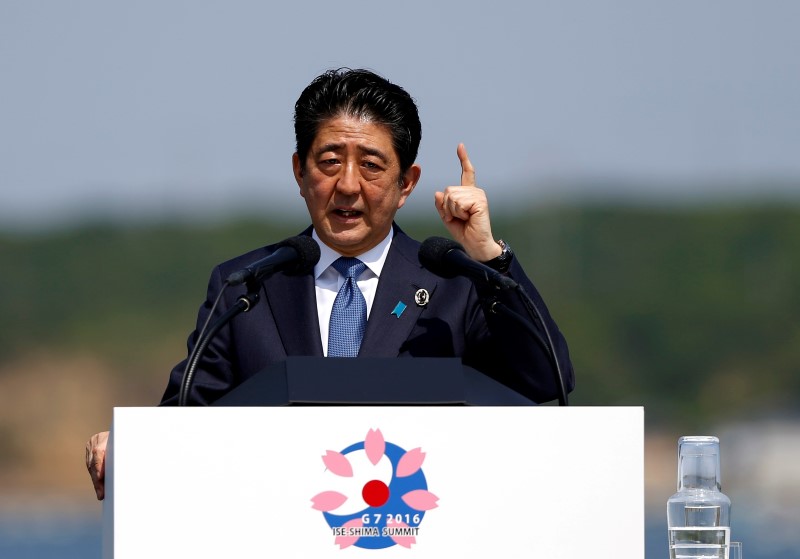 TOKYO/ISE-SHIMA, JAPAN (Reuters) – Leaders of the Group of Seven (G7) pledged on Friday to tackle a global glut in steel, though their statement did not single out China, which produces half of the world’s steel and is blamed by many countries for flooding markets with cheap steel.

While not included in the text, China was brought up in the discussions among leaders of the G7 industrial powers, a senior Japanese government spokesman told reporters.

China insists that its steel exports do not violate trade rules nor are its policies designed to encourage mills to sell overseas. It also says it has sought to reduce tax rebates on exported steel.

But with steel mills from Australia to Britain under threat of closure, pressure is mounting on Beijing to cut capacity after output hit a record high earlier this year.

“We recognise the negative impact of global excess capacity across industrial sectors, especially steel, on our economies, trade and workers,” said the statement.

“We are committed to moving quickly in taking steps to address this issue by enhancing market function, including through coordinated actions that identify and seek to eliminate … subsidies and support,” it added.

Leaders of the G7 – which comprises Britain, Canada, France, Germany, Italy, Japan and the United States – met this week near Nagoya, a Japanese car production and steel manufacturing centre.

“The reference to steel overcapacity is significant as it underlines that the G7 nations are firmly united in dealing with the issue,” a Japanese industry ministry official told Reuters.

“China’s main focus is domestic issues rather than foreign concerns, such as protecting jobs and preventing bankruptcies,”

Yet China’s crude steel output hit a record high of 70.65 million tonnes in March as rising prices and better margins prompted some mills to resume production.

“China knows it needs to slash capacity, but it will take time,” Miura said, predicting trade actions and price competition worldwide to continue.

EU lawmakers rejected this month any loosening of trade defences against China, whose eligibility for market economy status is being debated by the European Union.

The G7 should acknowledge that government subsidies and China’s state-owned steel mills are the major contributors to the global excess capacity, Philip Bell, president of the U.S. Steel Manufacturers Association, said in an email.

(Additional reporting by Nick Carey in CHICAGO and David Stanway in BEIJING; Editing by Aaron Sheldrick and Ed Davies)