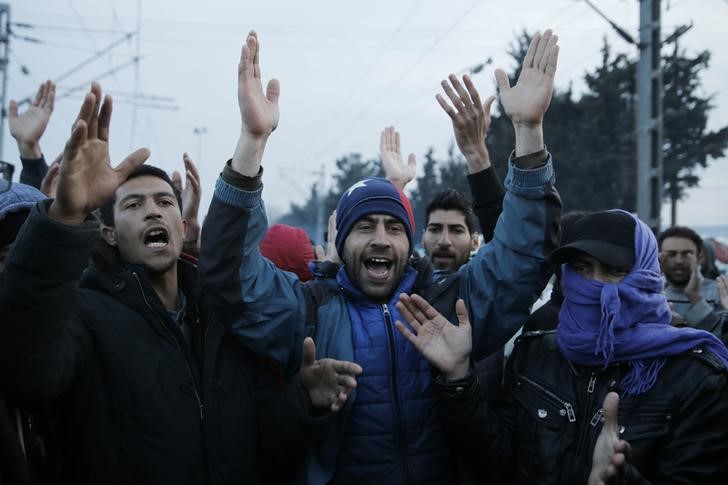 Migrants chant during a protest asking for the opening of borders at a makeshift camp at the Greek-Macedonian border near the village of Idomeni, Greece, March 18, 2016. REUTERS/Alkis Konstantinidis

BRUSSELS (Reuters) – The European Union sealed a controversial deal with Turkey on Friday intended to halt illegal migration flows to Europe in return for financial and political rewards for Ankara.

The accord aims to close the main route by which a million migrants and refugees poured across the Aegean Sea to Greece in the last year before marching north to Germany and Sweden.

But deep doubts remain about whether it is legal or workable, a point acknowledged even by German Chancellor Angela Merkel who has been the key driving force behind the agreement.

“I have no illusions that what we agreed today will be accompanied by further setbacks. There are big legal challenges that we must now overcome,” Merkel said after the 28 EU leaders concluded the deal with Turkish Prime Minister Ahmet Davutoglu.

“But I think we’ve reached an agreement that has an irreversible momentum,” Merkel said, adding it showed that the EU was still capable of taking difficult decisions and managing complex crises. 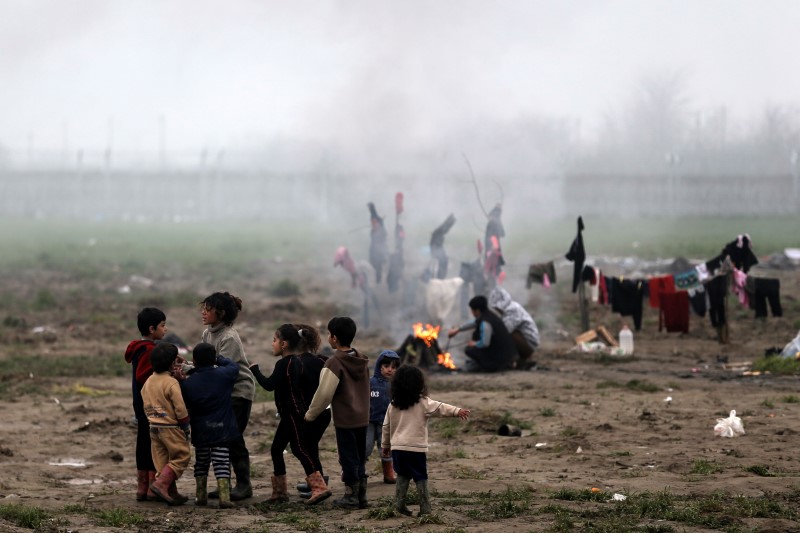 Refugee children play at a makeshift camp for refugees and migrants at the Greek-Macedonian border near the village of Idomeni, Greece, March 18, 2016. REUTERS/Alkis Konstantinidis

Under the pact, Ankara would take back all migrants and refugees, including Syrians, who cross to Greece illegally across the sea. In return, the EU would take in thousands of Syrian refugees directly from Turkey and reward it with more money, early visa-free travel and faster progress in EU membership talks.

Migrants who arrive in Greece from Sunday will be subject to being sent back once they have been registered and their individual asylum claim processed. The returns are to begin on April 4, as would resettlement of Syrian refugees in Europe. 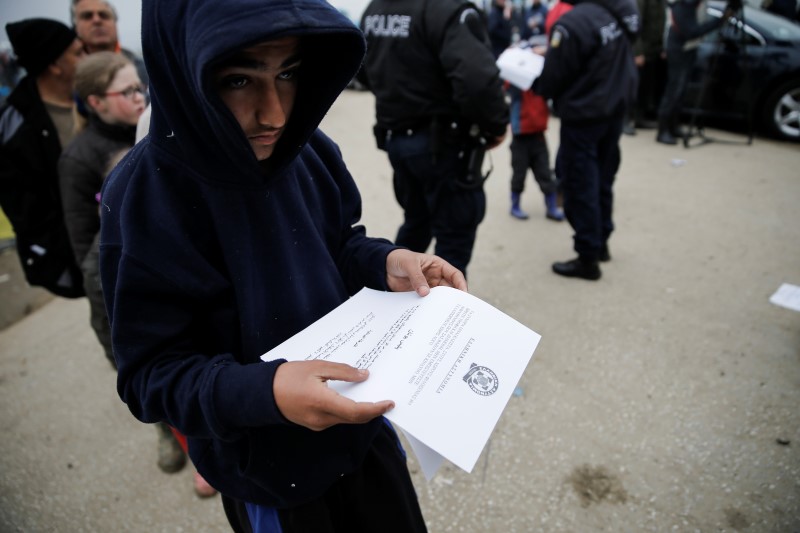 A boy reads an announcement distributed by Greek police officers informing refugees and migrants that the borders to Macedonia are closed and they should consider moving to relocation centers, at a makeshift camp at the Greek-Macedonian border near the village of Idomeni, Greece, March 18, 2016. REUTERS/Alkis Konstantinidis

While many in Brussels hailed the agreement as a game-changer, Amnesty International decried it as a “historic blow to human rights”, saying Europe was turning its back on refugees.

“Guarantees to scrupulously respect international law are incompatible with the touted return to Turkey of all irregular migrants,” the rights advocacy group said, criticising Ankara’s track-record on human rights.

“Turkey is not a safe country for refugees and migrants, and any return process predicated on it being so will be flawed, illegal and immoral.”

Turkey’s human rights record has drawn mounting criticism amid a crackdown on Kurdish separatists, arrests of critical journalists and the seizure of its best-selling newspaper.

Dutch Prime Minister Mark Rutte sought to reverse the narrative, saying the idea was to discourage illegal and perilous voyages across the Aegean and open legal paths to Europe instead.

“There is nothing humanitarian in letting people, families, children, step on boats, being tempted by cynical smugglers, and risk their lives,” he said. 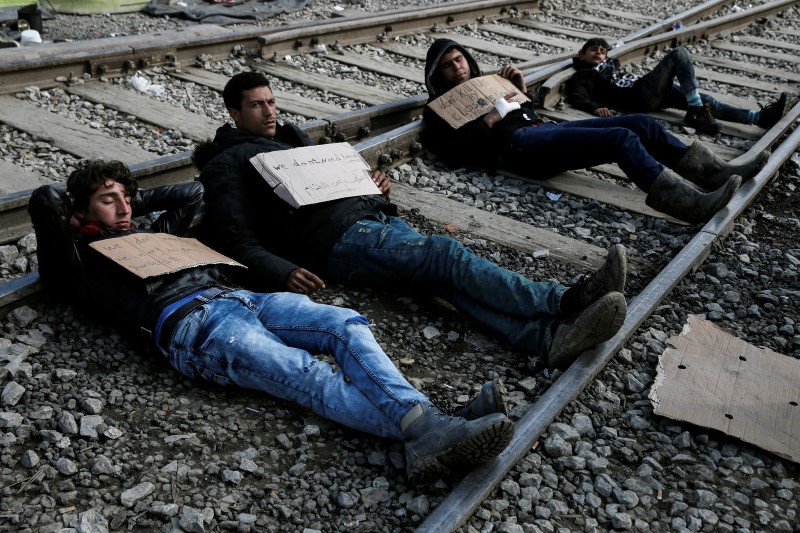 Syrian refugees protest on railway tracks demanding the opening of the borders, at a makeshift camp at the Greek-Macedonian border near the village of Idomeni, Greece, March 18, 2016. REUTERS/Alkis Konstantinidis 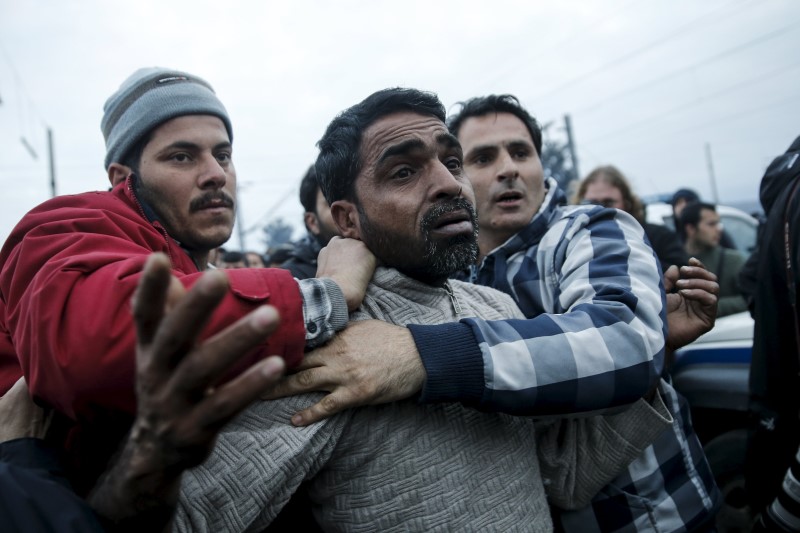 Refugees drag another refugee to the police, accusing him of abusing a young girl, at a makeshift camp at the Greek-Macedonian border near the village of Idomeni, Greece, March 17, 2016. REUTERS/Alkis Konstantinidis

The EU would also accelerate disbursement of 3 billion euros already pledged in support for refugees in Turkey and provide a further 3 billion by 2018. It would help Greece set up a task force of some 4,000 staff, including judges, interpreters, border guards and others to manage each case individually.

“All new irregular migrants crossing from Turkey into Greek islands as from 20 March 2016 will be returned to Turkey. This will take place in full accordance with EU and international law, excluding any kind of collective expulsion,” the deal said.

European Commission President Jean-Claude Juncker said it would be a Herculean task for Greece to handle the returns and the chairman of the EU leaders’ summits, European Council President Donald Tusk, said the deal was not a silver bullet.

Just as the deal was clinched, Turkey said it had intercepted hundreds of migrants trying to reach the Greek island of Lesbos. 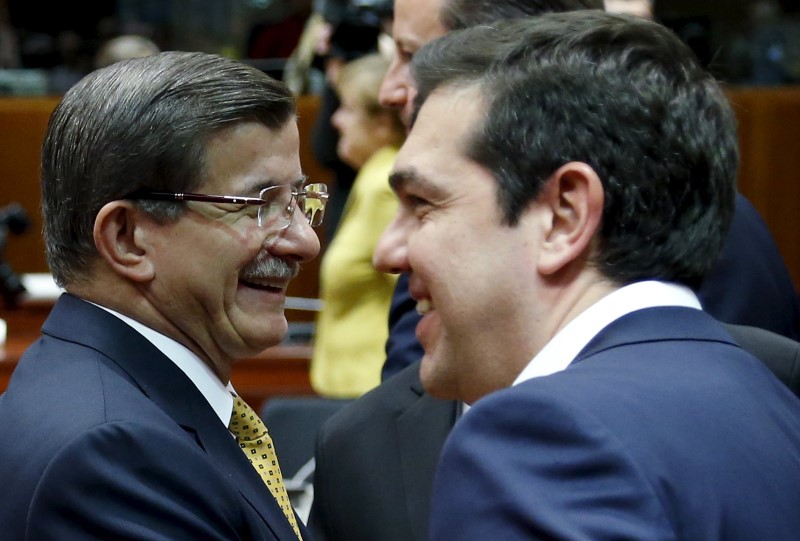 “It’s a historic day today because we reached a very important agreement between Turkey and the EU,” Davutoglu said. “Today we realised that Turkey and EU have the same destiny, the same challenges and the same future.”

Turkey’s four-decade-old dispute with Cyprus had been a key stumbling block. Cypriot President Nicos Anastasiades insisted there could be no opening of new “chapters” in Turkey’s EU talks until Ankara de facto recognises the Cypriot state.

But the issue was sidestepped as EU leaders agreed to open a negotiating chapter that was not one of the five blocked by Nicosia. Anastasiades said he was “fully satisfied” after the sides agreed to swiftly open only chapter 33 on budget policy.

Ankara’s central objective — visa-free travel for Turks to Europe by June — would still depend on Turkey meeting 72 long-standing EU criteria.

Facing a backlash from anti-immigration populists across Europe, the EU is desperate to stem the influx but faced legal obstacles to blanket returns of migrants to Turkey.

EU partners would provide additional manpower and resources to help Athens cope with the new challenge and with a backlog of 43,000 migrants already bottled up on its territory.

While the talks were in progress, Turkish President Tayyip Erdogan accused the EU of hypocrisy over migrants, human rights and terrorism, as supporters of the militant Kurdistan Workers Party (PKK) set up protest tents near the summit venue.

Erdogan said Europe was “dancing in a minefield” by directly or indirectly supporting terrorist groups.

“At a time when Turkey is hosting three million, those who are unable to find space for a handful of refugees, who in the middle of Europe keep these innocents in shameful conditions, must first look at themselves,” he said in a televised speech. 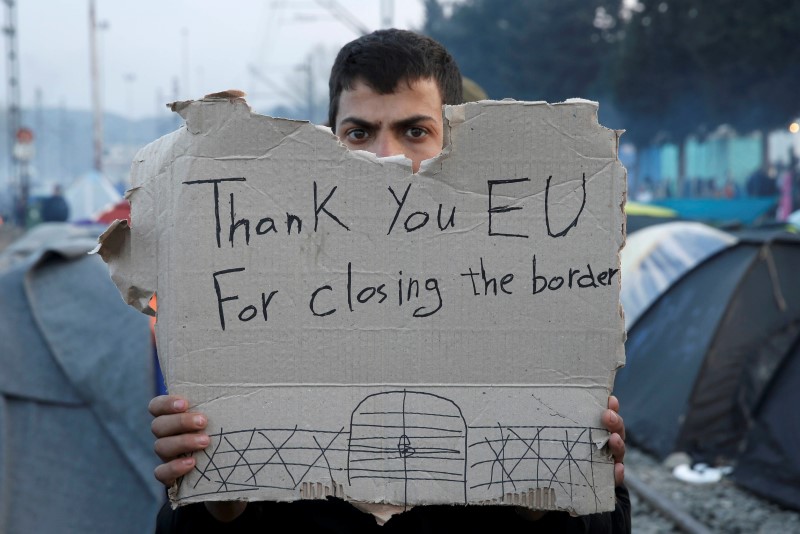 A refguee holds a message, “Thank you EU for closing the border” during a protest asking for the opening of borders at a makeshift camp at the Greek-Macedonian border near the village of Idomeni, Greece, March 18, 2016. REUTERS/Alkis Konstantinidis

BRUSSELS (Reuters) – Following are key elements as well as question marks over an agreement sealed between the European Union and Turkey to stem the flow of migrants to Greek islands in return for financial and political concessions:

Anyone who crosses to Greek islands from the Turkish coast from Sunday will be returned to Greece, with expulsions expected to start from April 4.

EU member states will meet again on Saturday to pull together the task force and it is for member states, notably Germany, to provide the necessary personnel.

Amnesty International and Doctors Without Borders said the deal was only aimed at keeping desperate migrants and refugees off European shores and did not ensure enough protection of their rights.

For every Syrian refugee returned to Turkey, another Syrian refugee will be resettled from Turkey to the EU, with priority given to those who have not previously crossed to Greece.

EU states are divided on sharing out asylum seekers and they have outstanding voluntary offers to resettle only about 18,000. A further 54,000 places could be offered in a voluntary scheme.

The deal envisages monthly review and will be stopped if the number of returns exceed the given 72,000 places. Meant as deterrence, the scheme would then be considered a failure.

EU leaders said it would take several weeks to see if the expulsions succeed in discouraging people from risking their lives at sea to get to Europe.

Turkey to work with EU to bar other routes from opening, including via its land border with Bulgaria.

Italy is also concerned people stuck in Greece may seek to get out via Albania and the Adriatic sea. They EU also worries hundreds of thousands of people displaced in Libya could head towards Europe.

In the longer run, once EU states are satisfied that Turkey has really stopped the flow of migrants across the Aegean, the EU will admit more refugees directly from Turkey.

But the scheme is voluntary and only a handful of countries – most notably Germany – are ready to resettle more as they face a growing challenge from nationalists and far-right populists at home, as well as a public opinion increasingly hostile to immigration.

Turkey to fulfil remaining requirements – about half of 72 criteria – by the end of April so the EU executive can recommend EU states waive visas for Turks on brief trips by the end of June.

Many governments, notably France, do not want Turks coming to Europe without visas, partly on security grounds, partly due to popular fears it would mean more immigration – though only the few with modern, biometric passports would be eligible.

It is far from clear that Turkey would satisfy the criteria as among them is one requiring that Cypriots be treated like other EU citizens, something Turkey rejects since it does not recognise Cyprus as a state.

To meet all the criteria, Turkey would also have to change its laws to extend refugee protection to people now not eligible under Ankara’s restrictions on the application of the Geneva Convention.

EU will speed up disbursement of 3 billion euros previously agreed by its 28 member states to improve the living conditions of nearly 3 million Syrian refugees now in Turkey. The bloc is to identify projects under that scheme in a week.

EU will put together another 3 billion euros by 2018 after the first tranche is used, a win for Turkey as some EU governments previously opposed committing more money before seeing how Turkey delivers on its part of the agreement.

EU governments previously locked horns over how to finance the first 3 billion euros. They eventually agreed to give 2 billion euros from their national budgets and the rest from the bloc’s central coffers, with officials saying that could serve as a blueprint for the second tranche as well.

The second 3-billion-euro allocation is not a highly contagious issue now, however, because of the distant time-frame.

Cyprus had threatened to veto the deal between EU and Turkey, which backs a separatist state in the northern part of the island and does not acknowledge the island’s internationally-recognised government in Nicosia.

Cyprus has long blocked Turkey’s accession talks with the EU but negotiators found a way around that in agreeing to open, by the end of June, chapter 33 on budget policy rather than one of the five different areas in negotiations that Nicosia has been specifically blocking for years.

The bloc’s executive will come up with the appropriate proposal in April, the deal said, in only vaguely referring to accelerating work on other chapters in EU accession talks as well.

Turkey has been seeking EU’s backing in setting up “safe areas” in northern Syria though the bloc has no common military forces and those member states who do have their own military clout, were sceptical.

The EU agreed to a slightly more vague wording to “work with Turkey in any joint endeavour to improve humanitarian conditions inside Syria, in particular in certain areas near the Turkish border”.