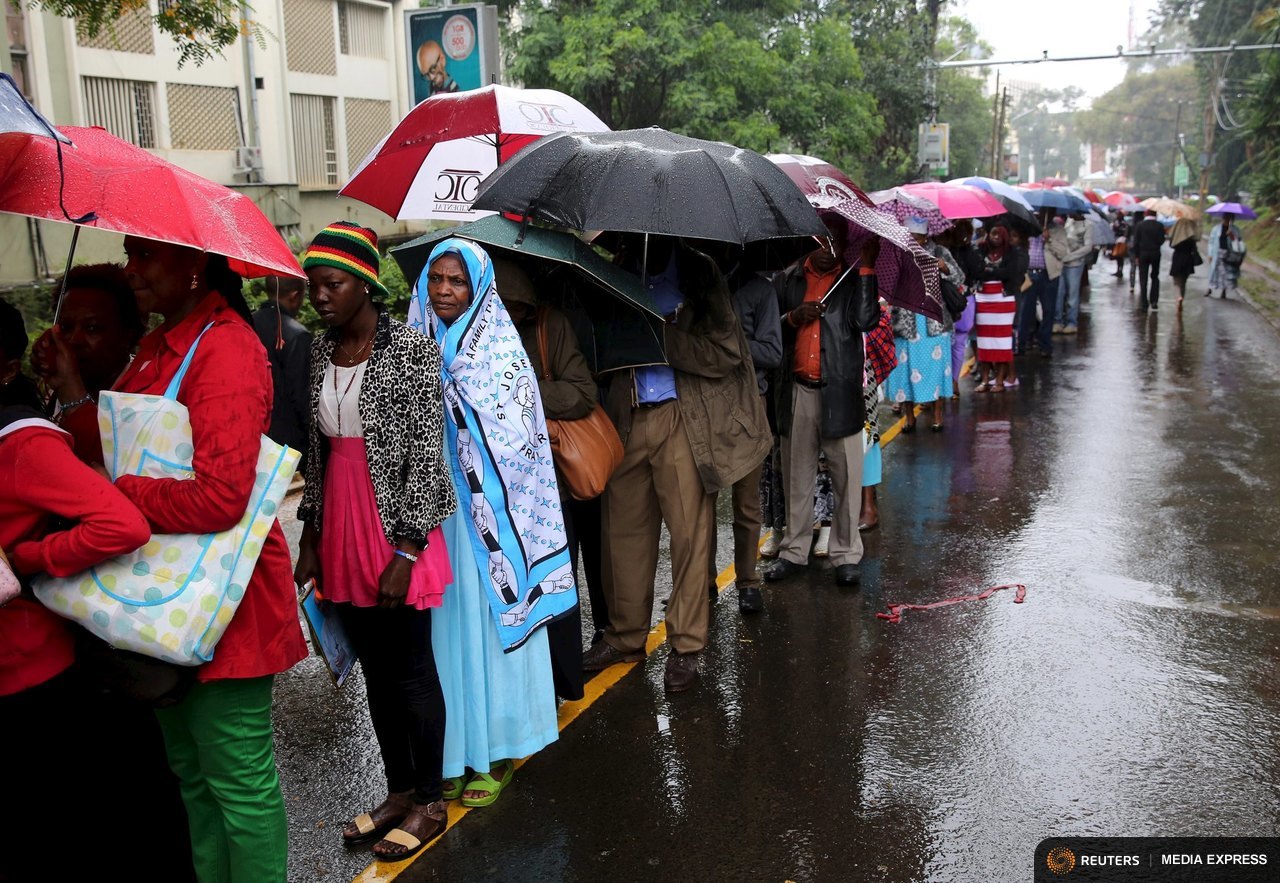 NAIROBI (Reuters) – World leaders must reach a historic agreement to fight climate change and poverty at upcoming Paris talks, facing the stark choice to either “improve or destroy the environment”, Pope Francis said in Africa on Thursday.

Francis chose his first visit to the world’s poorest continent to issue a clarion call for the success of the two-week summit, known as COP21, that starts on Monday in a French capital still reeling from Nov. 13 attacks by Islamic State militants that killed 130 people.

In a long address in Spanish at the United Nations regional office, Francis said it would be “catastrophic” if particular interests prevailed over the common good of people and the planet or if the conference were manipulated by business interests.

In Kenya, at the start of his three-nation Africa trip, the pope also said dialogue between religions was essential to teach young people that violence in God’s name was unjustified.

Bridging the Muslim-Christian divide and climate issues are major themes of the trip that also takes him to Uganda, which like Kenya has been victim of Islamist attacks, and the Central African Republic, a nation riven by sectarian conflict.

“We are confronted with a choice which cannot be ignored: either to improve or destroy the environment,” the pope said in Nairobi, home to the U.N. Environment Programme headquarters.

He noted that some scientists consider protection of the Congo basin tropical forest, which spreads over six countries and is the world’s second-largest after the Amazon, essential for the future of the planet because of its biodiversity.

Francis, who took his name from St. Francis of Assisi, the patron saint of nature, has made protecting “God’s creation” a plank of his pontificate. In June, he issued a landmark encyclical calling for urgent action to save the planet.

In his address at the U.N. compound in Nairobi, he called for action against poaching and illegal mineral exploitation in Africa and called for “a new energy system” reducing fossil fuels to the minimum and a re-think “of the current model of development”.

He said the international community had to listen to the “cry rising up from humanity and the earth itself.”

Francis, who moves on to Uganda on Friday, began his first full day in the Kenyan capital by meeting Muslim and other religious leaders before saying an open-air Mass for tens of thousands of rain-drenched people who sang, danced and ululated as he arrived in an open popemobile.

“All too often, young people are being radicalised in the name of religion to sow discord and fear, and to tear at the very fabric of our societies,” he told about 25 religious leaders, adding that inter-religious dialogue was essential and God’s name “must never be used to justify hatred and violence.”

He referred to Somalia’s al Shabaab Islamists’ 2013 attack on Nairobi’s Westgate shopping mall and this year’s assault on Garissa university. Hundreds have been killed in the past two years or so, with Christians sometimes singled out by gunmen.

In his homily at the Mass, Francis urged the faithful “to resist practices which foster arrogance in men”, speaking in a nation rattled by a series of corruption scandals.

President Uhuru Kenyatta, a Catholic who attended Mass, reshuffled his cabinet this week after several ministers were embroiled in graft allegations. 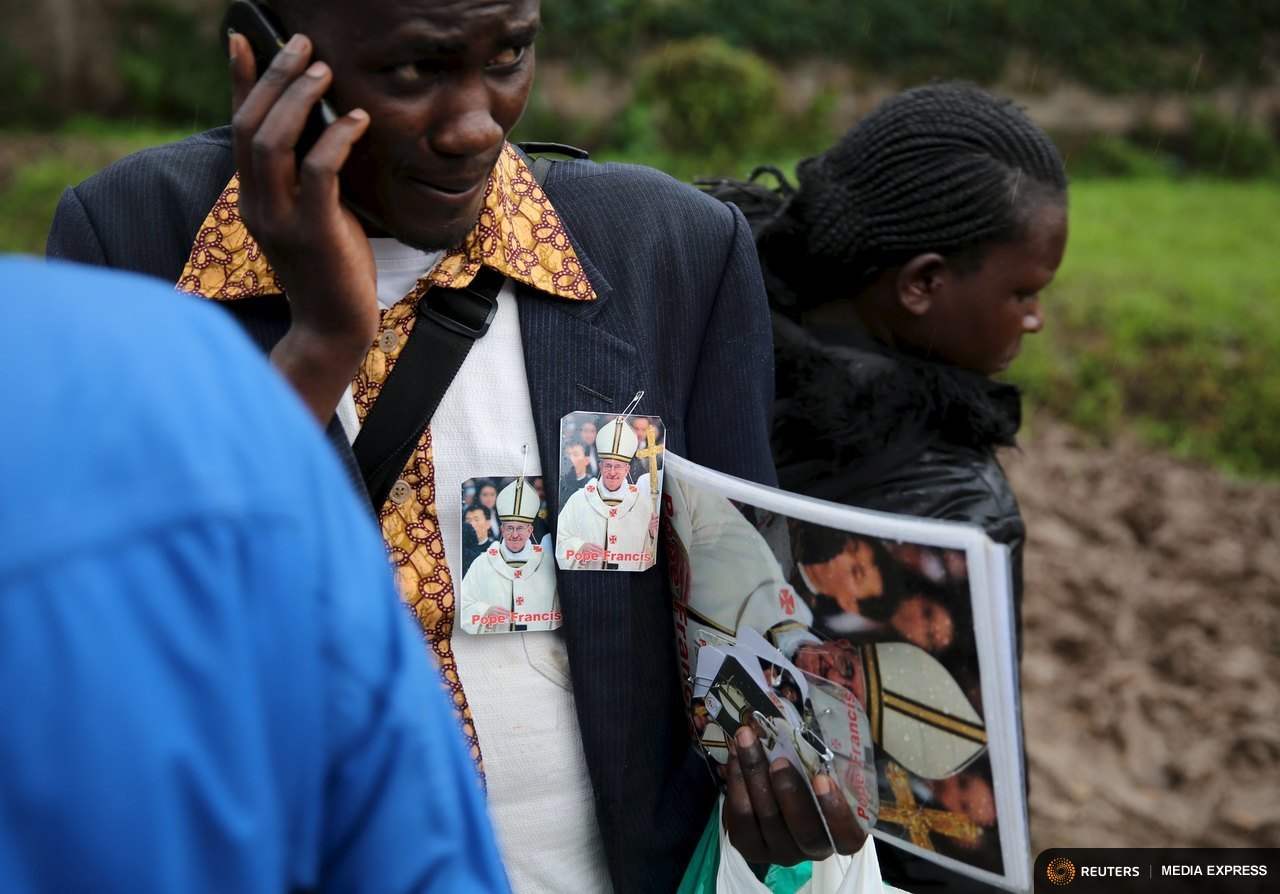 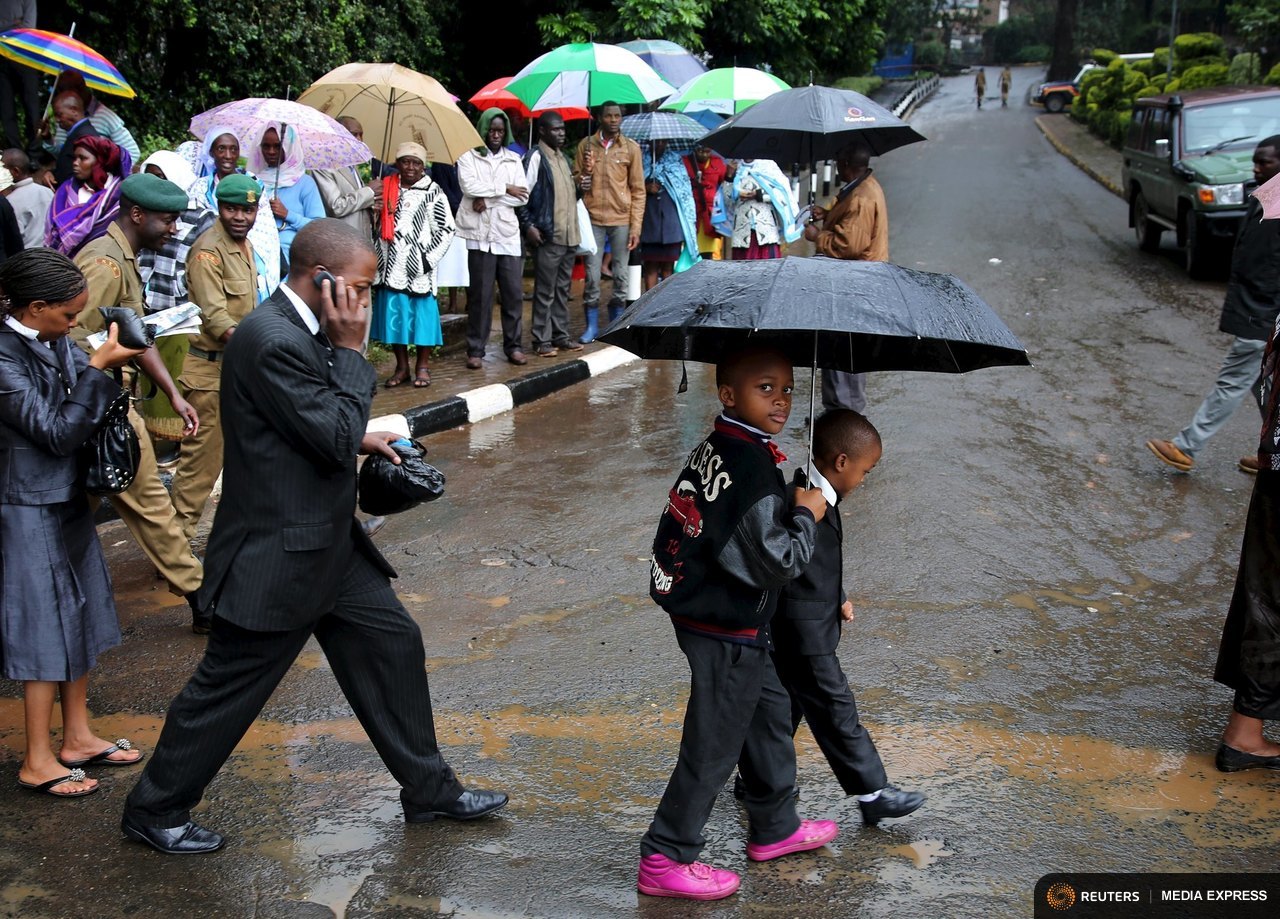 Boys walk in front of their father to attend a mass by Pope Francis in Kenya’s capital Nairobi, November 26, 2015.REUTERS/Goran Tomasevic 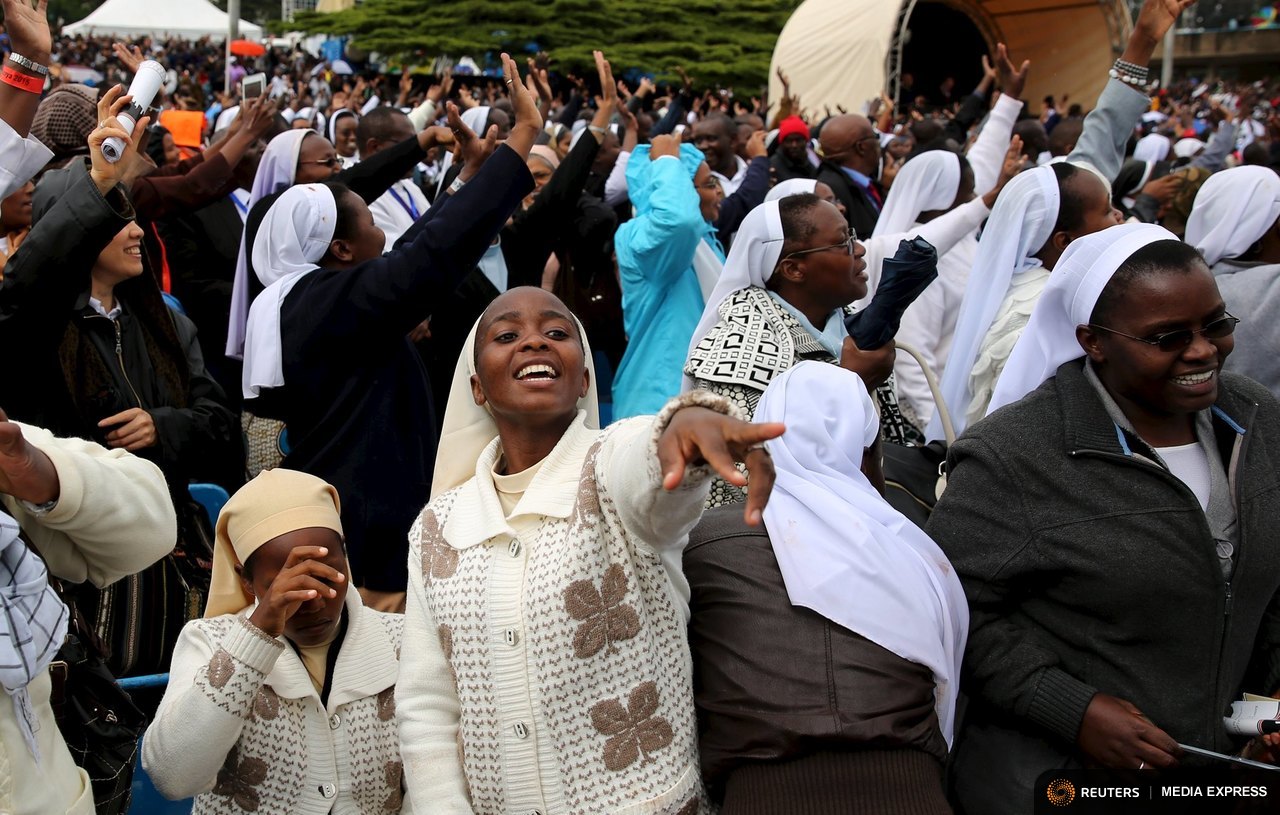 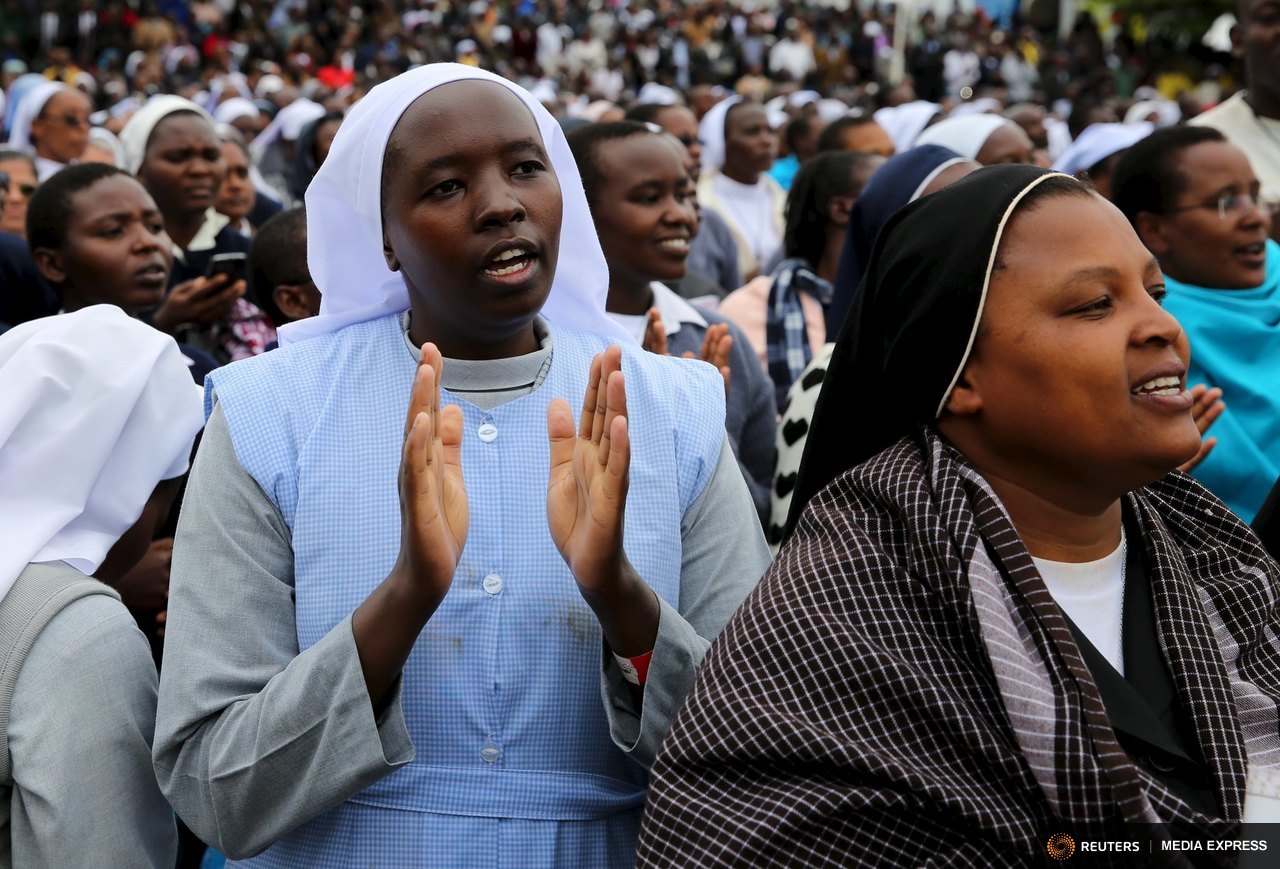 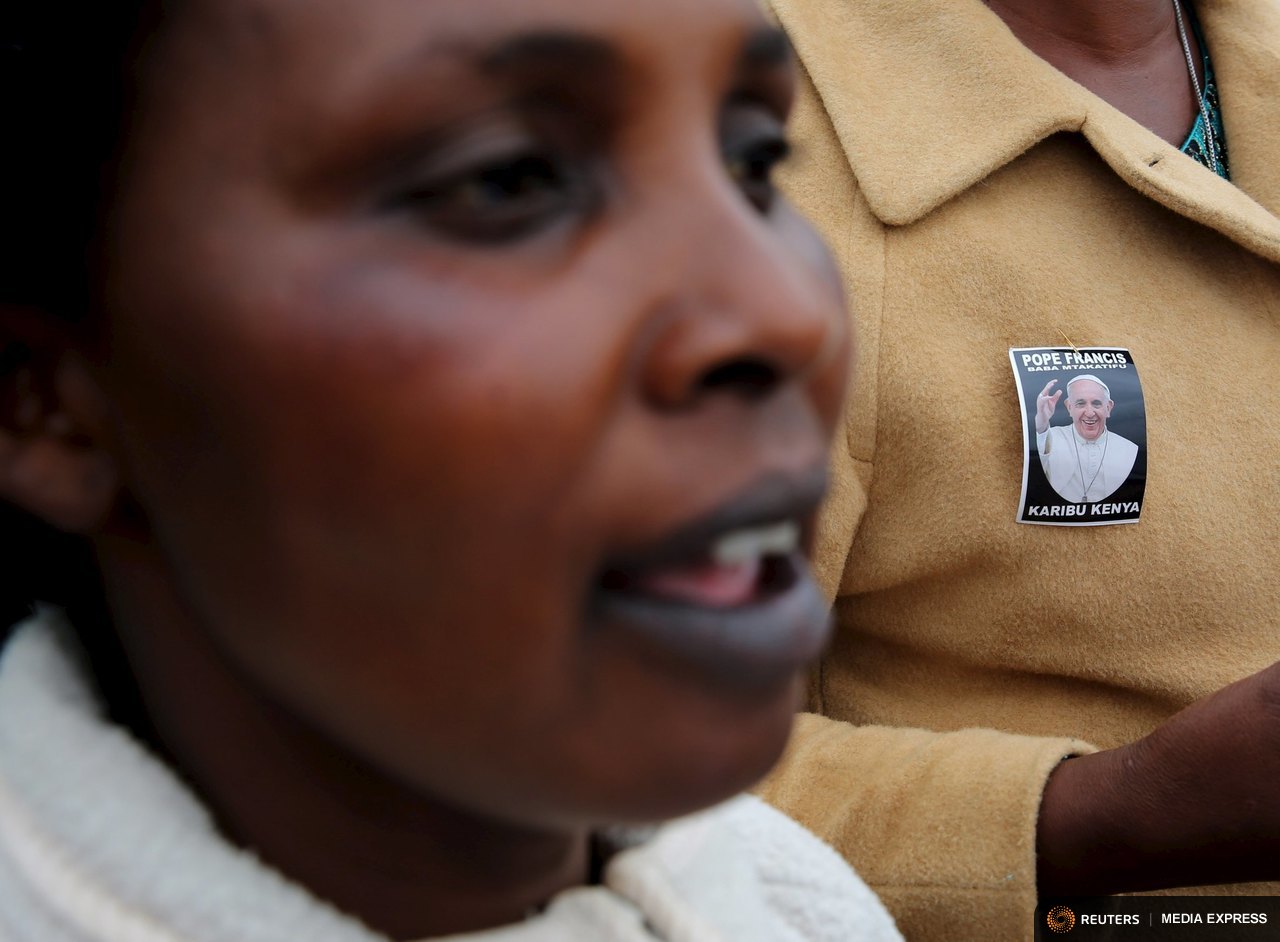 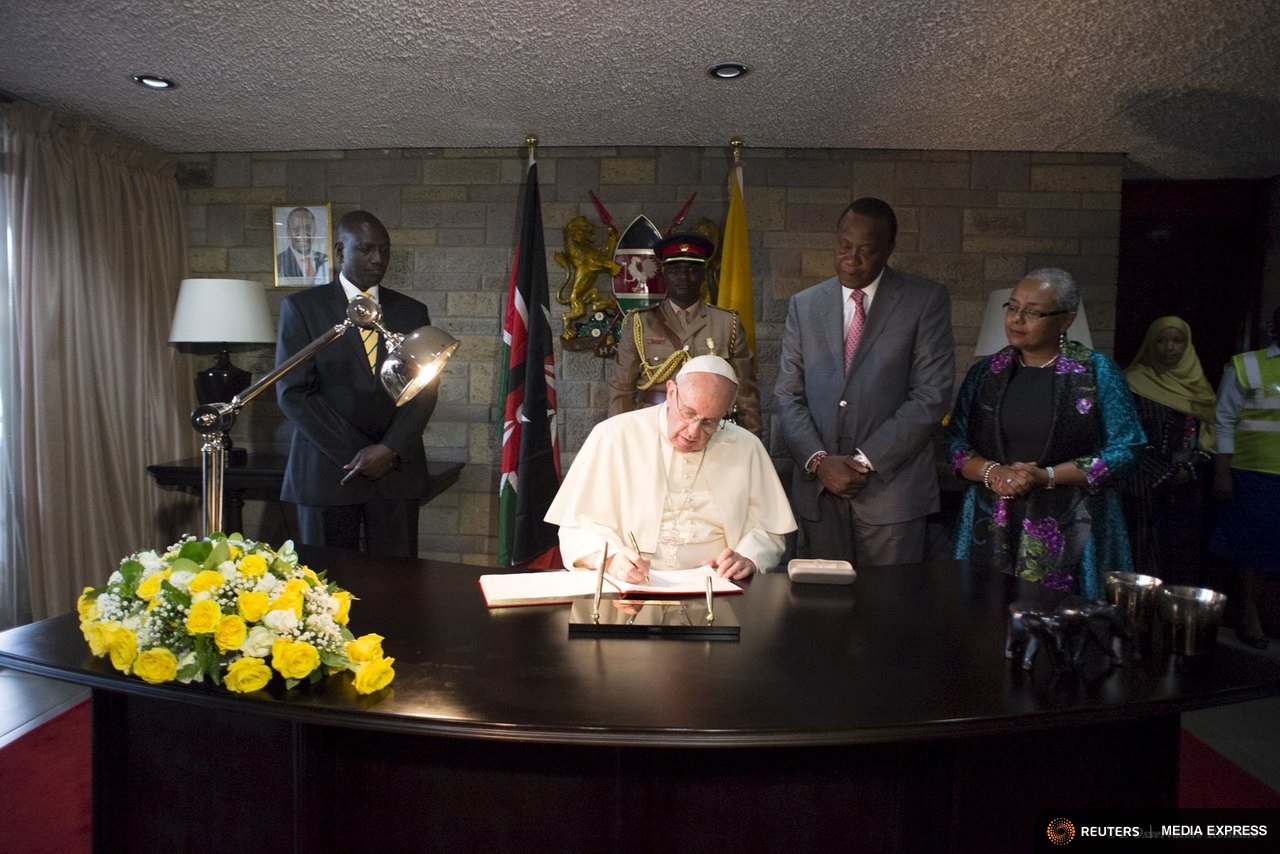 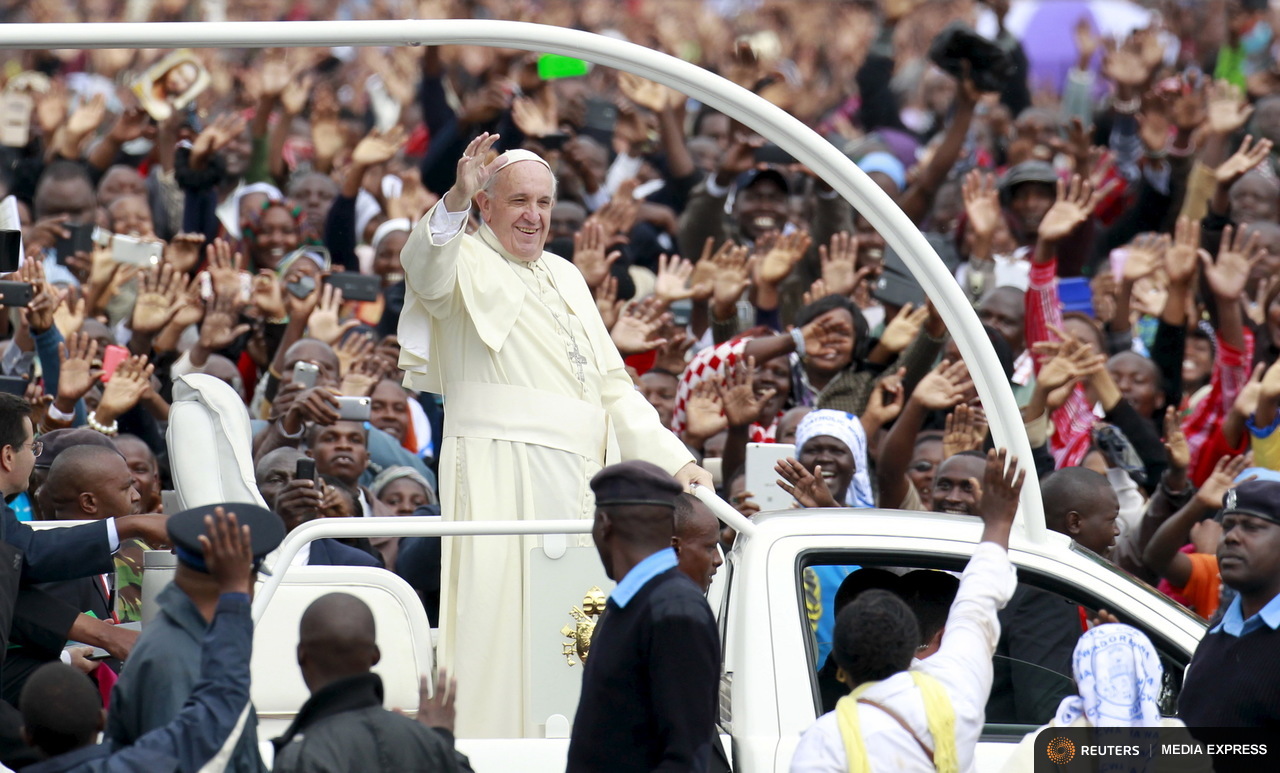 Pope Francis waves to the faithful as he arrives for a Papal mass in Kenya’s capital Nairobi, November 26, 2015. REUTERS/Thomas Mukoya 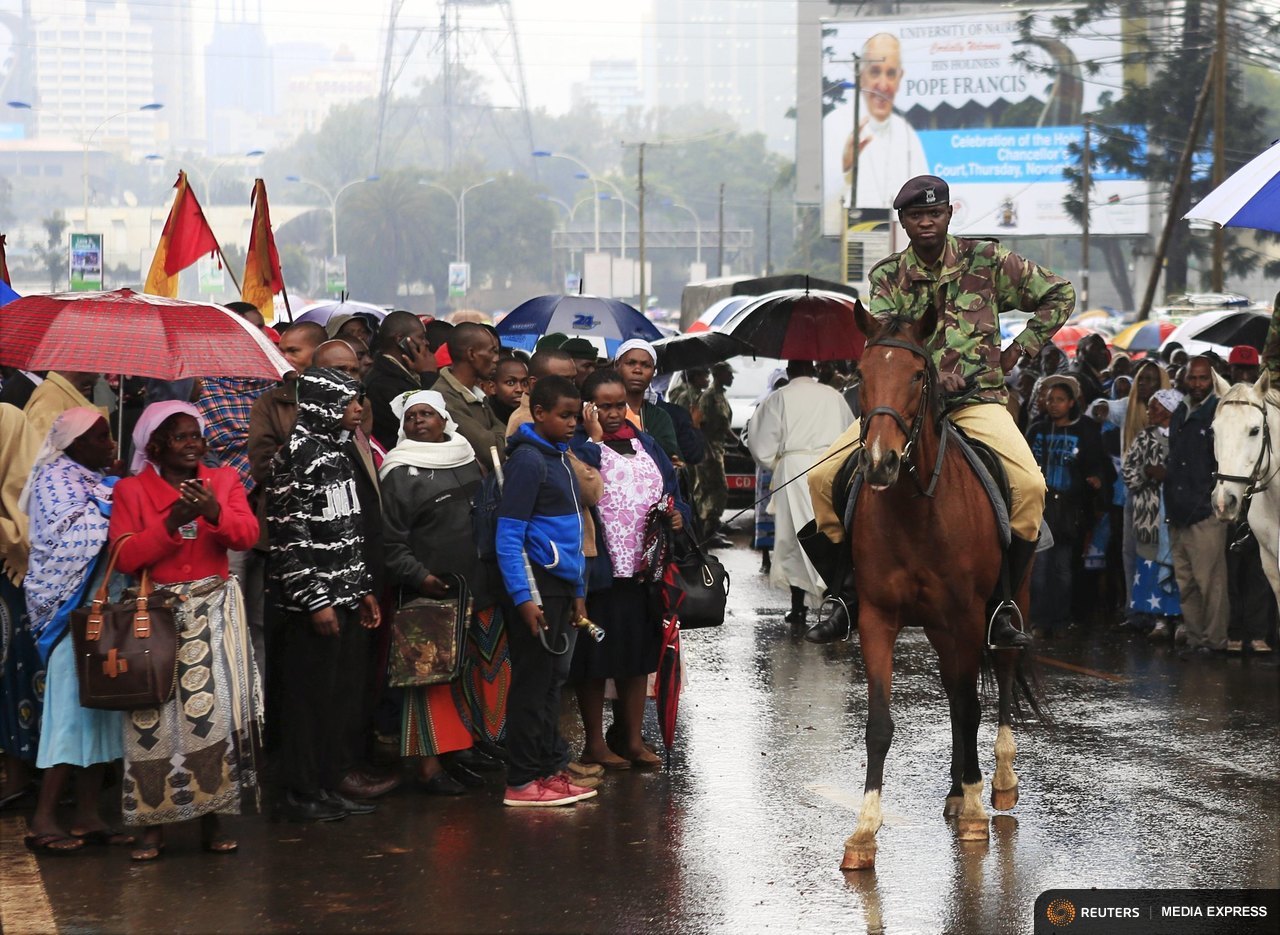 A policeman on horseback keeps watch over members of the Catholic faith waiting to attend a mass led by Pope Francis at the University of Nairobi (UON) in Kenya’s capital Nairobi, November 26, 2015. REUTERS/Noor Khamis 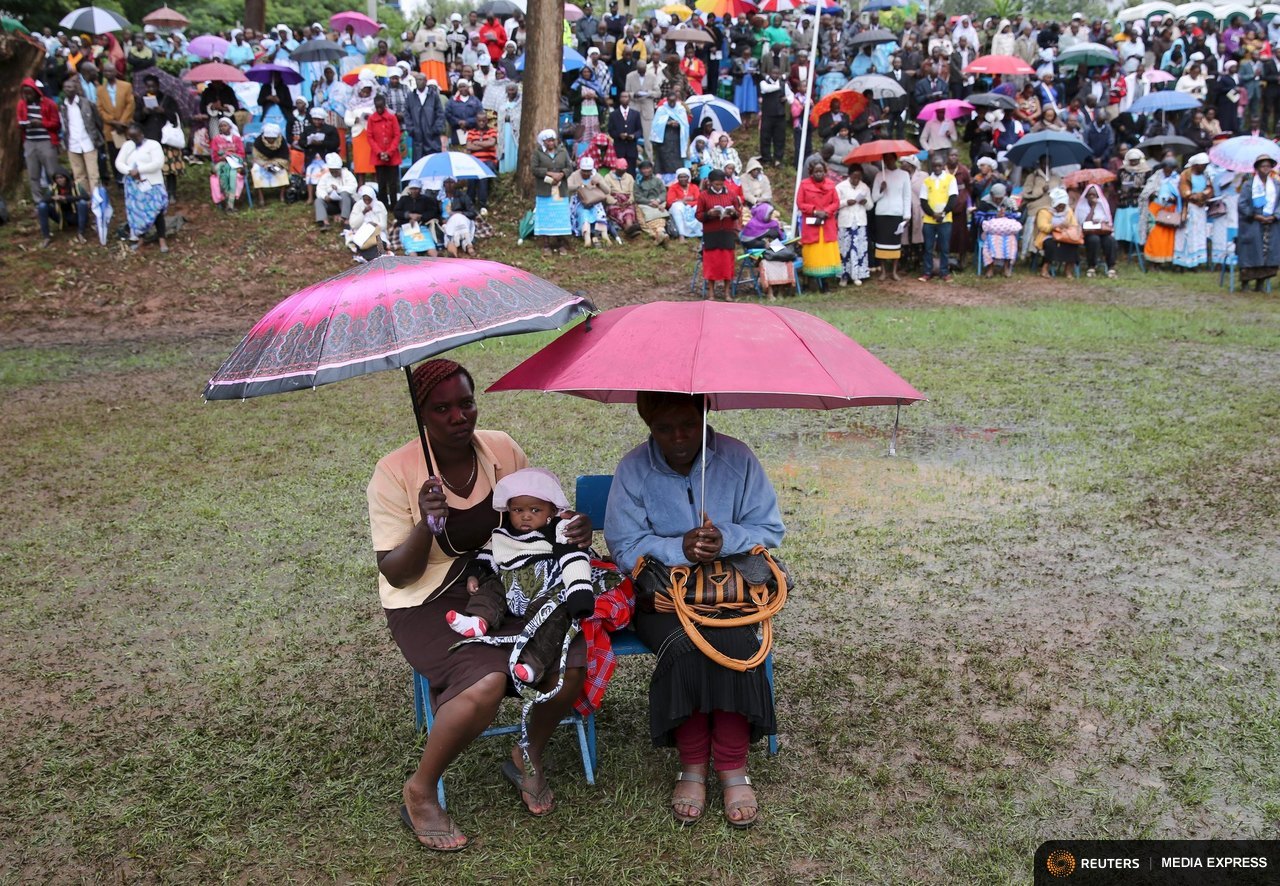 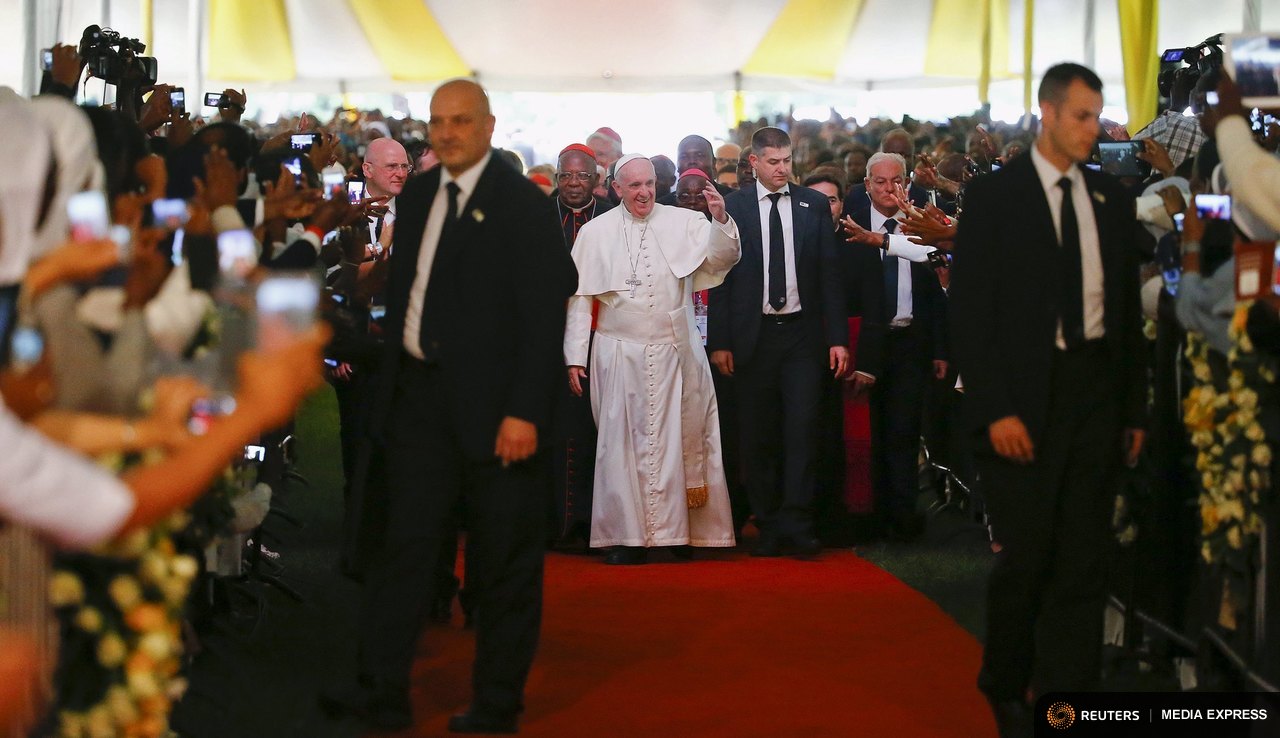 Pope Francis waves as he arrives to attend a meeting with clergy at St Mary’s School in Kenya’s capital Nairobi, November 26, 2015. REUTERS/Stefano Rellandini 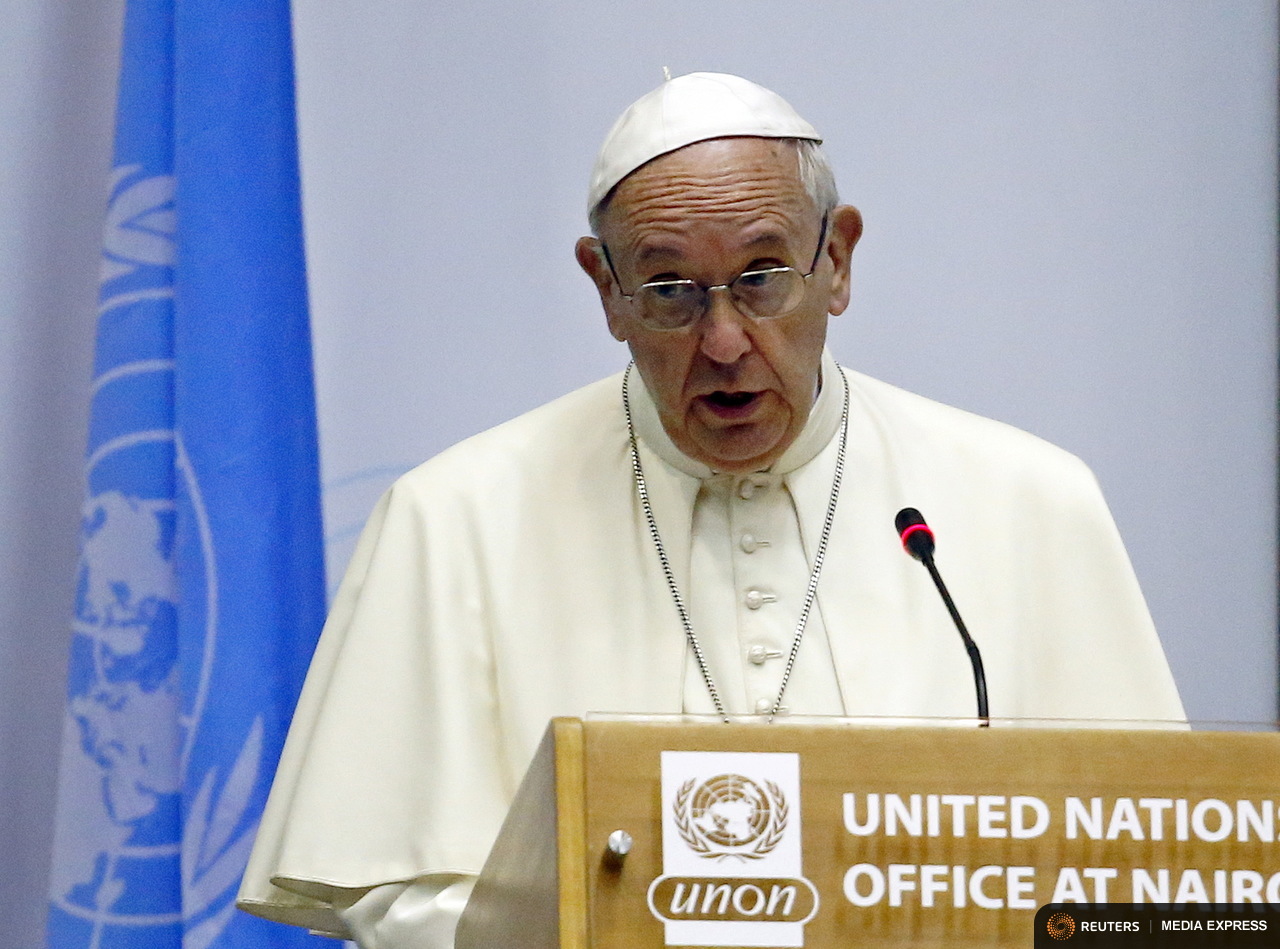