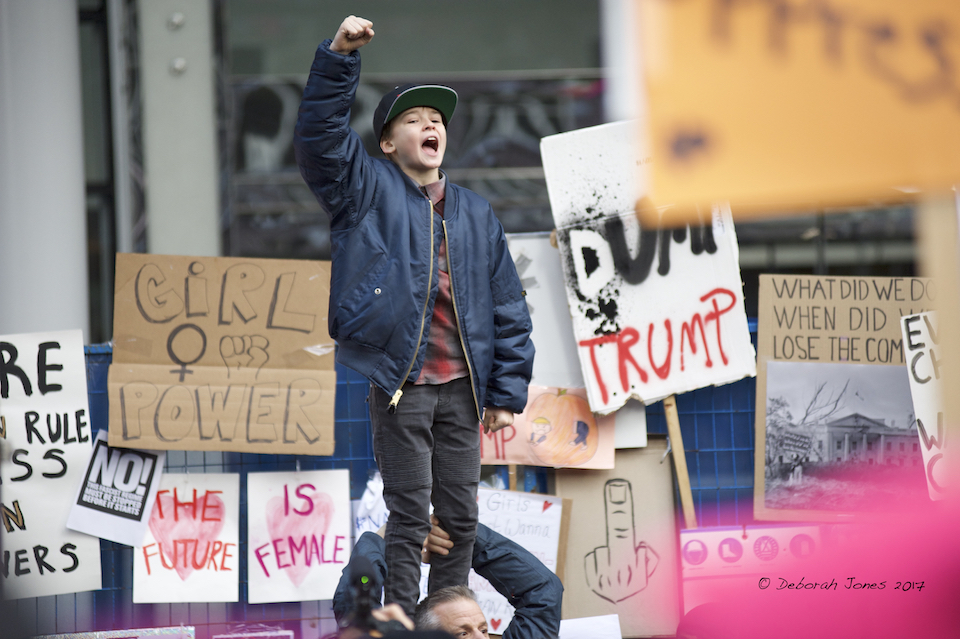 A boy standing on a man’s shoulders outside the Trump Tower, Vancouver, Canada, leads a chant at the Vancouver Women’s March on January 21, 2017, to protest Donald Trump’s inauguration. Photo Deborah Jones © 2017

Insiders acknowledge the cautious strategy could anger progressives whose support helped bring Trudeau to power in 2015 but say for now, he has no choice but to hold fire: Canada sends 75 percent of its exports to the United States and could suffer if it is targeted by Trump.

“Why poke a grizzly bear while it’s having lunch? Trump has just got into office and he is formulating his economic plans,” said one senior political source.

While Trudeau’s close friendship with former President Barack Obama was often referred to as a “bromance” and “dude-plomacy,” Canadian prime ministers have not always had close ties with U.S. presidents.

Still, few in Ottawa have experienced anything like Trump, insiders said. 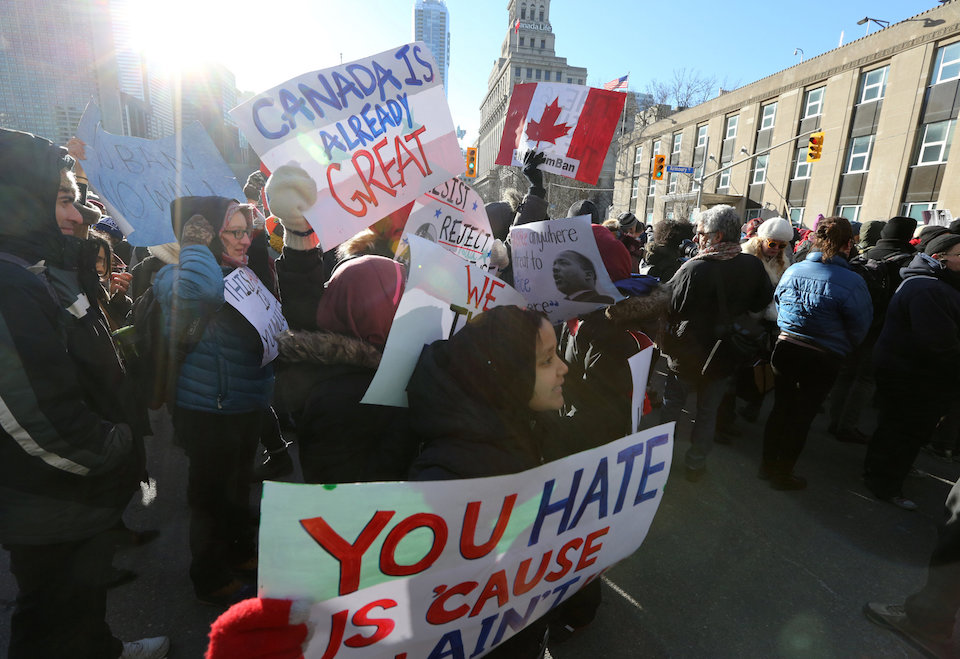 “He is totally unpredictable,” said another government source.

Although Canada regards the United States as its closest ally, Trudeau has yet to visit Washington to see Trump.

A visit tentatively scheduled this week was cancelled after a shooter killed six Muslims in a Quebec mosque and no new date has been set, said two people familiar with the matter.

“He’s been playing it pretty well by restraining the temptation to be publicly critical of the president. At the same time, it’s a delicate balance,” said Kergin, now a senior adviser at law firm Bennett Jones.

Trudeau was also right not to follow British Prime Minister Theresa May in rushing to Washington to “gin up a special relationship,” only to watch Trump make an unpopular move on immigration after she left, Kergin said.

Trump labelled a refugee swap deal with Australia “dumb” on Thursday after a telephone call with Prime Minister Malcolm Turnbull that the Washington Post reported was acrimonious. Turnbull kept any sparring behind closed doors.

Trudeau, however, has taken indirect shots. When Trump signed orders banning people from seven Muslim-majority states, Trudeau tweeted that Canada was open to those fleeing war.

His chief spokeswoman blasted U.S. network Fox News on Tuesday for a tweet falsely claiming the Quebec gunman was of Moroccan origin. But she said nothing publicly when Trump’s spokesman said the attack on Muslims showed why it was important to suspend immigration from Muslim nations.

This approach infuriates the opposition New Democrats, who have called on Trudeau to denounce Trump’s “racist” immigration policy.

Trudeau team members acknowledge that over time, Liberals could lose support before a 2019 election if the prime minister is deemed not to be standing up for Canadian values such as inclusiveness.

“That is a risk, but we’ll address it closer to the time,” said the first Ottawa insider.

Surveys show the Liberals have a healthy, but narrowing, advantage over their nearest rivals.

Pollster Nik Nanos of Nanos Research said it was too early for Trudeau to be aggressive.

“He has to avoid making any kind of criticism. Trump has a very thin skin and he’s quick to lash out,” he said.