Coordinated bombings in Brussels may have been in the works for some time, aided by an underworld where crime and extremism blur together. 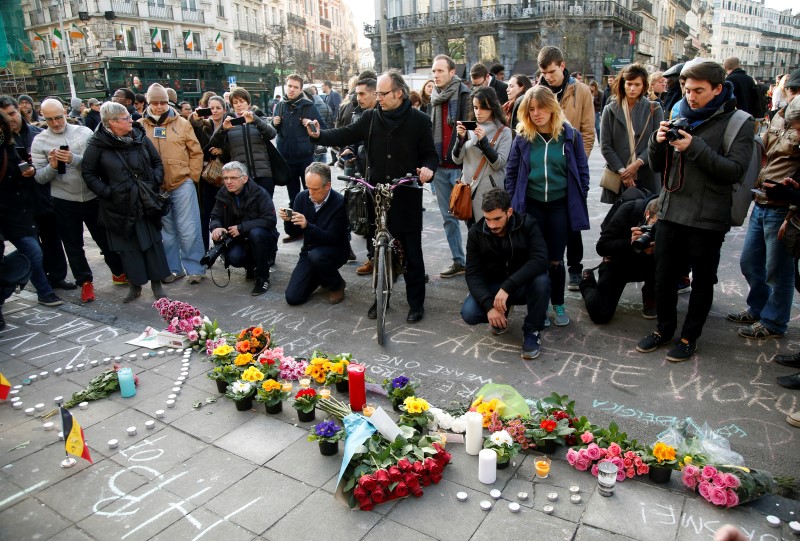 Over the past several months, Belgian counterterror officials told me they were working nonstop to prevent an attack and that the danger had never been so high. Today, their worst fears came true when coordinated bombings struck the airport and a subway stop in Brussels.

As part of my work on a forthcoming ProPublica/Frontline documentary about the terrorism threat in Europe, I traveled recently to Belgium to investigate the nation’s central role as a staging ground for the Paris attacks four months ago. 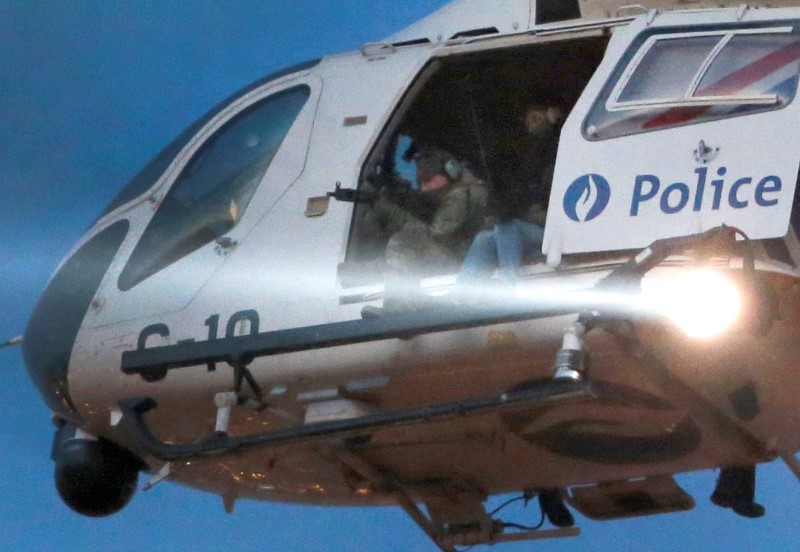 “It is just a matter of time before terrorists will succeed in attacking Belgium,” federal prosecutor Eric Van der Sypt told me weeks ago in Brussels.

The concerns of Van der Sypt and other officials were driven by events as well as surveillance of suspects in Belgium and Syria. In December, Belgian police prevented two alleged plots, one by the remnants of the Belgian-led group that hit Paris in November and another by a radicalized motorcycle gang, the Kamikaze Riders. In the ensuing months police pursued fugitives linked to the Paris attacks and intercepted menacing phone chatter and WhatsApp chats filled with photos of jihadis posing with guns, camels and corpses in Islamic State’s dominions in Syria.

In one intercepted phone call to Brussels, a Belgian militant in Syria discussed his friend Bilal Hadfi, a Belgian suicide bomber who died in Paris in November, according to counterterror officials. The militant’s mother warned him not to do bad things like his friend Bilal or she would pray for him to go to hell. The militant asked what the friends were saying about Bilal back in the “sector,” the tough Molenbeek suburb of Brussels where many of the Paris attackers grew up.

“Are they talking about him? Are they praising him? Are they saying he was a lion?” the militant said. “For them, the jihad is all about recognition on the street, in the neighborhood, the glory,” a counterterror official told me.

The Islamic State claimed responsibility for the Brussels attacks. Investigators are trying to determine whether the perpetrators were part of the group of Belgians who provided support for the Paris plot. At least two suspected Paris plotters had remained on the run after the arrests Friday of Abdeslam and another suspect.

“We think there was a bomb maker who survived, someone who had put together the vests in Belgium, and we don’t think it was one of those who died in Paris,” a senior French counterterror official told me before the Brussels attacks. “Usually they don’t want to lose someone with those kinds of skills in an attack.” 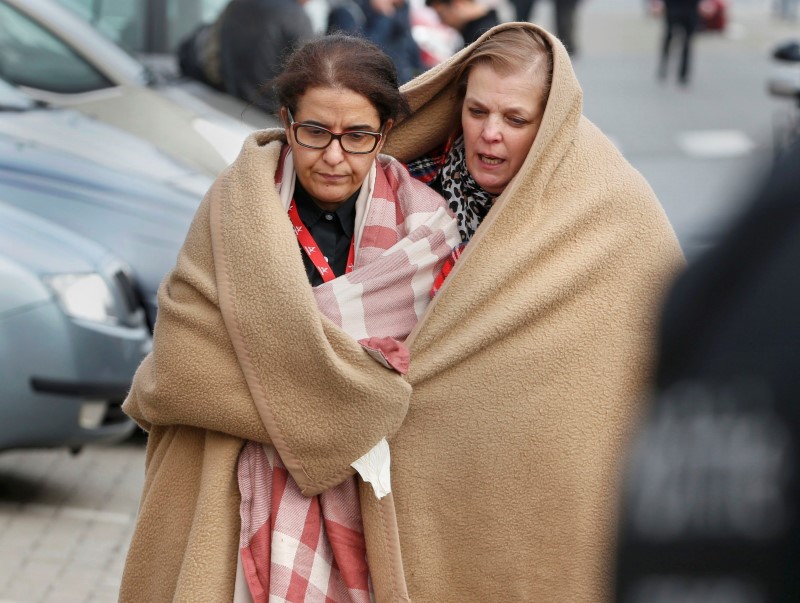 It is also possible a separate cell carried out the attack in Brussels. A Belgian counterterror official cited intelligence reports that 180 European operatives were trained by the Islamic State and deployed back to their home countries during the past year. Some of those operatives, including at least three of the Paris attackers, used fraudulent passports to pose as Syrians and concealed themselves in the chaotic flow of refugees and migrants across the European Union’s borders.

Officials describe the threat in Belgium as concentric circles: Hundreds of hard-core terrorists intent on striking Europe after express training by the Islamic State in what a captured French suspect described to interrogators last year as a “factory of terrorists” in Syria. Extremists willing to fight and die without leaving home. Gangsters who drink and gamble, yet support the Islamist cause with guns, cash, cars and documents. And loose networks of petty criminals and associates willing to shelter notorious fugitives like Salah Abdeslam, the suspected Paris attacker arrested last week in his native Molenbeek.

The size, volatility and street gang-like mentality of that underworld help explain how Abdeslam dodged authorities for four months – and how bombers eluded security forces on high alert and struck the Brussels airport and a subway stop near the European Union headquarters today. The estimated casualty count so far: more than 30 dead and 230 wounded. The convergence of crime and extremism in has reached dangerous levels in Belgium but reflects a larger European security challenge. 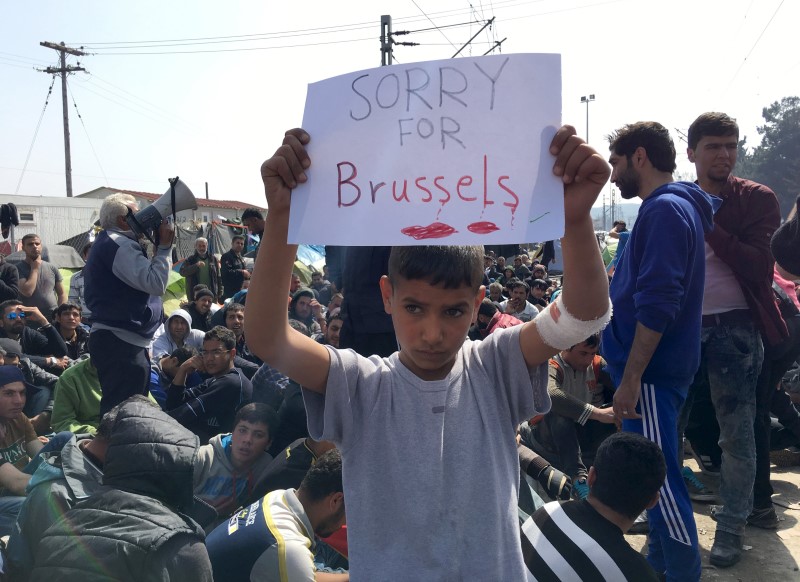 A refugee boy holds up a placard reading “Sorry for Brussels” as refugees and migrants take part in a protest against the closure of the border at the Greek-Macedonian border March 22, 2016, near the Greek village of Idomeni. REUTERS/Fedja Grulovic

“You have so many people who are adrift, who are involved in common crime and decide terrorism is a shortcut to paradise,” said Dolores Delgado, a chief counterterror prosecutor in Spain. “It gives them a chance to get revenge on society. It is a virtual army of people who follow a demented ideology whether they go to Syria or remain here. A large number of people who are ready to help an attack.”

France and Belgium are the top targets because they have sent so many fighters to Syria, where they train with thousands of French-speaking jihadis from Tunisia and Morocco. The Belgian counterterror official said: “When the recruits arrive in Syria, they are asked, ‘Do you want to fight here or go back home to Europe to be a martyr?’ If they want to go back to Europe, they are given express training, a week of arms and explosives, then sent back. It’s as quick as possible.”

The coordinated attacks on the airport and the subway appear to have been in the making for some time, officials said Tuesday. The timing, however, may have been driven by fears that the arrests last week would expose other militants operating underground in Belgium, especially if Abdeslam and the other suspect cooperated with investigators.

“I don’t think the attack was organized quickly as revenge for (Abdeslam’s) arrest,” said Delgado, the Spanish prosecutor. “The alert has been at a high level ever since the Paris attacks. It could be that they sped up a plot because they thought Abdeslam might collaborate. But their overall goal is to spread terror and chaos.”

The fugitive Paris suspects and Tuesday’s bombers benefited from the support of an underworld where crime and extremism increasingly blur together, making the threat even harder to identify. The phenomenon exists also in France, Denmark and other nations with sizeable populations of working-class, alienated children and grandchildren of Muslim immigrants. But it has reached dangerous extremes in Belgium. An increasing number of recruits and supporters of the Islamic State are violent criminals who radicalize rapidly, yet don’t necessarily adhere to a fundamentalist lifestyle. 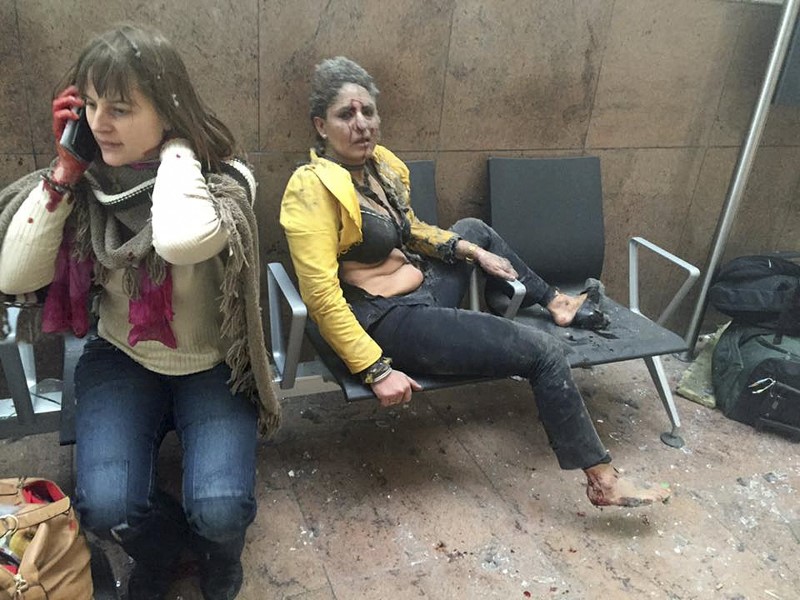 Injured people are seen at the scene of explosions at Zaventem airport near Brussels, Belgium, March 22, 2016. REUTERS/Ketevan Kardava/Courtesy of 1tv.ge/Handout via Reuters

The Kamikaze Riders are a prime example. Their profile is rare in the world of Islamic extremists: a motorcycle gang with all the trappings of that subculture, yet radicalized and was implicated in a plot for an attack in December.

In Belgium, gangsters often provide crucial support to terrorist operations without even bothering to maintain a veneer of piety. Police describe robberies of fast food stores and drug dealers that, after further investigation, turn out to be done to finance trips to join the jihad in Syria. Even supposed hardcore Islamists break the rules: In calls caught on a wiretap, investigators listened to a veteran Brussels extremist scold his daughter for wearing a short skirt, then borrow money from friends and arrange for the services of a transvestite prostitute, officials said.

Referring to some of the Paris plotters, a Belgian counterterror official said:“These guys are not stereotypical Islamists. They gamble, drink, do drugs. They are lady killers, wear Armani, fashionable haircuts. And they live off crime.”

Petty criminals, friends and relatives, mostly of Moroccan descent, helped the clean-cut Abdeslam live underground in the capital despite an aggressive dragnet. They were motivated by family and friendship ties and a deep-seated hostility toward mainstream society that often doesn’t have much to do with religion.

“When you do a raid on a house, in normal areas people talk or help if they think someone was a terrorist,” Van der Sypt said. “People are not collaborating in Molenbeek. They are throwing stones at the police. It has created a community of people who don’t go to school anymore when they are 11 or 12. They are very good criminals as teenagers. They become kingpins at 18.”

Once again after Tuesday’s attack, Belgian police were kicking down doors in search of fugitives suspected in the airport bombing. At least one fugitive was said to be on the run, and police found bomb-making equipment and an Islamic State flag during a search.

“We have to develop a new mentality because the profiles have changed so much,” Delgado said. “Immediately people start talking about bombing Syria, about war overseas. But the terrorists live in the West.”

Sebastian Rotella is a senior reporter at ProPublica. An award-winning foreign correspondent and investigative reporter, his coverage includes terrorism, war crimes and immigration.  Go to ProPublica to read more of Sebastian Rotella’s reporting on the rise of terrorism in the European Union.   Sign up for ProPublica’s daily newsletter.