BRUSSELS (Reuters) – Europe is torn between upholding its values and pursuing its interests in the multiple crises over refugees, challenges to the rule of law, relations with Russia and Turkey, and Britain’s membership that are shaking the European Union.

Political and economic interests are mostly prevailing over the EU’s declared values and governance standards, but it is not clear that the outcomes are any more effective. 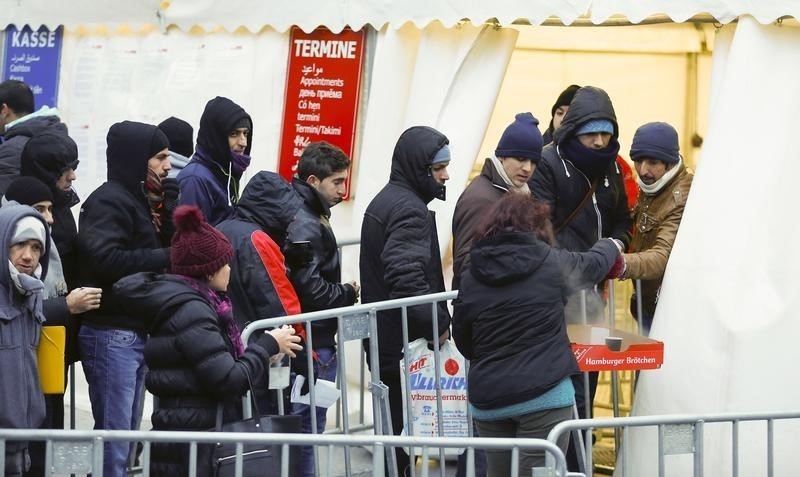 Migrants queue to enter a tent that serves as a waiting room at the the Berlin Office of Health and Social Affairs (LAGESO), in Berlin, Germany, January 5, 2016. REUTERS/Hannibal Hanschke

To critics including human rights campaigners, Europe is too willing to betray its principles. To supporters, it is “growing up” and acting less naively.

“Politics is the art of the possible, but this is very different from the conception of Europe promoted for the last half century,” said Michael Leigh, senior adviser at the German Marshall Fund think-tank on transatlantic relations and a former senior European Commission official.

After more than a million migrants flooded into Europe last year, EU governments are divided on whether the bloc should give priority to its commitment to give asylum to refugees, or whether the main aim should be to toughen border controls and pay other countries to keep potential asylum-seekers at bay.

German Chancellor Angela Merkel is under fire at home and in Europe for having taken the moral high ground by welcoming hundreds of thousands of refugees.

The sullen reluctance of most of the EU – not just central European states but core partners like France – to take in quotas of refugees to which they agreed months ago is driven by fear of a domestic political backlash.

Brussels faced another of those values-versus-interests dilemmas last week when the executive European Commission had to decide whether to launch disciplinary action over Polish laws shackling the constitutional court and the state media.

The EU was widely criticised for failing to act to uphold its values of democracy and the rule of law when Hungarian Prime Minister Viktor Orban launched a similar crackdown in 2010 on the judiciary, the media and civil society organisations.

The Commission did take a first step on Poland but stressed it wanted to resolve the issue in dialogue with Warsaw and there was no likelihood of moving to sanctions such as suspending the country’s EU voting rights or access to funds.

Within the EU executive, officials are reluctant to appear to be lecturing a democratically elected Polish government as it goes about implementing campaign promises.

After big demonstrations in Warsaw in defence of liberal values, many in Brussels are pinning their hopes on the self-correcting strength of Polish democracy. Others are looking for someone else to take the lead such as the Council of Europe’s Venice Commission, a pan-European constitutional watchdog.

Major EU members Germany and Britain have mostly kept quiet about Poland on pragmatic grounds. Berlin wants to preserve as cooperative a relationship as possible with the more nationalist government of Jaroslaw Kaczynski’s Law and Justice party.

London needs Polish goodwill as it renegotiates sensitive aspects of its own EU membership. Eager to curb the access of EU migrants – mostly Poles – to in-work welfare benefits to deter further mass immigration to Britain, it is the last country likely to criticise Warsaw over civil rights.

Indeed, Europe’s willingness to seek a formula to permit Britain to deny fellow EU citizens who enter its labour market the same benefits as its own nationals highlights a willingness to compromise on core values for the sake of expediency – in this case to try to ensure Britons vote to remain in the EU in a forthcoming referendum.

While the European Parliament, which sees itself as Europe’s conscience on human rights, is likely to criticise Poland in a special debate this week which itself is a form of political punishment, other EU bodies are cautious.

“With the migration crisis and … with Europe’s current fragility, it would be a big mistake to lose Poland,” a senior European Commission official said.

While the bloc did agree under German leadership to impose sectoral sanctions that have pushed the Russian economy into recession and restricted its access to capital, there are charges of double standards when it comes to energy.

Italy, Bulgaria and others that lost out on South Stream accuse Berlin of hypocrisy, while Poland and Baltic states say doubling Nord Stream would negate EU support for Ukraine.

Germany is trying to sidestep the arguments about values and pointing to Moscow’s historic role as a reliable supplier.

With Turkey, the EU is drawing a veil over its criticism of deteriorating civil liberties, media freedom and judicial independence in a candidate country for the sake of its vital interest in stemming the refugee flow to Europe.

The European Commission delayed a critical report on Turkish compliance with EU standards until after parliamentary elections in November to avoid upsetting President Tayyip Erdogan.

EU officials acknowledge they have muted criticism of Ankara because they are desperate for Turkish help on the refugees.

Across north Africa, the EU is downplaying the human rights and good governance elements of its policy towards neighbours such as Egypt, Morocco and Algeria – a stumbling block to dealing with authoritarian rulers – due to Europe’s need for security cooperation against Islamist militants.

“We are not abandoning our values but we are perhaps being more pragmatic,” said an EU official involved in managing those relationships, speaking on condition of anonymity.