Siege of Kobane a battle for a stable Middle East 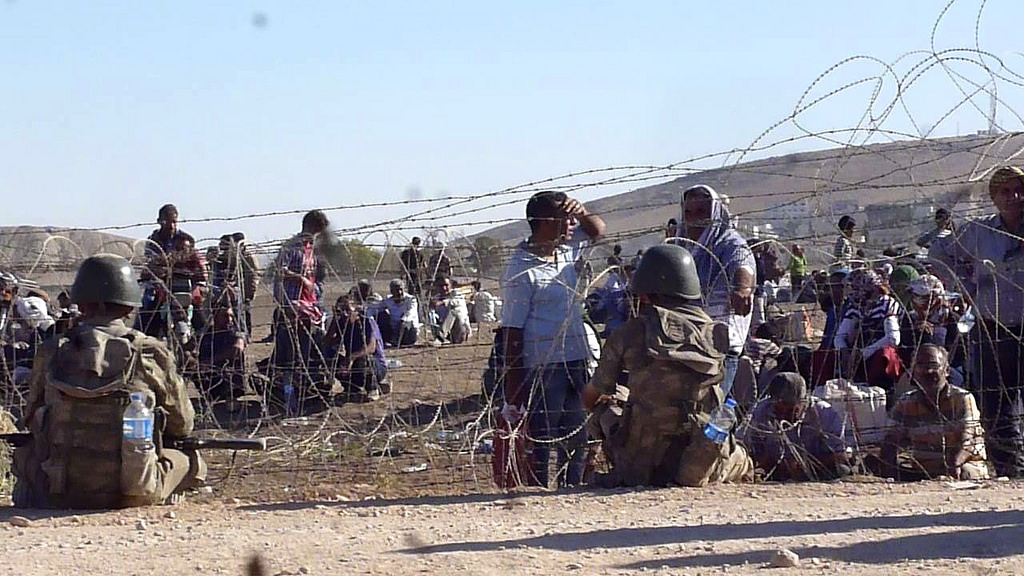 Above, Turkish soldiers and paramilitary guard the border with Syria in September as Kurds seek refuge from Islamic State fighters. Photo by Heike Hänsel via Flickr, Creative Commons

The battle against the Islamic State fighters draws in viewers across the world, there has been some attention given to the men and women resisting them in northern Syria. The Syrian part of Kurdistan, or Rojava, as the Kurds would like to call it, has been fighting Islamists for well over two years now but only recently has the battle for the border town of Kobane bought them to light.

And while it’s easy to portray the Kurdish people as pitted against this new terrorist threat, they are actually involved in something far more profound. Kobane is symbolic and the conflict there carries a universal significance. Not only are the Kurds battling the Islamists, but they are also attempting to create a model of democracy that might actually bring stability to a war-torn region.

The Kurdish political vision is not founded on any particular racial, ethnic, regional or religious belief but rather on an idea, or a set of ideas, that should resonate with people everywhere.

Fighters in Kobane claim to be standing up for the freedom of everyone in the region, be they Kurds, Turks, Arabs or anyone else. The way the fighters in Kobane have challenged stereotypical gender roles is just one example.

As far as religious difference goes, Kobane disproves both Islamophobes who believe the Middle East to be incapable of progress and politically correct Islamophiles who push the patronizing idea that religious identity is a top priority for Muslims the world over. In their readiness to defend the Yazidi minority against persecution from IS, the Kurds have essentially been promoting a radical secularism and a vision of tolerance in a region torn by religious strife.

What is novel about the Kurdish struggle for self-determination is its very definition of self-determination. The concept, when applied to nations, is generally taken to mean the right of nations to secede and form states of their own, but the Kurds see it differently. Many believe an experiment in democratic confederalism is what the region really needs.

This is an idea espoused by PKK founder Abdullah Ocalan, who is a central intellectual and moral figure for Kurds. The PKK, or the Kurdistan Workers’ Party, has been fighting Turkey for greater autonomy since 1978 and has also trained Kurdish fighters in Kobane. Ocalan’s writing, compiled from within the confines of a Turkish prison where he has languished for about 15 years, has provided a solid ideological plank for the Kurdish struggle. He believes nation states are inherently oppressive. While oppressed groups might have a legitimate desire to form states of their own, even such newly formed states only serve to replace one form of domination with another. For him, the nation state is linked to xenophobic nationalism, sexism and religious fundamentalism.

Democratic confederalism is a system of governance that would be based on greater collective consensus and voluntary participation. Ecology and feminism are seen as central pillars for local self-governance. It calls for an economic system that should be based neither on exploiting human labour nor the unsound use of natural resources.

Kobane has essentially implemented this theory in practice. The ideas might seem utopian and realists may, quite legitimately, question the sustainability of autonomous communes that do not have the political or military backing of a centralised state. But as Oscar Wilde said, progress is the realisation of Utopia. Maybe Kobane’s progress is just that.

The struggle for Kobane is an event of global significance on a par with the Declaration of Independence, the Storming of the Bastille, the Paris Commune, or the Vietnamese victory at Dien Bien Phu. Success for the Kurds would challenge established intellectual, ethical and political horizons.

At a time when right-wing parties are growing in Europe and elsewhere, and minority fundamentalism is growing in parallel, the Kurds are offering something different and it should not be ignored. In that sense, they are fighting for everyone.

Karthick Manoharan is a PhD student and graduate teaching assistant in politics at University of Essex, England. He does not work for, consult to, own shares in or receive funding from any company or organization that would benefit from this article, and has no relevant affiliations.

This article was originally published on The Conversation.

Before going to war it is always a good idea to have a clear purpose and outcome in mind.  Yet six Royal Canadian Airforce CF-18s are set for bombing missions in the Middle East without any clear vision of what victory will look like. The whole thing is depressingly reminiscent of the Libyan campaign in 2011 when allied warplanes enabled rebels to oust and kill dictator Moammar Gaddhafi. But then they all declared “mission accomplished,” packed up their kit and headed home. Meanwhile Libya has turned into bloody chaos and a killing ground for rival Islamic factions, tribal fighters and would-be new dictators. There are many days when Gaddhafi, for all his evil, looks a lot better than what Libyans have got now. … read more (paywall)

In 1918, the Yazidis of Sinjar mountain received an ultimatum from Ottoman forces – to hand over their weaponry and the Christian refugees they were sheltering, or face the consequences. They tore it up and sent the messengers back naked. The Sinjaris are the “Highlanders” of the Iraqi Yazidis – tough and proud. After suffering terrible casualties and appealing to the allied forces for help they were able to survive the subsequent attack and live out the war in their mountain homeland. … read more

Facts and Opinions is an online journal of select and first-rate reporting and analysis, in words and images: a boutique of slow journalism, without borders. Independent, non-partisan and employee-owned, F&O performs journalism for citizens, funded entirely by readers. We do not carry advertising or solicit donations from foundations or causes. We appreciate and rely on your support: a day pass is $1 and subscriptions start at $2.95 per month.