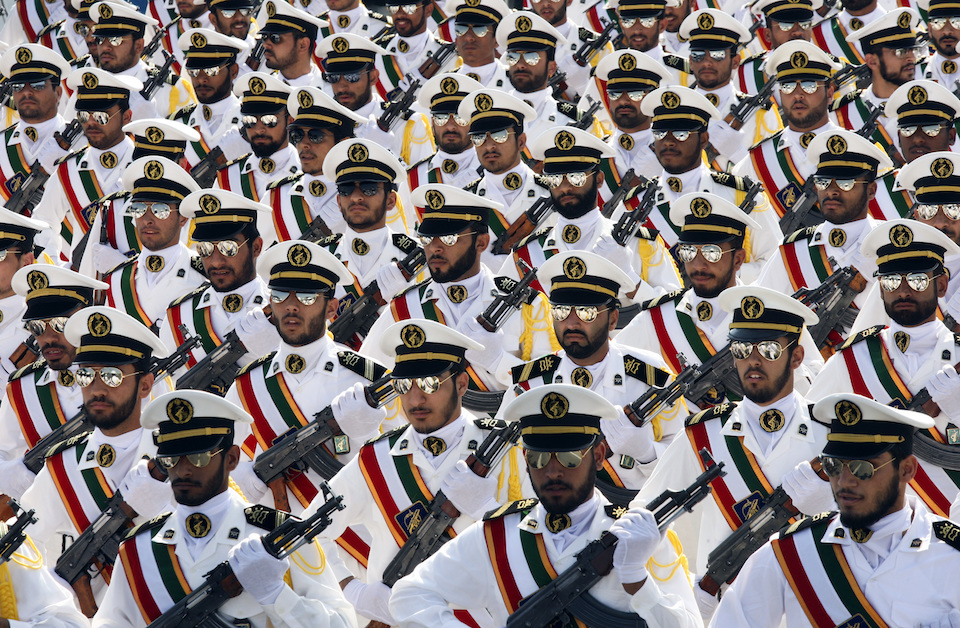 Members of the Iranian Revolutionary Guard Navy march during a parade to commemorate the anniversary of the Iran-Iraq war (1980-88), in Tehran September 22, 2011. REUTERS/Stringer 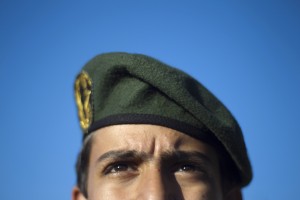 A member of Iran’s Revolutionary guard stands at attention during an anti-U.S. ceremony in Azadi (freedom) Square in Tehran April 25, 2010. REUTERS/Morteza Nikoubazl

Now the country is expecting an economic boom in the post-sanctions era and the Iranian Revolutionary Guards Corps (IRGC), will be a beneficiary. Likewise, the leadership will ensure it is well funded to continue the effort in the regional crisis, including the Syrian civil war.

The Guards aren’t entirely off the hook, even though the United States, European Union and United Nations lifted most sanctions on Saturday under a deal with world powers where Tehran agreed to curbs on its nuclear programme.

Washington has noted that “U.S. statutory sanctions focused on Iran’s support for terrorism, human rights abuses, and missile activities will remain in effect”, and these will be enforced against certain members and actions of the Guards.

But the Guards have long proved successful in defending their economic interests, including in recent years when the sanctions were at their tightest, effectively excluding Iran from the global financial and trading system.

“Even under very difficult economic circumstances, the funds for the IRGC’s activities, whether domestic or overseas, remained intact,” said a former official close to the government of pragmatist President Hassan Rouhani.

Created by the Islamic Republic’s founder Ayatollah Ruhollah Khomeini, the Guards first secured an economic foothold after the Iran-Iraq war of the 1980s when the clerical rulers allowed them to invest in leading Iranian industries. 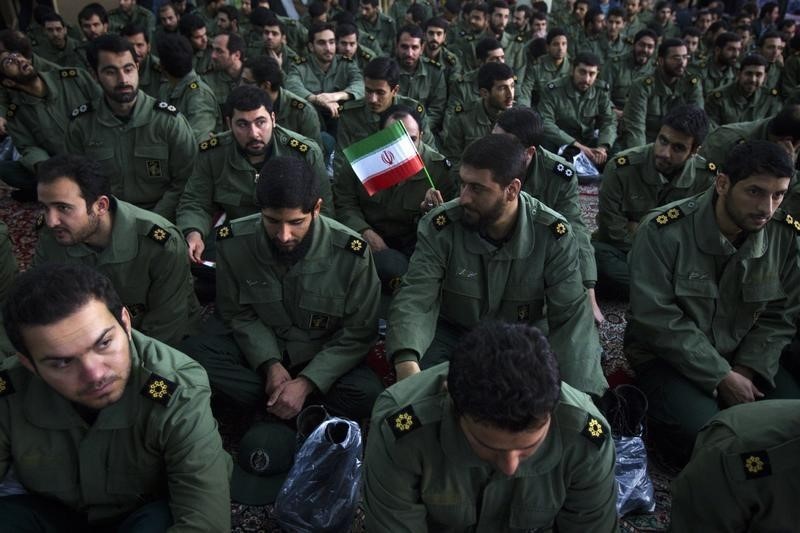 Members of the revolutionary guard attend the anniversary ceremony of Iran’s Islamic Revolution at the Khomeini shrine in the Behesht Zahra cemetery, south of Tehran, February 1, 2012. REUTERS/Raheb Homavandi

Iran – the dominant Shi’ite Muslim power which is in rivalry with Saudi Arabia and the United States’ other Sunni Arab friends – has fought decades of sectarian proxy wars in Syria, Lebanon, Iraq and Yemen.

Tehran is not about to end these activities just because its relations with the West have thawed with the nuclear deal. On the contrary, it hopes the economy, freed from the sanctions, will create new wealth that can be used for these ends.

One senior security official signalled financing would grow for the Guards and its overseas arm, the Qods force.

“The IRGC and the Qods Force are Iran’s key assets in the region, where we are determined to back our allies and those oppressed nations,” said the official. “All parts of the establishment have reached a consensus on this. If you are a rich person, you can help your friends more, right?”

Iran has already spent billions of dollars propping up Assad and in recent months provided elite teams to gather intelligence and train Syrian forces. Its casualties are rising, with several commanders killed, and foreign experts believe Tehran may have as many as 3,000 troops there. 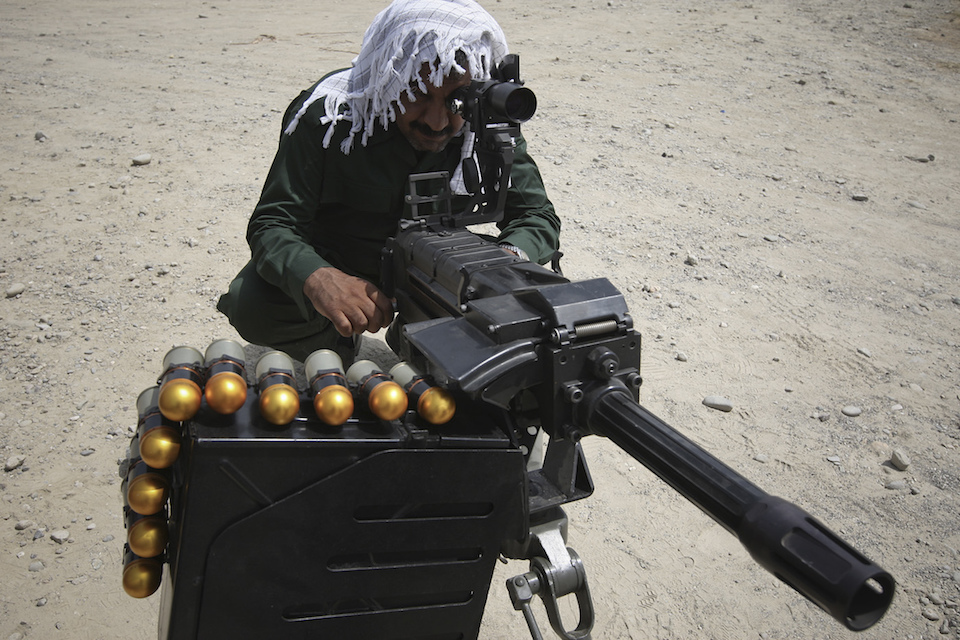 A member of Iran’s Revolutionary guard aim with an anti-personnel gun as he takes part in a war game in the Hormuz area of southern Iran April 24, 2010. REUTERS/Mehdi Marizad/Fars News

Another senior official confirmed that a flourishing economy, which is currently 60 percent dependent on oil exports, would mean extra cash for the Guards’ foreign activities.

“It is very clear that our leaders will not hesitate to allocate more funds to the IRGC when needed. More money means more funds for the IRGC,” said the official. “We don’t want any conflicts but we will continue to help our allies.”

Away from the battlefield, Tehran credits the Guards with helping the domestic economy to survive under the sanctions that Washington first imposed after the 1979 Islamic Revolution and which expanded and tightened over the years.

One Western diplomat who follows Iran closely estimated last year that business activities controlled by the Guards had an annual turnover of $10-12 billion.

Iran refuses to reveal their market share. But an Economy Ministry official said the Guards have been involved in a wide range of industries, including energy, tourism, auto production, telecommunications and construction.

“There are many IRGC-affiliated companies that are involved in various sectors. The Guards helped different sectors to resist the unfair sanctions imposed on Iran for decades.”

The Guards were also rewarded with major contracts after suppressing pro-reform protests that followed Ahmadinejad’s disputed re-election in 2009. A company affiliated to the IRGC bought the state-run telecoms company for about $8 billion.

The Guards’ construction branch, Khatam Al-Anbia, has also won a $1.2 billion contract to build a line on the Tehran metro.

“There was no chance to compete with the Guards-affiliated companies. Most of the time, they were offered contracts without even entering a bid,” said an Iranian trader based in a Gulf country who does business with some IRGC-affiliated firms.

As the U.S. and EU sanctions on Iran’s oil and finance sectors in 2012 started to bite, the Guards responded by setting up complex operations involving the likes of Dubai and Turkey.

“The IRGC started to buy hundreds of small and medium-size companies around the country to use as front companies,” said a trader involved in importing parts for the oil industry. “These companies partnered with some foreign companies to bypass sanctions. Most of the time cash was delivered to a foreign account in a neighbouring country.”

Tehran also asked the Guards to take over energy projects vacated by Western oil companies due to the sanctions, with Khatam Al-Anbia leading development of the giant South Pars gas field.

However, this exposed the limits to their expertise. “The IRGC had the loyalty but its affiliated companies lacked the technology and knowledge and ability to carry out projects,” said a hardline former official. 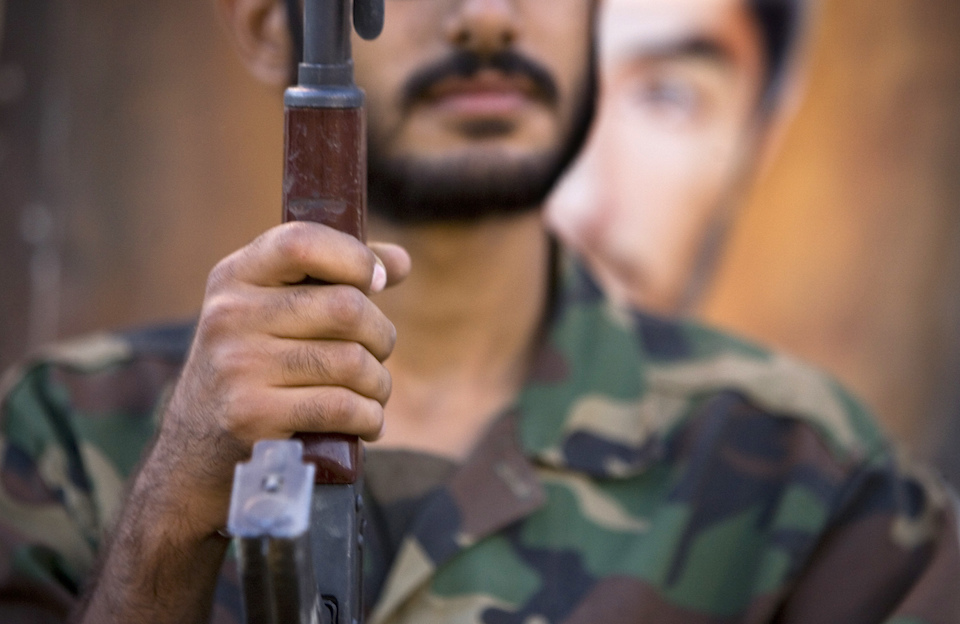 A member of Iran’s Revolutionary guards sits in front of a picture of a soldier at a war exhibition to commemorate the anniversary of Iran-Iraq war (1980-88), at a park in southern Tehran September 26, 2007. REUTERS/Morteza Nikoubazl (IRAN)

Faced with such difficulties, top IRGC commanders have publicly backed the nuclear deal, which in any case would have been impossible to reach without the full support of Supreme Leader Ayatollah Ali Khamenei. The IRGC is loyal to Khamenei.

Analysts say the IRGC is anything but monolithic. Like many hardliners, some senior Guards have been wary of reaching a deal with Iran’s arch foe, the United States, or of the prospect of the economy opening up as Iran’s international isolation ends.

“Some remained more sceptical about dealing with the enemy. But once the system made the decision that the deal is expedient, they fell in line,” said Ali Vaez, Senior Iran Analyst at Washington-based International Crisis Group.

“In the aftermath of the deal, some segments of the IRGC see opportunities in an open market, while others only see threats.”

Among the opportunities, Iran should now be able to get hold of the equipment and expertise it needs to complete the South Pars project. Shortly before the sanctions were lifted, oil minister Bijan Zanganeh said South Pars, the world’s largest gas field, is expected to be developed by 2017.

Iran will also have access to billions of dollars of its frozen assets overseas. Some analysts say the cash will be mainly used to import goods and technology to develop various sectors.

The IRGC-affiliated front companies have benefited the establishment’s support through lower insurance, shipping and banking commission costs when importing equipment and technology.

And as foreign firms enter the Iranian market, they will need a local partner – which for large-scale projects will often mean a firm controlled by the Guards.