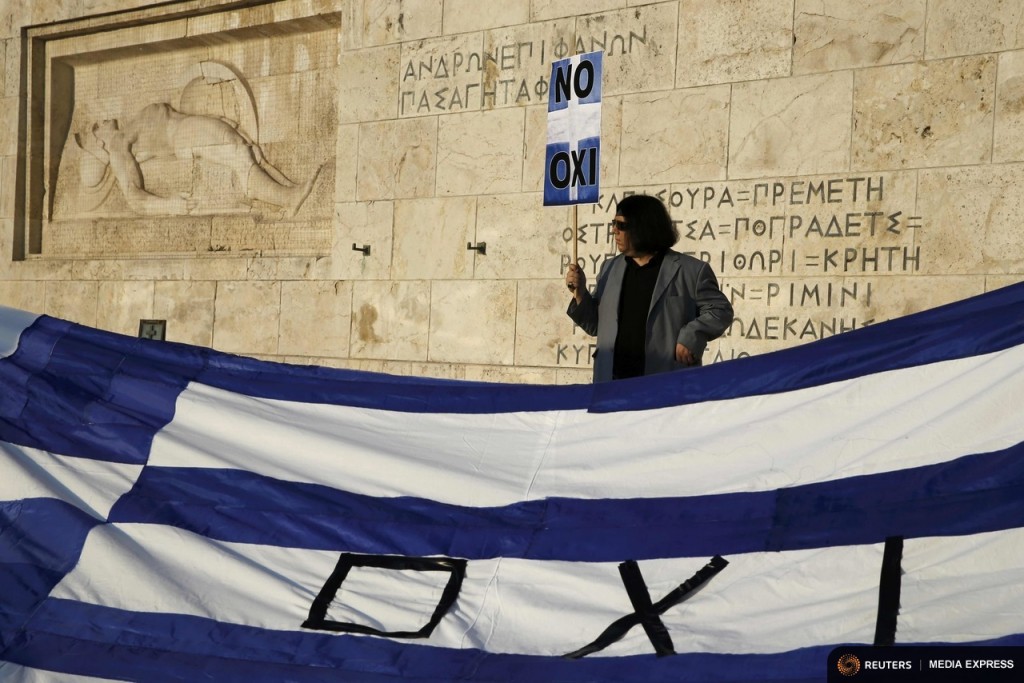 A protester holds a banner in Greek colors in front of the parliament building during an anti-austerity rally in Athens, Greece, June 29, 2015. REUTERS/Yannis Behrakis

ATHENS (Reuters) – EU authorities made a last-minute offer to salvage a bailout deal that could keep Greece in the euro as the clock ticked down on Tuesday, with Germany warning that time had run out to extend vital credit lines to Athens.

With billions of euros in locked-up bailout funds due to expire at midnight, the European Commission urged Greece to accept the proposed deal, while holding out hopes that some tweaks could still be possible.

If no agreement is reached, Greece will default on a loan to the IMF, setting it on a path out of the euro with unforeseeable consequences for the European Union’s grand currency project and the global economy.

Greek officials, who insist that a referendum on the bailout package on Sunday is part of the negotiating process, said they wanted a deal though there was no firm offer or move towards accepting European Commission President Jean-Claude Juncker’s proposals.

However prospects of a breakthrough were dampened by a cool response from German Chancellor Angela Merkel.

“This evening at exactly midnight central European time the programme expires. And I am not aware of any real indications of anything else,” Merkel said at a news conference with Kosovo’s prime minister.

“All I know is that the last offer from the Commission that I’m aware of is from Friday of last week.”

EU and Greek government sources said Juncker, who spoke to Prime Minister Alexis Tsipras late on Monday, had offered to convene an emergency meeting of euro zone finance ministers on Tuesday to approve an aid payment to prevent Athens defaulting, if Tsipras sent a written acceptance of the terms.

He also dangled the prospect of a negotiation on debt rescheduling later this year if Athens said “yes”.

By early afternoon on Tuesday no firm response had been received from Greece, Commission spokesman Margaritis Schinas told reporters.

“As we speak, this move has not yet been received, registered, and time is now narrowing,” Schinas said.

The growing possibility that Athens could be forced out of the single currency brought into sharp focus the chaos that could be unleashed in Greece and the risks to the stability of the euro.

“What would happen if Greece came out of the euro? There would be a negative message that euro membership is reversible,” said Spanish Prime Minister Mariano Rajoy, who a week ago declared that he did not fear contagion from Greece.

“People may think that if one country can leave the euro, others could do so in the future. I think that is the most serious problem that could arise.” 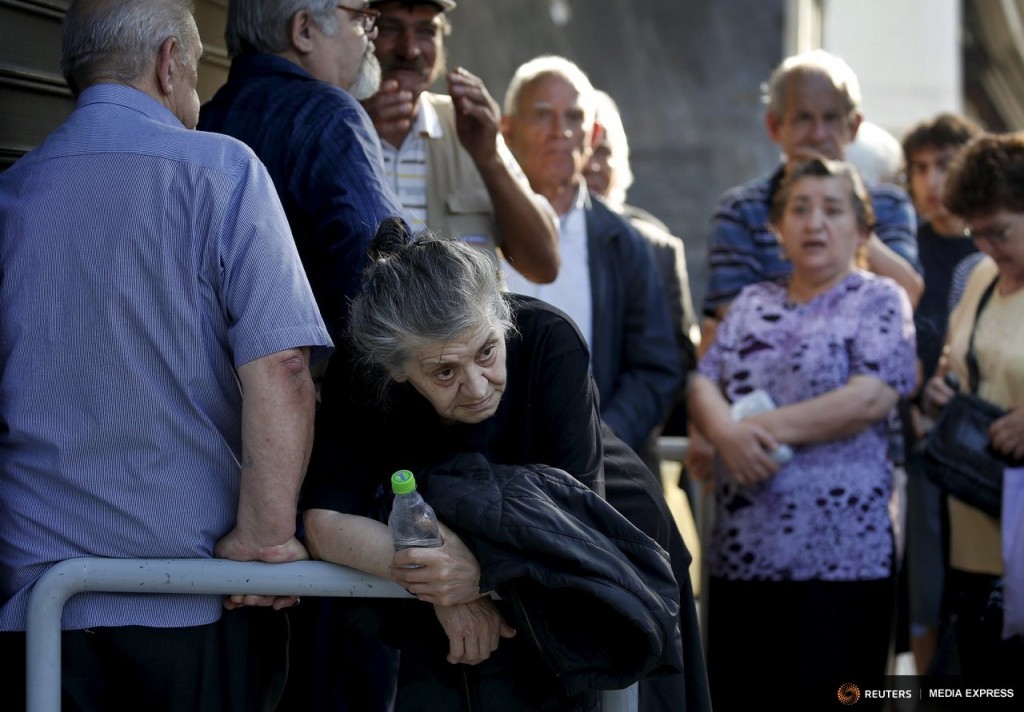 Pensioners line-up outside a branch of the National Bank of Greece hoping to get their pensions, in Athens, Greece June 29, 2015. REUTERS/Yannis Behrakis

The last-ditch bid from Brussels came as uncertainty built ahead of Sunday’s referendum, with a string of European leaders warning that it would effectively be a choice between remaining in the euro or reverting to the drachma.

Opinion polls show Greeks in favour of holding on to the euro but a rally of tens of thousands of anti-austerity protestors in Athens on Monday highlighted the defiance many in Greece feel about being pushed into a corner by the lenders.

Further rallies are expected in coming days, with a demonstration in favour of staying in the euro planned in central Athens on Tuesday.

Tsipras broke off negotiations with the Commission, the IMF and the European Central Bank and announced the referendum on the bailout terms early on Saturday, giving voters just one week to debate the fundamental issues at stake.

Under Juncker’s offer, Tsipras had to send a written acceptance by Tuesday of the terms published by the EU executive on Sunday and agree to campaign in favour of the bailout in the planned July 5 referendum.

European Union leaders hammered home the message that the real choice facing Greeks is whether to stay in the euro zone or return to the drachma, even though the EU has no legal way of forcing a member state to leave the single currency.

Italian Prime Minister Matteo Renzi warned against turning the referendum into a personality contest between Tsipras and Juncker or Merkel.

“This is not a referendum on European leaders. This is a run-off vote: euro or drachma,” Renzi told the Italian business daily Il Sole 24 Ore. 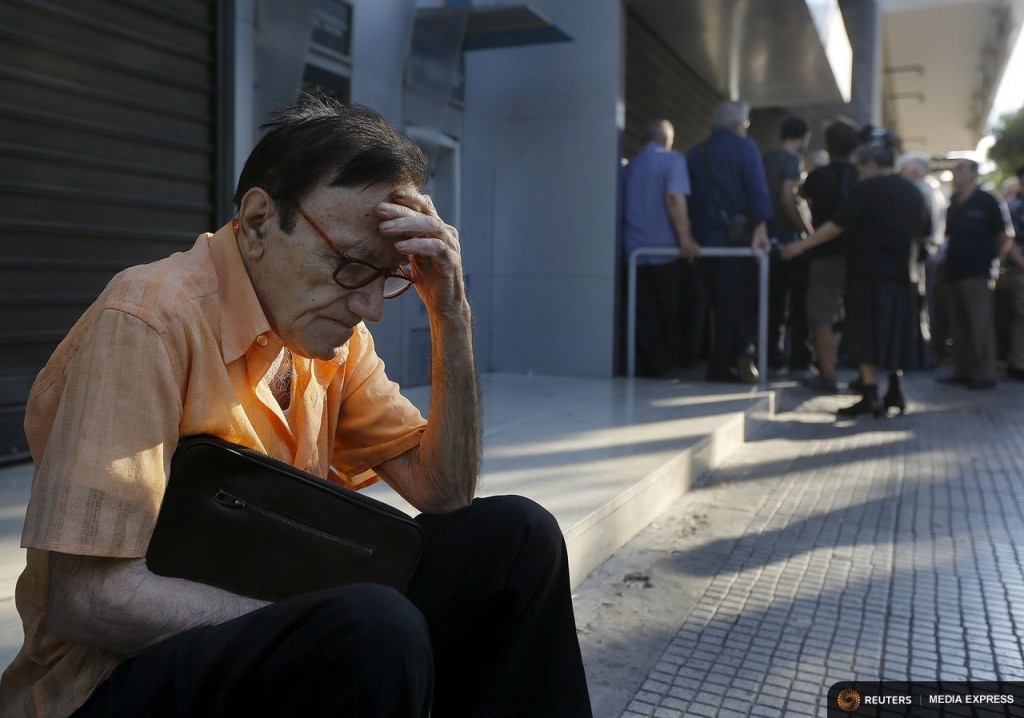 Giorgos, a 77-year-old pensioner from Athens, sits outside a branch of the National Bank of Greece as he waits along with dozens of other pensioners, hoping to get their pensions in Athens, Greece June 29, 2015. REUTERS/Yannis Behrakis

Greece, which has received nearly 240 billion euros in two bailouts from the European Union and International Monetary Fund since 2010, is set to miss a 1.6 billion euro debt repayment to the IMF which falls due on Tuesday.

If that happens, IMF Managing Director Christine Lagarde will immediately report to the global lender’s board at close of business, Washington time, that Greece is “in arrears” – the official euphemism for default.

It will be the first time in the history of the IMF that an advanced economy has defaulted on a loan from the world’s financial backstop, putting Athens, which has seen its economy contract by more than 25 percent since 2009, in the same bracket as Zimbabwe, Sudan and Cuba.

Already the imposition of capital controls to prevent the crippled banking system from collapsing have given Greeks a bitter foretaste of the economic plunge that could follow exit from the euro.

Withdrawal limits of 60 euros a day have been fixed for cash machines and there have been long queues at petrol stations and in supermarkets as worried shoppers have stocked up on essentials like pasta and rice.

There were no immediate signs of serious shortages but if the banks remain closed, cash flow problems which have already been reported by some firms, could worsen.

“So far there are no problems with suppliers, but if the banks are still closed next week there will be a bit of a problem if they demand purely cash payments,” said Charisis Golas, owner of a small meat and dairy shop in Athens.

(Additional reporting by Silvia Aloisi in Milan, Mark John in Paris and George Georgiopoulos and Lefteris Karagiannipoulos in Athens; Writing by Paul Taylor and James Mackenzie; editing by Anna Willard)

The Greek tragedy: a drama with many villains and no heroes, Jonathan Manthorpe column (paywall)

The Greek crisis in photos: