What has gone so horribly wrong with South Africa’s police?

Steven Mothao was walking back home from a piece job on August 10, 2010, through Fordsburg in Joburg. Out of nowhere, three police officers appeared and pushed him against a wall.

While onlookers gawked, the police officers slammed Mothao into a police van. He was detained in a police cell for 22 hours. For the first 14, he wasn’t offered a glass of water. Then Mothao was out on the street again.

The police officers never identified themselves, they did not have an arrest warrant, and they did not inform Mothao of the reasons for his arrest. He sued the Minister of Police for damages and was awarded R150 000 in March.

Since 34 striking miners were shot and killed in Marikana in August last year, South African police have been in the spotlight and at the heart of a debate that has the nation grappling for an answer to the question: what has gone so horribly wrong?

Thomas Kadi had a similar ordeal to Mothao when he worked as a security guard for Protea Coin in Roodepoort in 2007. A few days after some pipes and other building material were stolen, Kadi’s boss and two police officers arrested him. They took him to Roodepoort police station, where he spent three days in custody. 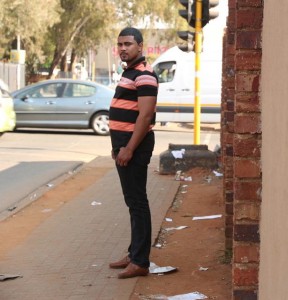 Selwyn Afrikander at the place where he was arrested. Photo by Ruth Hopkins © 2013

After his release he found no charges had been brought against him. There was no arrest warrant and no evidence against him.

The Wits Law Clinic helped him sue the minister. He was awarded R120 000. Despite Kadi being innocent, he was fired, and as a result could not complete the course in criminal justice he was following after work. Ironically, Kadi hoped to qualify as a paralegal so he could help people exercise their rights during criminal trials. His wife divorced him and he now lives in a shack.

Kadi describes the three nights he spent in the cell as “terrible.” “There were people crying, sometimes there were 12 men in the cell and you have no privacy whatsoever. Some are coughing and you know there’s a chance you could get TB. It’s dirty and smelly in there. The blankets… are full of bugs.”

Ekurhuleni metro police clerk Selwyn Afrikander was not only unlawfully arrested, but beaten too.

The 23-year-old was arrested in April while he and a friend were returning home from a bar one Saturday night. As they walked through a dark street in Kempton Park to Afrikander’s house, they were ambushed by police officers. Two police officers grabbed them and pushed them into a van.

“I showed my mother the bruises and cuts on my back and she cried.”

“They drove us to the police station and brought us to a room. They cuffed us, they took their sjamboks out and beat us for about an hour.” The two officers put a plastic bag around Afrikander’s friend’s head and continued beating him.

Eventually the cops let the two men go. As in Mothao’s and Kadi’s cases, there were no warrants for their arrests, the officers never identified themselves and did not bring any charges against them, as is legally required.

When the two men exited the van outside Afrikander’s house the officers assured them they would arrest them again if a coloured person was ever a suspect in Kempton Park.

“I showed my mother the bruises and cuts on my back and she cried,” said Afrikander.

The experience has left him angry. “I don’t trust them (police) and I will never trust an officer again. Whenever I see a police van, my heart pumps harder. I can’t communicate effectively at times anymore, because I have these flashbacks of what happened.

“These two officers are both still on duty. I see them walking the streets in my neighbourhood. I wonder if they will get away with this and if not, who is going to be their next victim.”

Unlike most people who are arrested unlawfully, Afrikander was acutely aware of his rights. The morning after he was beaten up, he went to the police station to file a complaint.

He then visited a hospital, where a doctor tended to his injuries and filled in a J88 form, a standard form that generates medical evidence for someone who has experienced assault.

Afrikander contacted the Independent Police Investigative Directorate (Ipid) to report the crime and to initiate an internal investigation into the assault. His lawyer started a civil suit on his behalf, claiming damages for the unlawful arrest and assault.

No disciplinary measures have been taken against the two officers.

Minister of Police Nathi Mthethwa recently acknowledged that there were many civil claims against the police for unlawful arrests. He said hardly any internal charges of misconduct or criminal procedures had been instituted.

The taxpayer is footing the bill for the damages caused by reckless policing, while the officers and their superiors often get off scot-free.

Mass police recruitment and a declared War on Crime

The reasons for this surge in damages for unlawful police conduct are complex. The police have grown more than 50 percent since 2002. This mass recruitment drive has placed pressure on policing systems. Police training, for example, was shortened from two years to one. Recently the minister increased the length to two years again, but in the meantime, thousands of officers were improperly trained. Oversight, supervision and disciplinary mechanisms have been neglected in the push to accommodate new officers.

This mass recruitment was accompanied by managerial tough talk. Consecutive police ministers and commissioners have declared a war on crime. In 2010, Mthethwa said: “Criminals have defined themselves as outcasts in the community and as such they must be treated. To be where we are, we have waged many battles and will fight many more.”

David Mkhwanazi is another citizen who suffered collateral damage from this approach. The former salesman for a car dealership in Orange Farm was running to catch a train in the Joburg suburb of Ennerdale in 2006 when the police arrested him.

They said he was part of a gang of 10 criminals who had just robbed and murdered an owner of a brick company and were visiting a sangoma to “cleanse” their weapons of fingerprints.

In custody, Mkhwanazi mistakenly signed a document he thought was a bail application – it turned out to be a confession.

The ensuing murder trial was marred by delays. It took six years before he could testify he had nothing to do with the crime. The judge released him for a lack of compelling evidence against him.

He swears he will never trust an officer again.

Mkhwanazi returned to his family in Orange Farm, but he is unemployed, estranged from his wife and daughter and finds it hard to imagine a future. “I am angry with the police and the system, but I don’t know what to do. I can’t afford a lawyer,” he said. He swears he will never trust an officer again.

Illegitimate arrests of citizens will erode the relationship between the men and women in blue and the community they are supposed to serve, said Gareth Newham, head of the governance, crime and justice division of the Institute for Security Studies, at an Institute conference on crime reduction.

“Evidence supports the hypothesis that the less respectful police are towards suspects and citizens, the less people will comply with the law.” Newham presented some worrying statistics. Since 2002, police brutality cases, registered by Ipid, have risen by 313 percent, which translates into a staggering average of five cases a day.

Unsurprisingly, a survey on the image of the police revealed only 41 percent of the population has any trust in the police force while 35 percent admit they are scared of the police.

Two sisters from Benoni, who want to remain anonymous because their civil case against a police officer has not yet been finalised, have gone from trusting the police to being frightened at the sight of a uniform.

“My father was a policeman, we grew up in that kind of environment. I always defended the police, but now I fear them,” the older sister said.

The siblings were at a nightclub in Brakpan in January 2010, when about 15 police officers entered the club, ordered everyone outside and arrested 30 people. The younger sister was herded outside with others and made to stand against the wall.

When her sibling came looking for her, a policeman grabbed her and started hitting her. “He pushed me to the floor, pulled my hair and started kicking me,” she said. She told the officer he was hurting her, but this just egged him on. “He tightened the handcuffs and asked me if I felt the pain.”

Everyone was then pushed into the vehicle, where the abuse continued. “The officer claimed I had used bad language. When I denied that, he punched me in the face several times. When my sister told him to stop hitting me, he punched her in the face too.”

The sisters were detained in a cell for eight hours, then released. They never learnt why they were arrested and there was no warrant or charge sheet. They reported the abusive police officer at the police station, but nothing happened. A few weeks later, they received a letter which stated the National Prosecuting Authority (NPA) had decided not to prosecute. “But I highly doubt they sent the report to the NPA.”

The sisters regularly see the policeman doing his rounds in the neighbourhood. Other members of the community have told them that the officer has not changed his ways, he has beaten up other people, but no disciplinary measures have been taken against him.

This blatant impunity for criminal acts seems to be a general trend: in the past five years, 11 880 criminal cases have been opened with Ipid, but only 129 of these cases led to convictions.

Moreover, 1 448 serving police officers have a criminal record, including for murder rape and assault.

Internal disciplinary procedures do not seem to yield any satisfying results as the most likely outcome – one in five hearings – finalised in 2011/2012 was “not guilty”, whereas one in three resulted in “no sanction” against the accused officer.

The Department of Police was approached for a response to this article, but it declined.