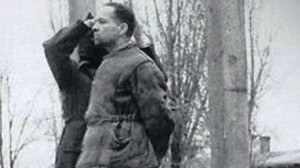 Rudolf Hoess, a commandant of the Auschwitz Birkenau camp, was executed on April 16, 1947 at the camp, after trial in Poland. Hoess walked calmly to the gallows and, once the hangman put the noose around his neck, moved his head to adjust it. A Polish historical journal, Focus Historia, published a photographic record of the execution on the occasion of its 60th anniversary. The Auschwitz Birkenau Memorial Museum has published an account of the German’s last minutes, at auschwitz.org/en/museum/news/auschwitz-commandant-rudolf-hoess-on-the-gallows,461.html. WIKIPEDIA COMMONS