By Louise Mallinder, University of Ulster, The Conversation
August 2014 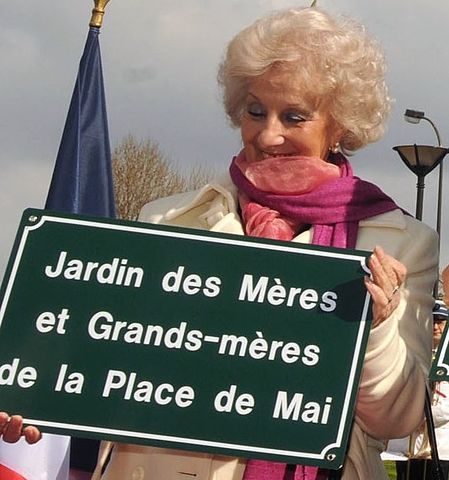 For 36 years, Estela Barnes de Carlotto, one of Argentina’s leading human rights campaigners, has searched tirelessly for her missing grandson. This month, she announced that he had finally been found. This discovery was the result of sustained campaigning by Estela and grandmothers like her, who maintained hope that their relatives were still alive, decades after their “forced disappearances” in Argentina’s “Dirty War”.

Estela Carlotto’s grandson, Guido Montoya Carlotto, was born in a military hospital on June 25, 1978. The previous November, state agents had kidnapped his mother Laura Carlotto, when she was two-and-a-half months pregnant, together with his father. Both were involved in the left-wing Peronist Youth Movement. Laura was detained at a clandestine detention centre during her pregnancy, her child was taken from her five hours after his birth and she was killed two months later.

Laura’s parents received the body of their daughter, but were never informed of the fate of their grandchild who has only just been identified.

Although at one level, this is a private and deeply emotional story, it is also extremely significant for Argentina and offers hope to those around the world who continue to grapple with the legacy of systematic human rights abuses and search for truth, decades after the crimes were committed.

Carlotto is the President of the Grandmothers of the Plaza de Mayo, one of South America’s largest human rights organisations. For decades they have worked to discover what happened to babies born to political dissidents and put up for adoption by the military dictatorship during the Dirty War. Guido is the 114th missing child found by the Grandmothers.

The Argentine armed forces seized power in March 1976 and established a brutal regime that lasted until their defeat in the Falklands/Malvinas conflict. During the dictatorship, whole categories of people and institutions came to be viewed as enemies. Contrary to the military’s propaganda this included not just sympathisers of guerrilla groups, but also citizens who worked towards social change of any sort.

At least 9,000 people, though some estimates put it at as high as 30,000, a figure that received official endorsement in 2006 were imprisoned, tortured or killed.

As illustrated by the De Carlotto story, even babies and young children were at risk of being kidnapped, before having their identities changed and being given to supporters of the regime to raise as their own children. According to the Grandmothers, approximately 500 children had their identities concealed.

From 1977, mothers and grandmothers searching for their disappeared children and grandchildren began staging courageous weekly protests outside the office of the president in the Plaza de Mayo in central Buenos Aires. These protests became a very visible site of resistance to the military regime and, later following the transition, of the women’s enduring demands that the fates of their relatives be investigated. The heroism of these women, coupled with the inexcusable nature of crimes committed against children, enabled the Grandmothers’ struggle to remain one of the most high-profile human rights issues during Argentina’s political transition.

In 1987, the Grandmothers were able to lobby their democratically elected politicians to create a National Genetic Data Bank, the world’s first DNA bank. In 1992, they were influential in the establishment of a National Commission for the Right to Identity to investigate their children’s whereabouts. Both institutions gave official support to the Grandmothers’ search for truth. They continue to function today and played a role in the identification of Guido Carlotto who took a DNA test to confirm his true identity.

The Grandmothers also shaped international law. In 1990, during negotiations on the UN’s Convention on the Rights of the Child, they successfully campaigned for the inclusion of articles on a child’s right to an identity. These provisions became part of Argentine law following constitutional reforms in 1994. And, these legal developments made it easier to prosecute those responsible for the kidnapping and concealment of children within Argentina.

Due to its indefensible nature, these crimes were explicitly excluded from the amnesty laws introduced following Argentina’s transition to democracy. From the 1990s, legal cases brought by the Grandmothers resulted in convictions of military personnel and the families who adopted the children of the disappeared.

This made visible an anomaly whereby the perpetrators could be prosecuted for the kidnapping of a child, but not for the disappearance, torture or murder of the child’s parents. The anomaly eventually contributed to a Supreme Court decision to declare the amnesty laws unconstitutional. The decision paved the way for the reopening of hundreds of criminal cases for military-era abuses in Argentina and has been influential in the unpicking of amnesty laws elsewhere in the region.

In the early years of its transition, Argentina was a model to other societies grappling with the legacy of a violent past. It created a respected truth commission and the “junta trials” that prosecuted the leaders of the military regime, going on to make an impressive transition to a stable democratic state.

But human rights organisations continued to denounce the role that perpetrators of previous human rights abuses were able to play within Argentine society, which in some cases involved them continuing to commit violent offences. For example Estela Carlotto was the victim of an attempted assassination in 2002 when gunshots were fired at her house from a speeding car in the middle of the night. It is believed that those responsible wanted to silence her demands for truth.

This event, together with the identification of her grandson, remind us that it can take many decades for societies to recover from mass atrocities. Casting light on the crimes of the past is an essential part of this process, not just to provide a remedy for the victims and survivors, but also to ensure that progress towards protecting human rights is safeguarded.

Louise Mallinder previously received funding from the Arts and Humanities Research Council for research on Argentina. She is affiliated with the Committee for the Administration of Justice.