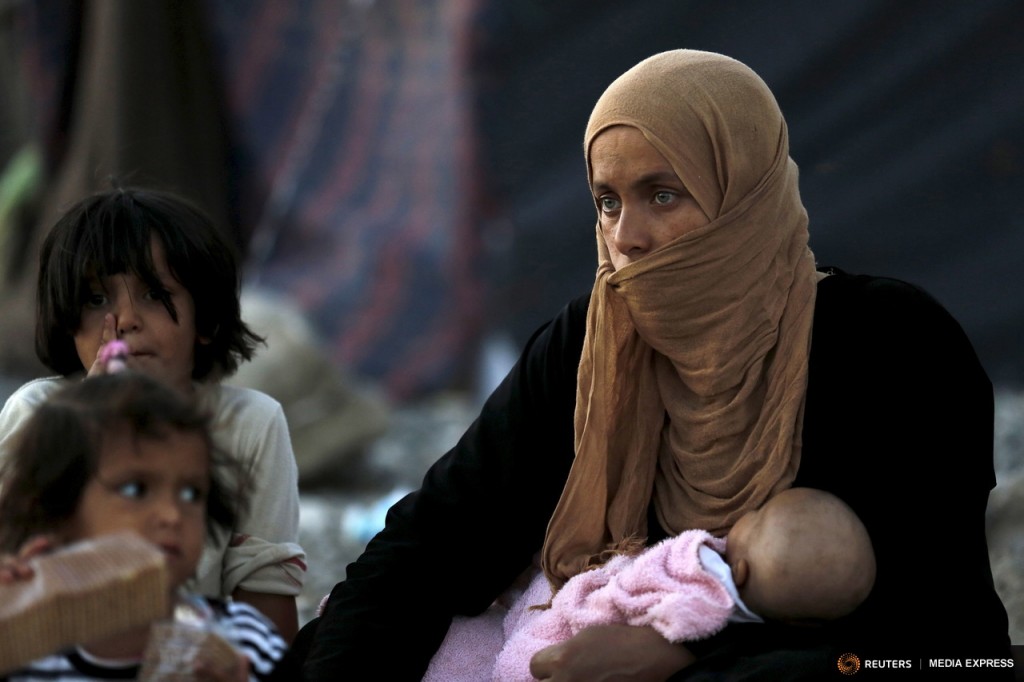 A refugee from the northern Syrian town of Tel Abyad and her children wait while spending the day in Akcakale, in Sanliurfa province, Turkey, in this June 18, 2015 file picture. REUTERS/Umit Bektas/Files

AKCAKALE, Turkey (Reuters) – Cemal Dede fled his home in a remote Turkmen village in Syria after warplanes from the U.S.-led coalition against Islamic State bombed the house next door. He had no idea he wouldn’t be coming back.

Dede says the Kurdish YPG militia did not let his family of seven return to Dedeler near the Turkish border, telling him it was now Kurdish territory and Turkmens like him had no place there.

“When Islamic State was there, they persecuted people. Now there is YPG and they are no different,” the 43-year old told Reuters in an impromptu settlement of refugee tents at a disused truck depot near Turkey’s Akcakale border gate.

“We don’t support any group, but still we are stripped of our right to live in our own land.”

The Kurds, who have emerged as the U.S.-led coalition’s most capable partner in Syria against Islamic State on the ground, strongly deny having forced people of other ethnic groups out of territory they have seized. They say those who left did so to escape fighting and are welcome to return with guarantees of their safety.

“When you come inside Tel Abyad, you’ll see that the Arabs, Muslims, Turkmens, the Armenian people, all of them – they are living together,” said Idris Nassan, an official in the Kurdish administration for the Kobani canton, which includes Tel Abyad.

“It is multi-cultural, multi-national, multi-sectarian. The protectors of this administration are the YPG, the People’s Protection Units. That refers to all people. We are not just for the Kurdish people,” he told Reuters by telephone.

But accusations that non-Kurds have been forced to flee, described as “ethnic cleansing” by neighbouring Turkey, have tarnished the Kurds’ reputation even as their success against Islamic State on the ground has raised their stature.

Backed by U.S. air strikes, the YPG and smaller Syrian rebel groups captured the border town of Tel Abyad from Islamic State on June 15, prompting more than 26,000 people to flee to Turkey.

With nearly half the length of Syria’s border with Turkey now in Kurdish hands, Ankara fears the creation of an autonomous Kurdish region in northern Syria which could inflame separatist sentiment among its own Kurdish population. It accuses Kurdish fighters in Syria of links to the PKK militant group, which has waged an insurgency against the Turkish state for three decades.

Some Kurds say fear among refugees is being whipped up by Turks to discredit them.

“This is a psychological war waged against Kurds,” said Dengir Mir Mehmet Firat, a member of the Turkish parliament from the pro-Kurdish opposition HDP.

“The (Turkish) government said that it doesn’t want the (Kurdish) cantons to be united, and when it happened they are now trying to create negative public opinion because they are angry. They’re playing a dangerous game by igniting nationalistic feelings.”

Rami Abdulrahman, director of the Syrian Observatory for Human Rights, a UK-based group that monitors the Syrian war with a network of sources on the ground, says there has been no evidence of systematic expulsion by Kurdish militias on the grounds of ethnicity, despite isolated cases.

But new father Yasin Saeed, who fled Suluk, a Syrian Arab village around 20 km (12 miles) east of Tel Abyad as Kurdish forces entered over a month ago, said he was afraid to return.

“If you are not a Kurd but an Arab who has been living under Islamic State rule, they automatically see you as someone who supports and aids the group,” he said, sat in a tent, as his wife played with their 8-month-old daughter.

“THE BARRELS ARE POINTING AT US”

Tel Abyad had been held since January 2014 by Islamic State, the Sunni hardline group which has seized large parts of Syria and Iraq and declared a caliphate, and which proudly boasts of the extreme violence it metes out to its enemies.

Most of the refugees in the make-shift camp near Akcakale, established by the Turkish authorities, lived for more than a year under Islamic State rule. They have few good memories, although they say it was a period of relative stability.

Around 4,000 have returned, according to Turkish officials. The rest have either been placed in refugee camps around Turkey’s southeast or have sought refuge with relatives, much like the 1.8 million other Syrian refugees Turkey is now sheltering.

Saeed said that unless the Kurdish militias left his home region, he had no plans to go back.

“The distrust between Kurds and Arabs has been there for years. But now they are at an advantage because they have guns and the barrels are pointing at us,” Saeed said.

U.S. Defence Secretary Ash Carter said this month that Washington was supporting the Syrian Kurds because they were “capable of acting”, although U.S. officials have also said they do not support a separate Kurdish entity in northern Syria.

“We are very clear in communicating our expectations to (the Syrian Kurds) about the behaviour they should be exercising in the areas where they have recently pushed Daesh (Islamic State) off the border,” U.S. ambassador to Turkey John Bass told reporters this month, emphasising that displaced civilians must be allowed to return.

In Syria’s multi-sided civil war, the Kurds have often avoided conflict with the government of President Bashar al-Assad, although the YPG says it does not cooperate with Damascus. Some Arabs and Turkmens suspect the Kurds of having a tacit agreement with Assad.

“They’ve been spared by Assad,” said another refugee, Halil, 32, whose cousin was executed by Islamic State this year and who asked not to use his surname for security reasons. “Assad has carried out all sorts of atrocities against many groups, but hasn’t touched the Kurds. Why?” he said, sipping tea and drawing on a cigarette.

“America, which never helped Syrian Arabs and didn’t give us weapons to protect ourselves against Bashar (al-Assad), is now arming the Kurds. And they’re using that against us.”