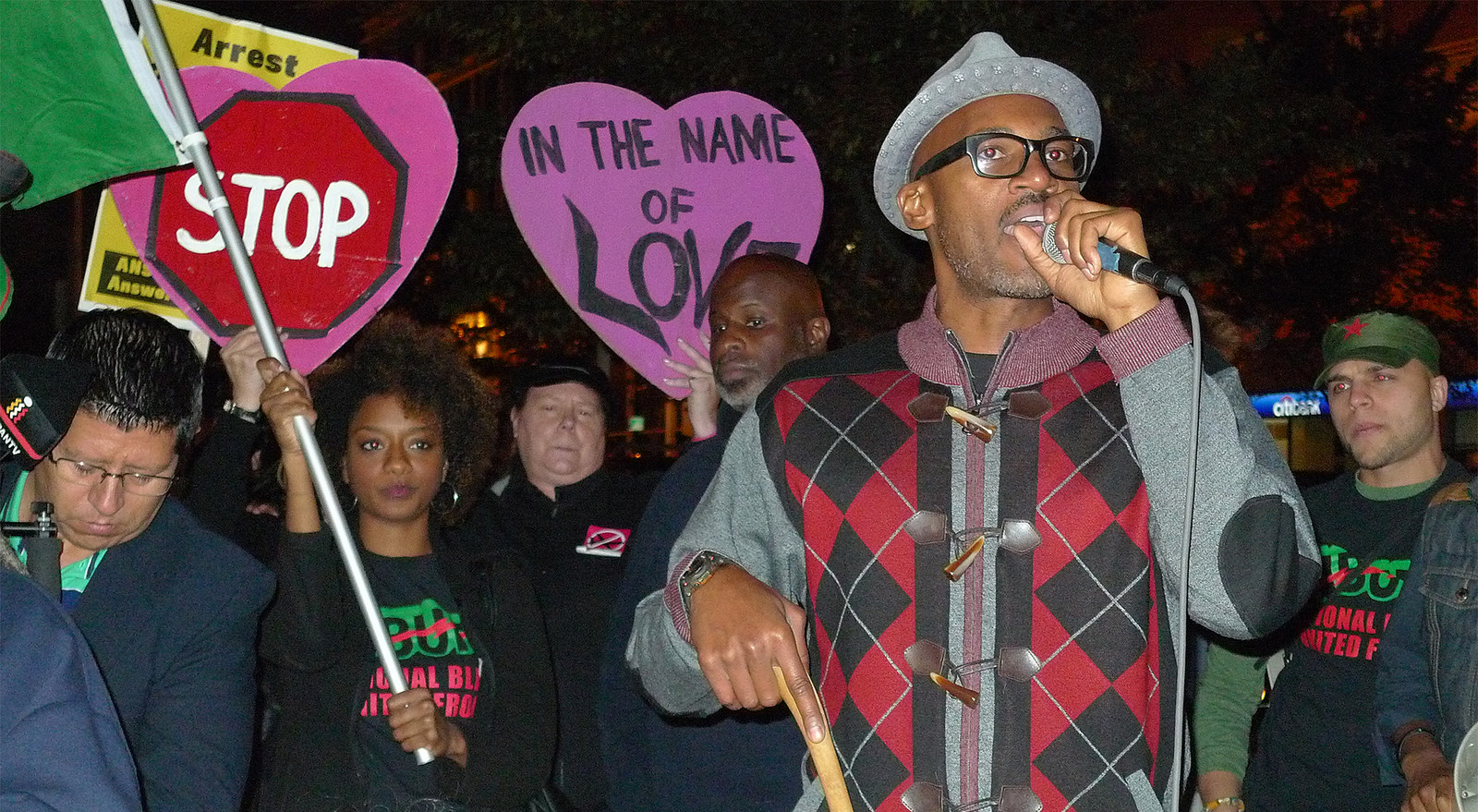 Statistics show that American blacks are being killed at disturbing rates when set against the rest of the American population, reports ProPublica. Above, demonstrators march in Washington, D.C. on October 4 to protest the shooting of Michael Brown in Ferguson. Photo by Susan Melkisethian via Flickr, Creative Commons

Young American black males in recent years were at a far greater risk of being shot dead by police than their white counterparts – 21 times greater i, according to a ProPublica analysis of federally collected data on fatal police shootings.

One way of appreciating that stark disparity, ProPublica’s analysis shows, is to calculate how many more whites over those three years would have had to have been killed for them to have been at equal risk. The number is jarring – 185, more than one per week.

ProPublica’s risk analysis on young males killed by police certainly seems to support what has been an article of faith in the African American community for decades: Blacks are being killed at disturbing rates when set against the rest of the American population.

Our examination involved detailed accounts of more than 12,000 police homicides stretching from 1980 to 2012 contained in the FBI’s Supplementary Homicide Report. The data, annually self-reported by hundreds of police departments across the country, confirms some assumptions, runs counter to others, and adds nuance to a wide range of questions about the use of deadly police force.

Colin Loftin, University at Albany professor and co-director of the Violence Research Group, said the FBI data is a minimum count of homicides by police, and that it is impossible to precisely measure what puts people at risk of homicide by police without more and better records. Still, what the data shows about the race of victims and officers, and the circumstances of killings, are “certainly relevant,” Loftin said.

“No question, there are all kinds of racial disparities across our criminal justice system,” he said. “This is one example.”

The FBI’s data has appeared in news accounts over the years, and surfaced again with the August killing of Michael Brown in Ferguson, Missouri. To a great degree, observers and experts lamented the limited nature of the FBI’s reports. Their shortcomings are inarguable.

There is, then, value in what the data can show while accepting, and accounting for, its limitations. Indeed, while the absolute numbers are problematic, a comparison between white and black victims shows important trends. Our analysis included dividing the number of people of each race killed by police by the number of people of that race living in the country at the time, to produce two different rates: the risk of getting killed by police if you are white and if you are black.

David Klinger, a University of Missouri-St. Louis professor and expert on police use of deadly force, said racial disparities in the data could result from “measurement error,” meaning that the unreported killings could alter ProPublica’s findings.

However, he said the disparity between black and white teenage boys is so wide, “I doubt the measurement error would account for that.”

ProPublica spent weeks digging into the many rich categories of information the reports hold: the race of the officers involved; the circumstances cited for the use of deadly force; the age of those killed.

The finding that young black men are 21 times as likely as their white peers to be killed by police is drawn from reports filed for the years 2010 to 2012, the three most recent years for which FBI numbers are available.

The black boys killed can be disturbingly young. There were 41 teens 14 years or younger reported killed by police from 1980 to 2012 ii. 27 of them were black iii; 8 were white iv; 4 were Hispanic v and 1 was Asian vi.

That’s not to say officers weren’t killing white people. Indeed, some 44 percent of all those killed by police across the 33 years were white.

Who is killing all those black men and boys?

Mostly white officers. But in hundreds of instances, black officers, too. Black officers account for a little more than 10 percent of all fatal police shootings. Of those they kill, though, 78 percent were black.

What were the circumstances surrounding all these fatal encounters?

There were 151 instances in which police noted that teens they had shot dead had been fleeing or resisting arrest at the time of the encounter. 67 percent of those killed in such circumstances were black. That disparity was even starker in the last couple of years: of the 15 teens shot feeling arrest from 2010 to 2012, 14 were black.

Certainly, there were instances where police truly feared for their lives.

Of course, although the data show that police reported that as the cause of their actions in far greater numbers after the 1985 Supreme Court decision that said police could only justify using deadly force if the suspects posed a threat to the officer or others. From 1980 to 1984, “officer under attack” was listed as the cause for 33 percent of the deadly shootings. Twenty years later, looking at data from 2005 to 2009, “officer under attack” was cited in 62 percent xxxvii of police killings.

Does the data include cases where police killed people with something other than a standard service handgun?

i ProPublica calculated a statistical figure called a risk ratio by dividing the rate of black homicide victims by the rate of white victims. This ratio, commonly used in epidemiology, gives an estimate for how much more at risk black teenagers were to be killed by police officers.Risk ratios can have varying levels of precision, depending on a variety of mathematical factors. In this case, because such shootings are rare from a statistical perspective, a 95 percent confidence interval indicates that black teenagers are at between 10 and 40 times greater risk of being killed by a police officer. The calculation used 2010-2012 population estimates from the U.S. Census Bureau’s American Community Survey.

xl Calculated from the “Weapon Used by Offender” variable. Ranked based on frequency of reported shotgun homicides by police agencies.