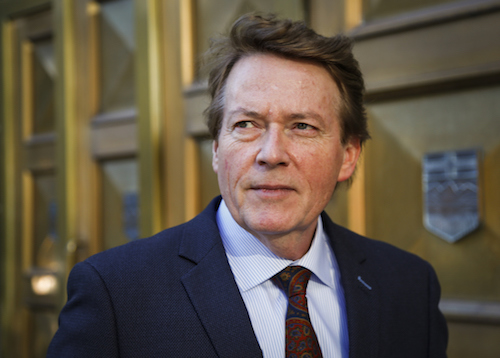 An award-winning Canadian war correspondent who left television journalism to enter politics won a defamation lawsuit against Canada’s largest newspaper publisher and one of its former columnists. Arthur Kent was awarded $200,000 in compensatory damages.

Kent, who acquired the nickname “Scud Stud” while reporting for NBC News on Iraqi missile attacks against Saudi Arabia during the 1991 Persian Gulf war, launched the defamation suit against Canwest. The media chain, now-defunct, was formerly the corporate owner of the National Post, Calgary Herald, Edmonton Journal and other Canadian newspapers. In February, 2008, it published an opinion piece by political columnist Don Martin that Kent characterized in court as “poisonously false.”

Court of Queens Bench Justice Jo’Anne Strekaf ruled that the current corporate owner, Postmedia Network, is liable because it continued to publish the Martin column online for more than two years after it purchased Canwest’s newspapers and archival databases in 2010. She criticized Canwest for “exercising virtually no editorial oversight over the article prior to its publication,” and said some of the factual material in the column did not meet the test for accuracy.

Postmedia’s lawyer had asked that “nominal” damages be awarded if the judge was to rule in Kent’s favour, but she disagreed.

“I find that Mr. Kent is entitled to significantly more than nominal damages,” she wrote in her 60-page decision. “He suffered substantial distress and damage as a result of the defamatory statements in the article.” She said that while some of the opinions expressed might be regarded as fair comment – as argued by the defence – the article as a whole “would cause right-thinking members of society to think less of Mr. Kent.” (The classic definition of defamation includes any published material that tends to “lower a person in the estimation of right-thinking men.”) Justice Strekaf said the column contained a “harshly critical personal tone” not found in other newspaper commentaries on the Kent campaign.

The judge said the damage to Kent’s reputation was “exacerbated by the exaggerations and sarcastic tone in the article.” The overall tenor of the article, she said, was that Kent is a “politically naïve, arrogant, has-been journalist with a huge ego whose election campaign is in disarray and who is doomed to become an ineffective MLA if elected.”

Court testimony had revealed that Martin used information from unnamed Conservative party sources to contend that Kent’s campaign for a seat in a Calgary, Alberta provincial riding was failing because the “self-absorbed” star candidate refused to toe the party line and become “a mere infantry private who exists only to follow orders.” Kent suffered a narrow defeat in the election.

Martin acknowledged in court that he didn’t make direct contact with Kent for comment before his column appeared. The judge cited this failure as being unfair to Kent, and also pronounced as unfair the failure by the media defendants to provide Kent with an opportunity to respond to the Martin column after publication. Kent testified that he had submitted a 754-word rebuttal to the column that Postmedia refused to run either in edited form or print as a letter to the editor. Kent added that Postmedia also refused to publish an apology or issue a retraction. A Postmedia editor said the rebuttal, which named old guard party supporters that Kent refused to have on his campaign team, was rejected because it was “defamatory in nature.”

A contentious paragraph in the Martin column – which he retracted during the trial – asserted that a number of Alberta Conservatives had referred to Kent as “the Dud Scud.” “This statement does not qualify as truth or reportage,” ruled the judge. Martin had admitted under cross-examination that perhaps one – not several – Conservatives had used the “dud scud” phrase to describe Kent, but he could not remember who that source was. “I’d write it differently today.” None of the witnesses acknowledged using the phrase.

Kent, who pursued the lawsuit for more than seven years, said the judge’s ruling reinforces the fundamental principles of responsible journalism: “No genuine journalist will be anything other than reassured and encouraged by this decision. Truth still matters in journalism. Truth, accuracy and balance matter on the internet.”

He added that it took him years to obtain e-mails and other records from the corporate defendants to substantiate his case.

Martin, who now works as a television presenter for Canada’s CTV News network, had no comment on the court decision. Nor did his current employer. A spokesperson for Postmedia would only say the company is “reviewing the decision.” The judge said that if the two sides were unable to agree on legal costs, they could provide written submissions within 45 days of the decision.

A Canadian war correspondent who left television journalism to enter politics has received $250,000 in legal costs – $972,990 less than he sought – after winning a defamation lawsuit against Canada’s largest newspaper publisher and one of its former columnists.

Arthur Kent had been awarded $200,000 in compensatory damages plus $60,000 in interest in June 2016 when he won his case against Postmedia Network and its political columnist Don Martin. Kent and his lawyers said it was the first time in Canadian judicial history – “certainly since World War Two” – that a journalist and news company were found guilty at trial of defaming an election candidate. They also said it was “a first in the age of Internet publication.”

Kent, who acquired the nickname “Scud Stud” while reporting for NBC News on Iraqi missile attacks against Saudi Arabia during the 1991 Persian Gulf war, launched the defamation suit against Postmedia’s predecessor, Canwest. This media chain, now defunct, was the corporate owner of the National Post, Calgary Herald, Edmonton Journal and other Canadian newspapers. In February 2008, the chain published an opinion piece by columnist Martin about Kent’s bid for elected office. Martin claimed in his column that unnamed Conservative party sources, who opposed Kent’s candidacy, referred to him as “the dud scud.” Kent described the column in court as “poisonously false.”

Court of Queens Bench Justice Jo’Anne Strekaf ruled that Postmedia was liable because it continued to publish the Martin column online for more than two years after it purchased Canwest’s newspapers and archival databases in 2010. She criticized Canwest for “exercising virtually no editorial oversight over the article prior to its publication” and said some of the factual material in the column did not meet the test for accuracy.

The judge said that because most of Martin’s sources had only negative things to say about Kent, the columnist should have made a more reasonable attempt to contact Kent, and done more to verify the reliability of his critics’ comments. She noted that the widely-cited ethics guidelines of the Canadian Association of Journalists state that people who are publicly accused or criticized should have an opportunity to respond – even if only to decline comment – before the accusations or criticisms are published.

After winning the case, Kent’s lawyers asked the judge to award him $1,222,990 for his legal costs, incurred over a period of more than seven years. The Postmedia lawyers responded that each side should pay its own costs.

In reducing Kent’s claim to $250,000, Justice Strekaf ruled that many of the legal fees he incurred related to “matters that did not advance the litigation.”  She added he was not entitled to costs associated with a separate, unsuccessful lawsuit he launched against Conservative party members he accused of conspiring to undermine his campaign.

Kent, in a written statement, said he and his lawyers are “taking careful measure of several specific findings” and that “full comment must wait for another time.” He added he did not pursue the suit for monetary gain. “I did it to reveal the truth and set the record straight.”

While pleased with his court victory, Kent said “there has to be a just economic outcome as well.” Echoing comments made in a 2011 speech by Canada’s Chief Justice, Beverley McLachlin, he noted that most Canadians – except for the wealthy – don’t have adequate access to the justice system because of the high costs involved. “Through my journalism, and at law,” said Kent, “I am obliged to even the dollars and cents side of the access-to-justice ledger. Just watch me.”

Postmedia made three offers to settle the defamation case before it went to trial. They ranged from $150,000 to $325,000. All were rejected by Kent and his lawyers, partly because none involved an admission of wrongdoing or an undertaking to retract, correct, or apologize for the offending column. “The concept of an apology or retraction is baked into defamation law,” Kent’s lawyer Michael Bates told the judge. He added that the conditions for accepting the third and final offer were “literally absurd” because they stipulated that Kent could not say anything publicly about the settlement or file the decision with the courts. That, said Bates, gave Postmedia “all of the benefits with none of the obligations or responsibilities.”

Kent also sought an injunction prohibiting Postmedia and Martin from republishing the offending column. Justice Strekaf dismissed this application on grounds that Kent failed to demonstrate there was “any meaningful prospect” the article might be republished. Postmedia’s lawyers had characterized Kent’s concern about republishing as “pure speculation.”

Former columnist Martin, who now works as a television presenter for Canada’s CTV News network had no immediate comment after Kent won the original case. He has since told iMediaEthics that he behaved responsibly by trying to get Kent’s side of the story before publishing.

“Columnists are under no legal or ethical obligation to contact a public figure who is the subject of a fair comment analysis,” said Martin. “But I contacted the email address on a news release, and that seemed a reasonable step. He had the better part of a day to respond and didn’t.”
Martin disagreed with the judge’s comment that what he called a quest for truth was, in fact, a search for negative information about Kent. In one email, for example, Martin had asked a source if she had “any more dirt” on the candidate. “I do not share (the judge’s) supposition that seeking the truth in a politically controversial situation to be inappropriate,” Martin told iMediaEthics. “There wouldn’t be much investigative journalism if we only went digging for positive news.”
Postmedia representatives told iMediaEthics they had no comment on the judge’s original ruling other than to say they would not appeal. “We do not wish to relitigate the case in the media.”
Under Alberta’s Rules of Court, the two sides have one month to decide whether or not they will seek leave to appeal the costs judgment.

Brian Brennan, an Irish journalist living in Canada, is a founding feature writer with Facts and Opinions and a contributor to Arts dispatches and the Loose Leaf salon. He is the author of the Brief Encounters series. (Payment required). His profile of Calgary Mayor Naheed Nenshi, the first original feature in the journal’s inaugural issue, won Runner-up, Best Feature Article, in the 2014 Professional Writers Association of Canada Awards. Brennan was educated at University College Dublin, Vancouver’s Langara College, the Poynter Institute in St. Petersburg, Florida, and the National Critics Institute in Waterford, Connecticut.