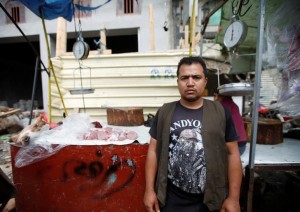 Mahir al-Ruzaiq Saleh, 29, a butcher, poses for a photograph in Sanaa, Yemen, April 29, 2016. “The dialogue in Kuwait is a failure, enough is enough. What was taken by force can only be restored by force. No dialogue in the world has succeeded. America plays with the world and the Middle East,” he said. Anxiety reigns in the Yemeni capital Sanaa, where ordinary people await the outcome of almost a month of peace talks they hope can end a devastating war. REUTERS/Mohamed al-Sayaghi