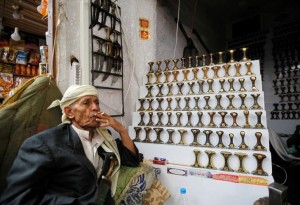 Ahmed Hizam al-Soudi, 75, who sells traditional Yemeni curved daggers called jambiyas, poses for a photograph in Sanaa, Yemen, April 21, 2016. Al-Soudi said he hoped wisdom would prevail among negotiating parties in Kuwait. “We ask God to relieve us from this ordeal, which we were not expecting,” al-Soudi said. “God willing, they would agree, because we are exhausted. And if they love the country, they will stop the war that brought devastation and destruction to the people of Yemen.” Anxiety reigns in the Yemeni capital Sanaa, where ordinary people await the outcome of almost a month of peace talks they hope can end a devastating war. REUTERS/Mohamed al-Sayaghi