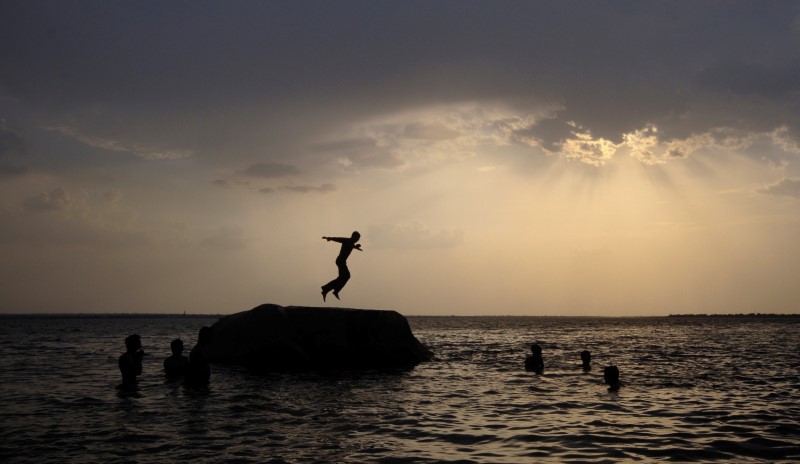 A boy prepares to jump off a rock into the waters of the Osman Sagar Lake near the southern Indian city of Hyderabad May 29, 2011. REUTERS/Krishnendu Halder/File Photo

HYDERABAD, India (Reuters) – Centuries ago, Indian princes would bathe in the cool Kazhipally lake in Medak. Now, even the poorest villagers here in India’s baking south point to the barren banks and frothy water and say they avoid going anywhere near it.

A short drive from the bustling tech hub of Hyderabad, Medak is the heart of India’s antibiotics manufacturing business: a district of about 2.5 million that has become one of the world’s largest suppliers of cheap drugs to most markets, including the United States.

But community activists, researchers and some drug company employees say the presence of more than 300 drug firms, combined with lax oversight and inadequate water treatment, has left lakes and rivers laced with antibiotics, making this a giant Petri dish for anti-microbial resistance.

“Resistant bacteria are breeding here and will affect the whole world,” said Kishan Rao, a doctor and activist who has been working in Patancheru, a Medak industrial zone where many drug manufacturers have bases, for more than two decades.

National and local government are divided on the scale of the problem.

While the Central Pollution Control Board (PCB) in New Delhi categorizes Medak’s Patancheru area as “critically polluted”, the state PCB says its own monitoring shows the situation has improved.

The rise of drug-resistant “superbugs” is a growing threat to modern medicine, with the emergence in the past year of infections resistant to even last-resort antibiotics.

In the United States alone, antibiotic-resistant bacteria cause 2 million serious infections and 23,000 deaths annually, according to health officials.

Thirteen leading drugmakers promised last week to clean up pollution from factories making antibiotics as part of a drive to fight the rise of drug-resistant superbugs, while United Nations member countries pledged for the first time to take steps to tackle the threat.

Patancheru is one of the main pharmaceutical manufacturing hubs in Telangana state, where the sector accounts for around 30 percent of GDP, according to commerce ministry data. Drug exports from state capital Hyderabad are worth around $14 billion annually.

Local doctor Rao pointed to studies by scientists from Sweden’s University of Gothenburg that have found very high levels of pharmaceutical pollution in and around Kazhipally lake, along with the presence of antibiotic-resistant genes.

The scientists have been publishing research on pollution in the area for nearly a decade. Their first study, in 2007, said antibiotic concentrations in effluent from a treatment plant used by drug factories were higher than would be expected in the blood of patients undergoing a course of treatment. That effluent was discharged into local lakes and rivers, they said.

“The polluted lakes harbored considerably higher proportions of ciprofloxacin-resistant and sulfamethoxazole-resistant bacteria than did other Indian and Swedish lakes included for comparison,” said their latest report, in 2015, referring to the generic names of two widely used antibiotics.

Those findings are disputed by local government officials and industry representatives.

The Hyderabad-based Bulk Drug Manufacturers Association of India (BDMAI) said the state pollution control board had found no antibiotics in its own study of water in Kazhipally lake. The state PCB did not provide a copy of this report, despite several requests from Reuters.

“I have not seen any credible report that says that the drugs are no longer there,” Joakim Larsson, a professor of environmental pharmacology at the University of Gothenburg who led the first Swedish study and took part in the others, told Reuters by email.

“There might very well have been improvements, but without data, I do not know.”

Local activists and researchers say the Common Effluent Treatment Plant (CETP) built in Medak in the 1990s was ill-equipped to handle large volumes of pharmaceutical waste.

After protests and court cases brought by local villagers a 20-km (12-mile) pipeline was built to take effluent to another plant near Hyderabad. But activists say that merely diverted the problem – waste sent there, they say, mixes with domestic sewage before the treated effluent is discharged into the Musi river.

A study published this year by researchers from the Indian Institute of Technology, Hyderabad, found very high levels of broad-spectrum antibiotics in the Musi, a tributary of the Krishna, one of India’s longest rivers.

Local government officials responsible for the plants did not respond to Reuters’ requests for comment.

Nearly a dozen current and former officials from companies producing medicines in Patancheru told Reuters that factory staff from various firms often illegally dump untreated chemical effluent into boreholes inside plants, or even directly into local water bodies at night.

All the officials spoke on condition of anonymity and Reuters was unable to independently verify those allegations.

“Mylan is not dumping any effluent into the environment, borewells or the CETP,” said spokeswoman Nina Devlin.

Dr Reddy’s said it recycled water onsite and complied with all environmental regulations.

The same industry officials who spoke to Reuters said the pollution control board rarely checked waste-treatment practices at factories, adding that penalties for breaches were meager.

The Telangana state government did not respond to requests for comment.

“We are aware some companies are releasing more than the allowed effluent, but they are profit-making companies,” said state PCB spokesman N. Raveendher. “We do try and take action against the offenders, but we cannot kill the industry also.”

Many smaller companies also lacked the funds to install expensive machinery for treating waste, he added.

A series of local court cases have been filed stretching back two decades, accusing drug companies of pollution and local authorities of poor checks. In some cases, companies have been ordered to pay annual compensation to villagers, but many are still grinding through India’s tortuous legal system.

Wahab Ahmed, 50, owns five acres of land near the shores of Kazhipally lake, where he grew rice until a decade ago. He says the worsening industrial pollution from several nearby pharmaceutical factories left his land barren.

“We have protested, sued, and done all sorts of things over the years … that’s how some of us are now getting around 1,700 rupees (roughly $20) a year from the companies,” he said.

“But what can you do with that small sum today?”

More than 200 companies were named as respondents in the case he was referring to, filed by a non-profit organization on behalf of villagers.

While pollution of farmland is a serious problem for villagers who depend on it for their livelihood, the potential incubation of “superbugs” in Medak’s waterways has wider implications.

The issue is particularly worrisome in India, where many waterways also contain harmful bacteria from human sewage. The more such bacteria are exposed to antibiotics, the greater the chances they will mutate and render such drugs ineffective against them.

The risk is that resistant bacteria would then infect people and be spread by travel.

So far, most of the focus worldwide on antimicrobial resistance has been on over-use of drugs in human medicine and farming.

“Pollution from antibiotic factories is a third big factor in causing antimicrobial resistance,” the chairman of one of the world’s largest drugmakers told Reuters. “But it is largely overlooked.”