There are terrible forces at work in Nepal 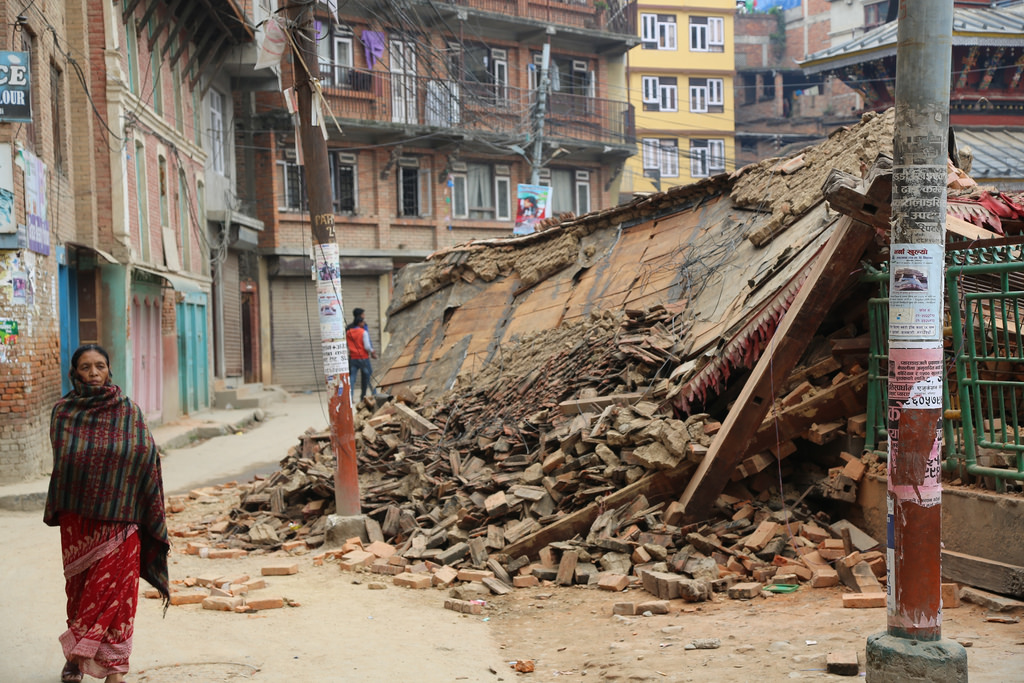 KATHMANDU, Nepal — The world media is awash in images of death and devastation in Nepal. It’s an oddly schizophrenic experience to be ‘watching’ the current crisis from the dual perspectives of participant and observer — both on the ground and over the Internet. That’s life in a disaster zone in the Information Age.

We live in Dhobighat, a relatively new neighbourhood of Kathmandu, and our street is tiny but always busy: an overgrown, badly-paved footpath travelled every day by noisy schoolchildren, motorcycles, vegetable carts, honking taxis, young women arm in arm, gleefully reckless children on bicycles, and old people out for a walk because their daughters remind them that it’s good for them. It’s a middle-class neighbourhood, congested and chatty, and at sundown everybody goes to the dhobi — the communal well after which the area is named — to gossip and watch the boys play a little football, and to fill up their water containers for the night.

We live here because we work at the local international school, teaching the kids of ex-pat families and local folk who want an international education for their children. It’s a nice school, and our students are great — creative, thoughtful young people who have seen something of the world and who are building the skills (we hope) to act on their plans for a better world. It’s an immediate community of more than six hundred people, and all us survived the quake — the students and their immediate families, workers and support staff, teachers and all.

Dhobighat is a mess right now, but we know we’ve been very lucky. Houses have collapsed. A small child was killed nearby. We’re worried about our students, of course; many of them have been sleeping in the streets or in parks since the earthquake hit Saturday, and they’re all far too young to deal with this emotionally. But we’re getting something organized at the school for those who can make it in, and online for those who have Internet but can’t travel. People in Dhobighat have lost much. Some have lost everything. But this is a relatively wealthy and well-built part of town. Most people in our neighbourhood survived. We’ve already started cleaning up. 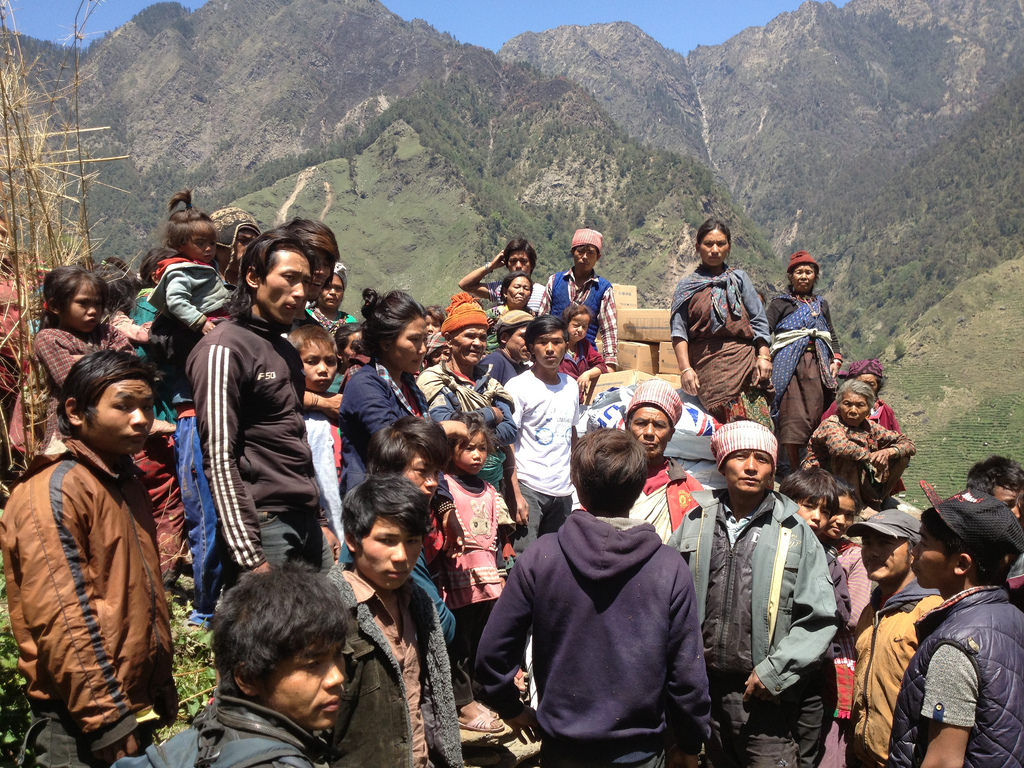 In Nepal’s countryside and in the poorer parts of urban areas villages were devastated, or just gone, wiped out, their families with them, writes Renee Comesotti. Above, rural earthquake survivors wait for aid workers to  distribute tarpaulins donated by USAID. Photo ACTED 2015, Creative Commons

It’s a different story out in the countryside, and in the poorer parts of town. Many of our friends’ villages were devastated. Others are just … gone, wiped out, their families with them.

There are no words to describe this. The dhobi is full of people today — they’ve been sleeping there, under tarpaulins — but nobody’s talking much. Everyone knows everyone, which means everyone knows where everyone else’s family was when the quake struck — the parents, the little nieces and nephews, the old aunties and uncles, the friends, their villages, their farms. Everyone knows, so there’s no need to ask and not much to say.

The children mostly seem as riotous as ever, kicking old soccer balls around.

Most of the people who died were already living in desperate poverty. Their homes were ancient and picturesque because they couldn’t afford to build newer, safer ones. All Nepalis know how dangerous those old buildings are; they talk about it all the time. These close-knit families watch their grown children leave Nepal by the thousands, every year, to work in dangerous, underpaid jobs abroad so that they can send money back to Nepal to build better homes. It’s never enough.

Some other time, I’ll write about the many acts of generosity, friendliness, solidarity and resolute cheerfulness that we see here every day, even now. I am moved more than I can say by the uncomplaining courage and dignity of my neighbours and the people of Nepal. The man at little shop — who lost everything and whose name I don’t even know — asking me if my daughter was okay. My little friend Felix, age five, telling me pointedly that he’d like to help with those dishes — but not until I put my helmet on for protection. The kids camped in the field next door, sharing their rice with a street dog. The women laughing as they lurch toward a makeshift laundry line, staggering under the weight of rain-soaked bedding.

But right now all I can think is this: Nepal deserves better. These are hardworking, capable people who are probably more stoic than is good for them. Their suffering was caused not by the earth shifting but by the constant, grinding movement of resources away from those who have not, toward those who already have.

An event of this magnitude does things to your head. Here at our house everybody’s coping, but nobody’s finishing sentences. We’re moving slowly and having a difficult time staying focused. Questions get asked, nobody answers and no one notices. Decisions are made and we forget to act on them.

It all feels strangely familiar. There are terrible forces at work here — and I’m not talking about earthquakes.

But this is different. People should want to help out, and they do. Our empathy — the thing that drives us to communicate, to reach out to one another and be part of another’s experience — is what our overgrown frontal lobes are all about. It’s why we have social media in the first place.

For the many good people who have something to spare and who want to help, my best advice is to first look around and find some locally-based organization with roots in the community, here in Nepal. Be as sure as you can be that they’ll use the money here on the ground, first to provide emergency services and then to rebuild — and to make it safer this time. I’ve heard of people pledging support for a family for a year, during the rebuilding. That seems like a good idea to me.

In the longer term, what we can all do is stop getting caught up in systems that leave us disempowered and smother our better instincts. We can elect governments that will ensure a more equitable world, in which countries like Nepal are not impoverished by unjust economic structures. We can demand change.

Renee Comesotti is from Vancouver. She and her partner, Brad Waugh, work at the Lincoln School in Kathmandu; she teaches literature and he’s the secondary principal. They’ve taught abroad for nearly fourteen years.

This essay was first published by iPolitics.ca. It is published here with Renee Comesotti’s permission.

Nepal Then: a doctor’s journey, by Christine Gibson