The Hitchbot’s Guide to a Continent 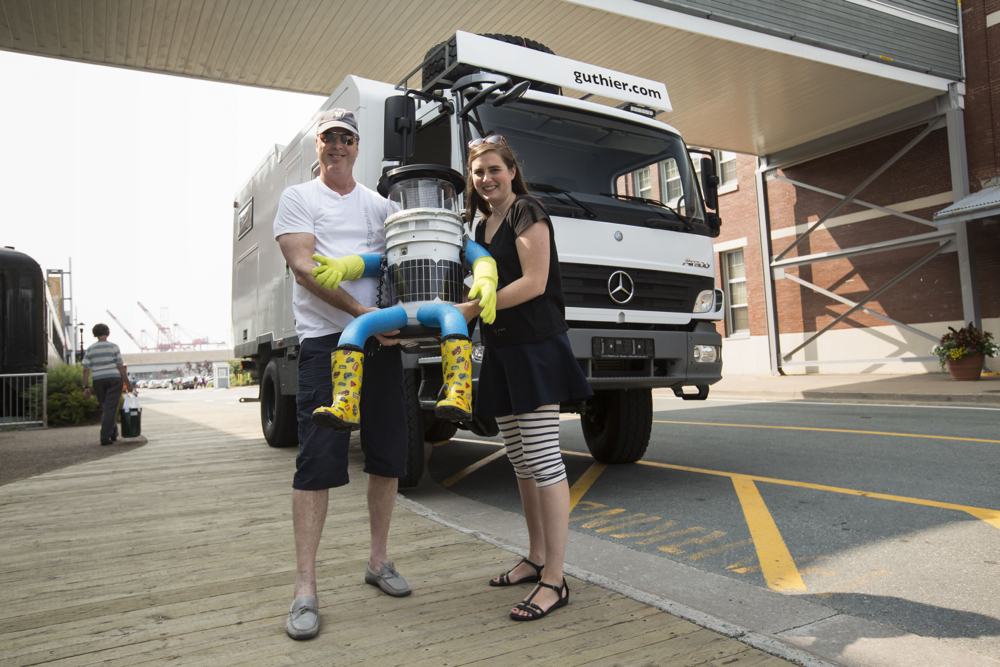 Tweeting, GPS-equipped robot Hitchbot managed it, hitchhiking across Canada this summer from Halifax, Nova Scotia to Victoria, British Columbia. The cylindrical robot, sporting a digital LCD smile and a fetching line in matching yellow rubber gloves and boots, completed the 6,000km journey in around 20 days.

Unlike the robots of the big screen, which tend to come equipped with advanced intelligence and search-and-destroy capabilities, Hitchbot is social, friendly, and entirely human-dependent. It relied only on the kindness of strangers it met along the way to pick it up, put it in their vehicles, and take it as far as they could toward its final destination.

David Harris Smith and I conceived the idea for Hitchbot as an opportunity to set an experimental, technological art project free in the wild. Combining arts and science knowledge (and David’s years of experience as a hitchhiker), we thought a hitchhiking robot would provide a fascinating experience for the public, and would offer some insight on how humans interact with robots. We’re delighted to be receiving a Top 30 Innovation Award at this year’s Silicon Valley Innovation & Entrepreneurship Forum, so it seems others see the same appeal.

We put the robot down on the side of the highway on July 27, 2014, in Halifax and watched it get picked up by its first travel companions, Anne and Brian Saulnier. Heading to Kouchibouguac National Park in New Brunswick, this was the first of 19 hitches that allowed Hitchbot to traverse the country.

Arriving in Victoria on August 17, the trip was faster and more eventful than we could have imagined. Highlights of the trip included attending a Pow Wow with the Wikwemikong First Nation on Manitoulin Island, doing the Harlem Shake with three travel companions in Saskatchewan, and attending the wedding of Kyle Shepherd and Julie Branch on Kicking Horse Mountain in Golden, B.C.

As Hitchbot’s family we were overwhelmed by the kindness of those who helped the robot cross the country. The willingness to see the project succeed affirmed what people often say about Canadians – that they are warm, polite, and hospitable. Monitoring the journey unfold from Toronto our team never caught wind of anyone attempting to harm Hitchbot. Instead, each participant was charmed by the robot, showed it love, and genuinely wanted to help it reach Victoria.

The initial question we posed was whether robots can trust human beings – inverting the more common worry of artificial intelligence’s trustworthiness towards humans. While the result shows that the answer seems to be “Yes”, it also demonstrated that by setting the project up as an engaging art and science project, people were eager to get involved. It developed into a participatory event, proving how much interest art and sciences can evoke among the public.

From a scientific point of view, Hitchbot’s progress showed not only the relevance of social media but also that the field of human-robot interaction goes beyond just physical interaction: it is also the personality, communication abilities and ability to actively shape the interaction that seems to invite people to trust a robot and to be willing to engage with it.

This also applies to the design. Whereas Hitchbot’s communication features were more rudimentary compared to high-tech artificial intelligence robots that come at high costs, Hitchbot’s design actually made people want to engage and connect. The design was chosen and intended to instill trust, and also to encourage people to help Hitchbot – so the decision to have it the height of a six-year-old child. The overall design, with matching yellow gloves and boots was meant to be quirky and fun, which turned out to be rather appealing to people.

Many people from around the world have enquired whether Hitchbot will be making trips through the US or Europe – an encouraging sign that a project like this could succeed in places other than Canada. For now, we’re still deciding what trips may come next.

This article was co-authored with Hitchbot family member Alanna Mager.