At Royal Holloway College at the University of London, Edwin Landseer’s picture Man Proposes, God Disposes (1864) is covered by a Union Flag every year during exams. Not because of any fears of cheating during history exams but because students believe they will fail their exams (or even go mad) if they look at it. This fear of the painting goes back a long way in the history of the college.

The subject matter of the picture is highly grisly and macabre. It was based on events that have been brought back into the limelight with the announcement that the Canadian government has discovered one of the two boats used in the doomed Franklin expedition of 1845. It is the tales about this mission which inspired the horror stories that frighten the students.

Landseer’s painting depicts two polar bears savagely attacking one of these ships as well as the human remains of the crew who embarked on the failed expedition, led by John Franklin, to find the North-West passage. Finding this pass was extremely important to British merchants and sailors in the 19th century as it would link the Atlantic and Pacific oceans and so significantly cut the length of crucial voyages.

Man proposes, God disposes reveals just how distressing the Victorians found the failure of this scientific expedition and the plight of the crew. 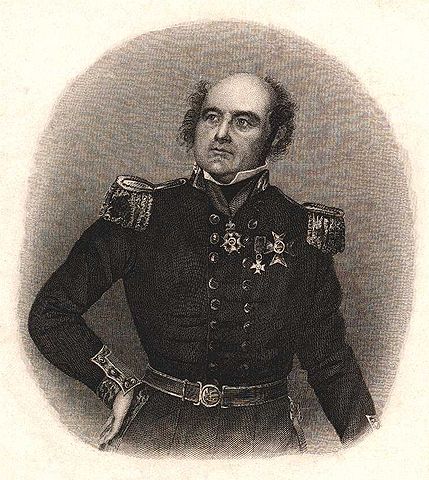 John Franklin. Victorians were distressed by the failure of his expedition and the grisly plight of his crew.

Franklin was an experienced explorer of the icy realms around the Arctic. He set off in 1845 with two Royal Navy ships, 129 men and supplies for three years. The expedition left to much excitement on May 19 1845. By 1848, when no word of them had been heard, numerous search and rescue missions were sent out. Few found anything concrete until in 1854 John Rae headed a mission. He spoke to the local Inuit community, who had met some of the remaining crew after they had abandoned their ships. They had also found the bodies of those men they’d previously met the following year. The Inuit had also found objects from the expedition including Franklin’s telescope, seen in the painting. Most gruesome, however, was their discovery of bones belonging to members of the crew. Some showed the marks of cannibalism.

On returning to England Rae’s grisly report caused outcry. The Victorians believed utterly in their superiority as the most advanced and civilised nation in the world. They thought no civilised, Christian man would stoop to such barbaric levels and many used these notions to dismiss the reports of cannibalism. Even Charles Dickens waded into the debate.

With such a macabre history it’s remarkable that Thomas Holloway (1800-1883), the founder of the college, bought the painting for display his new institution for female education. It is certainly not the sweet, sentimental type of picture that many of his contemporaries would have deemed suitable for young women. But he knew that he was creating a collection for enquiring minds, those who would want to investigate and discuss the issues highlighted by the painting – such as the ideas of man versus nature, or the notion of a civilised society.

Holloway had made his money selling pills and ointments using the most modern forms of advertising. In his company’s global heyday there were bill-boards advertising his products at Niagara Falls in Canada and by the Great Pyramid in Egypt. Towards the end of his life he and his wife, who had had no children, turned to philanthropy and built both a Sanatorium for the treatment of mental illnesses and a college for the university-level education of women. It was for the college that Holloway amassed a collection of 77 contemporary paintings by the leading artists of the day.

Holloway’s desire for the work by Landseer was so strong that he paid £6,615 for it. This broke the record for the highest sum ever paid at auction for a work by a contemporary artist. His burning desire to buy the painting may be explained by the discovery after his death of newspaper clippings about the expedition amongst his effects revealing his own personal interest in the fate of the ships and their crew.