Nepal Then: a doctor’s journey

Canadian physician Christine Gibson was volunteering in Nepal when the first major earthquake hit April 25.  She reflects here on her first trip to Nepal as a resident 15 years ago, and how the shattering experience eventually set her on course to working internationally in family medicine. Christine Gibson, a hospitalist in Calgary, Alberta, is the volunteer executive director of Global Familymed Foundation. 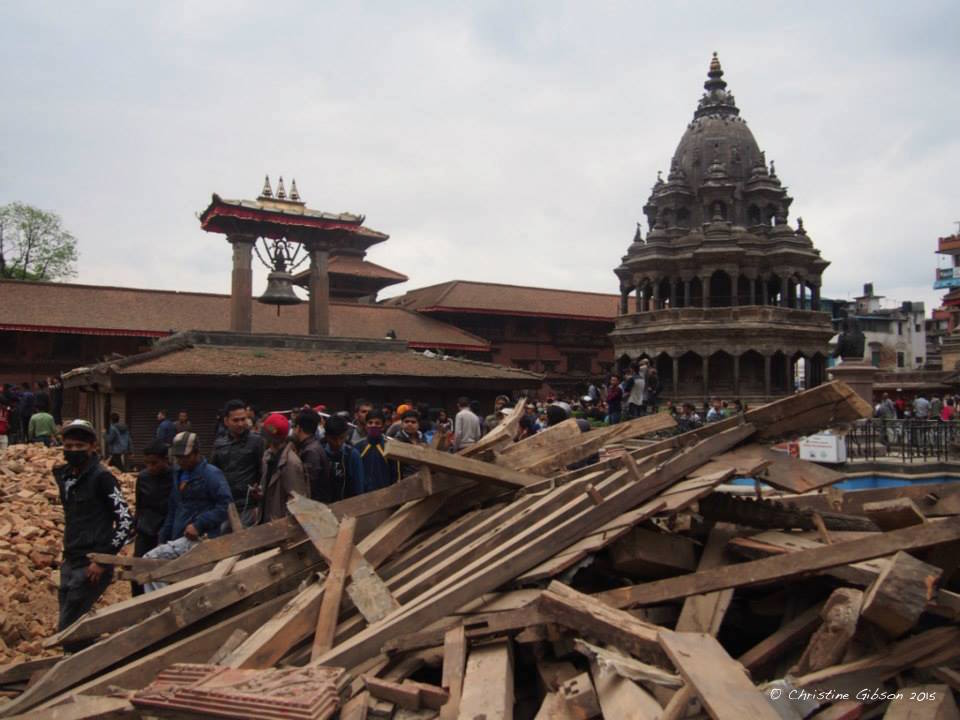 I first went to Nepal in 2000 as an enthusiastic Family Medicine resident. I trekked half the Annapurnas, no road then so it was relatively arduous solo hiking, but the friendliness of locals made me feel so welcome. The beauty of these dusty stretches in Mustang with prayer flags draped over temples, the sheer drops off rope bridges between snow-capped cliffs, and the warm smiles of the Tibetans and Nepalis on that border were incredible. But there was change brewing; you could see the signs even then. I visited schools where the blackboard was commandeered by Maoist slogans which would result in often-lethal consequences if erased. People were too afraid to push back. They were peaceful, often Buddhist (most of Nepal is Hindu) farmers and peasants who opened their small clay homes for the backpacking crowd. In Pokhara I gave away my hiking boots, worn to the metal, and headed to my elective.

My first few weeks were in Emergency with Dr. Pratap Prasad at Tribhuvan Teaching University.  I recall struggling emotionally witnessing the hardships of life there, knowing that I would never fully understand the social determinants of health from these cases.

Families whose mud-brick homes had fallen on them during their sleep, caving in parts of heads and chests. Teenagers attempting suicide – young girls promised to marry old men by their fathers who could no longer feed them – drinking insecticide, froth pouring from congested lungs. We would intubate and hand the bag-mask to their family members: “just push the bag to inflate their lungs every five seconds.” Others had set themselves on fire, and I kept hoping they would die quicker.

I didn’t see a single survivor from the multiple cases we had each day. Even if we’d had a mechanical ventilator, such equipment often breaks down in countries where repair is not possible. Nepal has so few resources, even the tiny cost of lab tests were preclusive to many.

I would walk back along the northern Ring Road through tuktuk clouds, tears waiting to fall until I sequestered myself in my room.

We had no “global health mentoring” in those days, no Skype, and I felt unbearably hopeless.

My next posting was in Surkhet, a 19 hour bus west through precarious winding roads. Outside the Kathmandu valley, roads dropped sharply into terraced fields until we hit the terrai. I kept hoping a new bus driver would change shifts, but no one relieved him (or wide-eyed me).

Surkhet then was a small rural hospital with a fantastic GP resident manning the show. Together, we saw end-stage wasting from TB, patients too poor or too far for attending clinics for medicine. A thin young baby dying from measles encephalitis, tell-tale dots spotting her mouth. The leprosy hospital, shadowy holes marking noses and digits. The final stages of things I had only expected to see in textbooks (Fournier’s gangrene, Ludwig’s angina, and other such uncommon names). Patients walking three days or more for care had often waited until they must. Or they have to, like the woman who walked that distance to remove the baby who had tried to birth feet-first, his blackened feet still dangling as she walked, growing more septic with each step.

She survived, and I could see that this hospital was doing everything it could in the harshest of circumstances. A good, comprehensive doctor with a primary care team made all the difference. A young Canadian who didn’t now local context or resources could only do so much.

So I returned home shattered.

It was six years until hope returned. I kept traveling, engaging with people and cultures, learning and growing. Then I learned of the Laos project.

A Calgary team had been asked by the Laos Ministry of Health to work with the sole medical school around creating a more effective training program. Local leaders realized that the majority of their population was not benefitting from the existing health system; they simply lived too far away from centralized care. Educators from the University of Calgary worked with them and they determined to start a Family Medicine residency, with the government mandating the graduates to work more remotely. A needs assessment was done to ask health care workers and community leaders in rural areas what the priority health issues were for these populations, and the inaugural curriculum was designed around these topics.

I learned of the project during an evening presentation by two of its participants. Then I basically sat on somebody’s foot until they agreed I could join the project. I made my first trip in 2007, when the third batch of residents were enrolled.

In my eight years on the project I had the opportunity to learn about the many innovative and inspiring measures implemented during the program’s creation: needs assessment determining learning objectives, multiple stakeholders’ input; a “train the trainer” approach, where we encouraged Family Medicine residents to become the next teachers then watched them shine in leadership roles, graduating as extraordinary physicians, who serve these smaller Provincial and District Hospitals.

To make myself more useful, I had enrolled in a Masters in Medical Education, then studied Tropical Disease at LSHTM in London, UK. This was exactly what I wanted to do with my international experiences: work with local initiatives, build capacity, grow relationships ….

When finally I left Laos in search of new opportunities, and partnerships with leaders creating or examining Family Medicine training. It brought me back to Nepal.

One of the unique features of Family Medicine is that graduates can work in remote settings, since they can manage the majority of issues that arise. In most settings in Asia and Africa, they might work in a hospital environment. Sometimes incorporating public health into their roles, often learning surgeries (setting fractures, doing Cesarean sections), always learning what their community needs. Since in most of these emerging nations have a vast majority still residing in rural areas, they can serve the population that needs them the most.

In Nepal, despite shifting demographics around life in the Kathmandu valley, the majority still live rurally. Many had come into the central valley to escape the Maoist insurgency in the intervening years since I was first there. Makeshift tarp villages, new mud brick homes, overcrowded apartments were spilling over with families. But the valley has easier access to resources; remote villages in Nepal are often reached on long journeys over dangerous roads rendered impassable during the monsoon months. Life expectancy in rural areas is 20% less than in the Kathmandu valley.

In October, 2014, I accompanied international consultant Dr. Bob Willard to the Patan Academy of Health Sciences (PAHS) in the Kathmandu valley; Patan is one of three cities nestled in this crater, a school designed to graduate health care workers  able to work in Nepal’s rural settings. Their first batch of medical students is scheduled to graduate this year, and then begin a required year of clinical internment before they could decide if they want to specialize. Many will simply work where the are posted, not studying beyond the five years of medical school, but others are keen to study GP medicine, since they are committed to working in a village.

Life will not be easy, some will be separate from the rest of their family while their children attend private school in the valley. One described his home-town hospital with no electricity, so the citizens had set up solar links. They would often have minimal administrative supports, a constant undersupply of medicine, and impossibly long days as the sole physician in town. Even the surgeries they might be trained to perform would be impossible due to lack of instruments and trained assistants, so they would have to watch patients, their community, die a death they could have prevented.

They become prepared and more confident for this life through PAHS training, and a curriculum focus on marginalized populations. For 17 weeks of their final year, they study both clinical medicine and public health in four remote training sites. It costs the equivalent of a physician’s monthly salary to get these students to these villages, but PAHS recognizes this as imperative to their mandate. Students who learn in these environments, especially those who grew up in remote regions, are the most likely to stay. There is good research proving this, and it is so foundational to PAHS’s mandate that they must give them the best chance of success. Global Familymed Foundation has now this expense as a fundraising effort.

I have a lot to learn on an ongoing basis here in Nepal. From my initial encounters with a sense of hopelessness and inability to contribute to returning with a purpose. By working on capacity building, engaging with local leadership, designing learning around the community needs, and measuring success, there is an opportunity to leverage up the success I am seeing. Building capacity in an area with such great need and finding sustainable solutions to rural health inequities will be the dream I hadn’t yet conceived of during my first visit here. 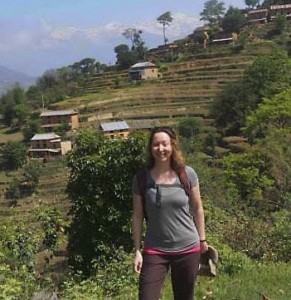 Christine Gibson is an associate professor at University of Calgary, Hospitalist at the Peter Lougheed Centre in Calgary, Alberta, and volunteer Executive Director at Global Familymed Foundation, which supports Family Medicine  in areas where access to health care is limited.

The Global Familymed Foundation is fundraising for Patan Hospital in Nepal.  Click here to support it, or other foundation projects, at www.globalfamilymed.org.

There are terrible forces at work in Nepal, by Renee Comesotti

Facts and Opinions is an online journal of select and first-rate reporting and analysis, in words and images: a boutique for select journalism, without borders. Independent, non-partisan and employee-owned, F&O performs journalism for citizens, funded entirely by readers. We do not carry advertising or solicit donations from foundations or causes.