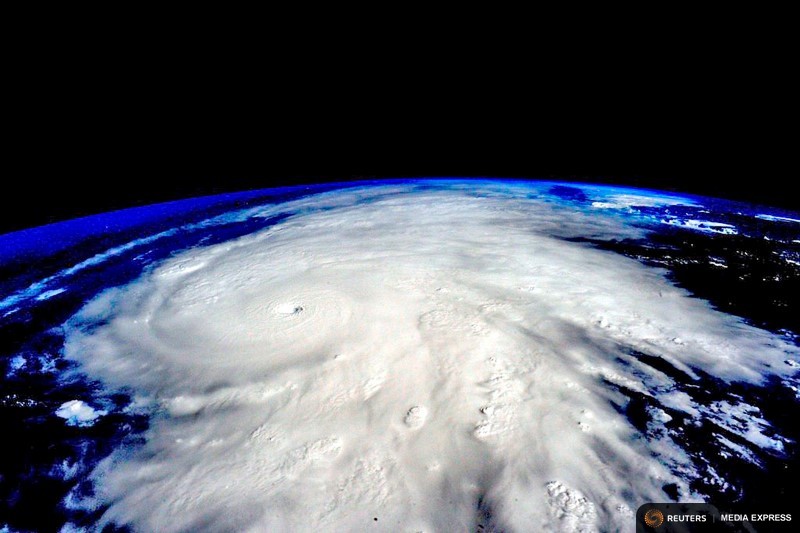 Hurricane Patricia, a Category 5 storm, is seen approaching the coast of Mexico in a NASA picture taken from the International Space Station October 23, 2015. REUTERS/NASA/Handout via Reuters

CASIMIRO CASTILLO, Mexico (Reuters) – Hurricane Patricia caused less damage than feared on Mexico’s Pacific coast on Saturday, but little was known about an isolated part of the shoreline dotted with luxury villas and fishing villages, where the storm and its 165 mph (266 kph) winds landed.

Thousands of residents and tourists had fled the advance of the storm, one of the strongest in recorded history, seeking refuge in hastily arranged shelters. There were no early reports of deaths and it appeared major damage was averted as Patricia missed tourist centres like Puerto Vallarta and the major cargo port of Manzanillo.

However, phone lines remain down where the storm hit in Cuixmala, the site of one of Mexico’s most exclusive getaways located between Manzanillo and Puerto Vallarta, and it is unclear how bad the situation could be there.

Mowing down trees, flooding streets and battering buildings, Patricia hit land as a Category 5 hurricane on Friday evening before grinding inland. It moved quickly but lost power in the mountains that rise up along the Pacific coast and was downgraded to a tropical depression on Saturday morning as it headed through central Mexico.

Experts said the storm’s speed meant it did not saturate the ground and trigger the major flooding feared. It was then broken up by high mountains, limiting the damage. 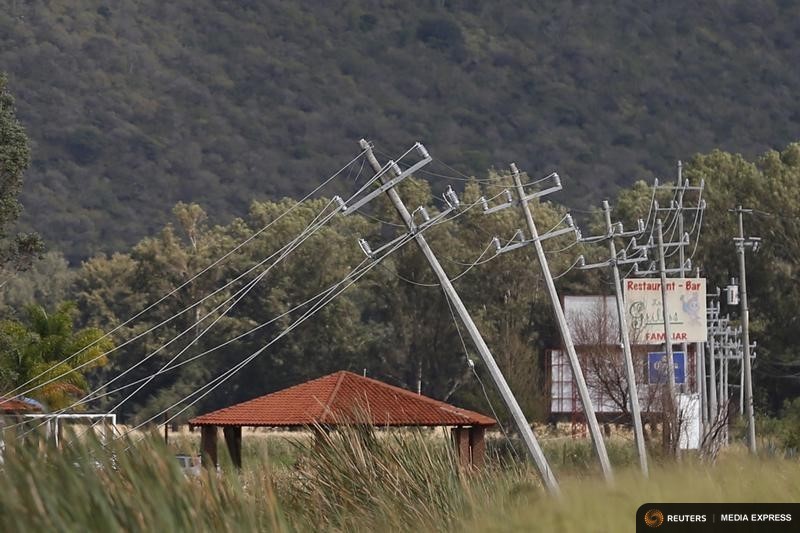 In Puerto Vallarta, where 15,000 tourists had been hastily evacuated on Friday night, hotel workers began sweeping up the debris and removing boards from windows as the sun peeked out of the clouds. The airport reopened to start ferrying tourists back home and buses crowded the streets.

Away from the more populated areas, however, residents described awaking to a scene of chaos after a terrifying night.

“We were sobbing, I thought everything was going to collapse around us,” said Jose Angel Perez, 58, who sells coconuts in the municipality of Casimiro Castillo in Jalisco state, which lay in the storm’s path. Whipping winds blew part of his roof away.

In its march north, Patricia was likely to make matters worse in Texas, which saw heavy rains overnight from a separate storm system that caused flooding powerful enough to knock over a freight train. Officials said moisture from Patricia would increase the intensity of rains swamping parts of the state by Sunday.

In Puerto Vallarta, most of the evacuated tourists had been able to return to their hotels on Friday night, officials said. 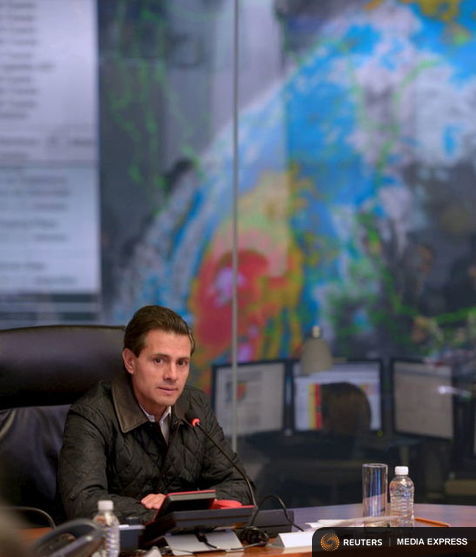 Mexico’s President Enrique Pena Nieto leads a meeting with members of the government as a satellite image of Hurricane Patricia is displayed on a screen in Mexico City October 23, 2015. REUTERS/Presidency of Mexico/Handout via Reuters

“Thankfully the damage wasn’t so bad” in the Puerto Vallarta area, said Alhy Daniel Nunes, a spokesman for the Red Cross of Jalisco state.

Patricia’s edges brushed Manzanillo port, a main transit point for Mexico’s car and mining exports. But there was no major damage and operations were set to resume on Saturday afternoon.

At one point generating sustained winds of up to 200 mph (322 kph), Patricia was the strongest hurricane ever recorded in the Western Hemisphere. Even though it lost some power before coming ashore, it was still a Category 5 storm, the strongest on the five-step Saffir-Simpson scale. Such storms are relatively rare and are capable of causing devastating destruction.

Patricia’s ferocious core was relatively small, with hurricane force winds extending 35 miles (55 km) from the centre, the Hurricane Center said. This meant Puerto Vallarta and Manzanillo were spared the worst.

The hurricane’s centre hit land on Friday evening near the area of Cuixmala, the U.S National Hurricane Center said.

Founded by Anglo-French financier Sir James Goldsmith, the resort at Cuixmala has played host over the years to a colourful assortment of world leaders, musicians and eccentric billionaires.

Maria Pavon, a Cuixmala reservations booker based in the inland city of Colima, said there were no guests staying when the storm hit as they had all been evacuated. But there was no word yet on the state of the resort. She and colleagues had been unable to make contact as phone lines were down, Pavon said.

The area around Cuixmala is sparsely populated, but there are small towns, and it was not clear yet how much damage they had suffered.

Once inland, Patricia rapidly lost power. By Saturday afternoon, it had degenerated from a tropical depression into a remnant low with maximum winds down to about 30 mph (48 kph), the Miami-based Hurricane Center said.

Patricia was located about 45 miles (72 km) southwest of the city of Monterrey, heading northeast at 22 mph (35 kph), the centre said.

It could, however, pose a flood threat, the NHC said.

Patricia became a tropical storm on Thursday and strengthened with stunning speed as it closed in on the Mexican coast. Meteorological authorities compared it to Typhoon Haiyan, which killed over 6,300 people in the Philippines in 2013.

The strongest storm on record was Cyclone Tip which hit Japan in 1979.

Welcome to Facts and Opinions. Try one story at no charge. If you value our work, please chip in at least .27 per story or $1 for a day site pass, using the “donate” button below. Click here for details about supporting us. Real journalism has value. 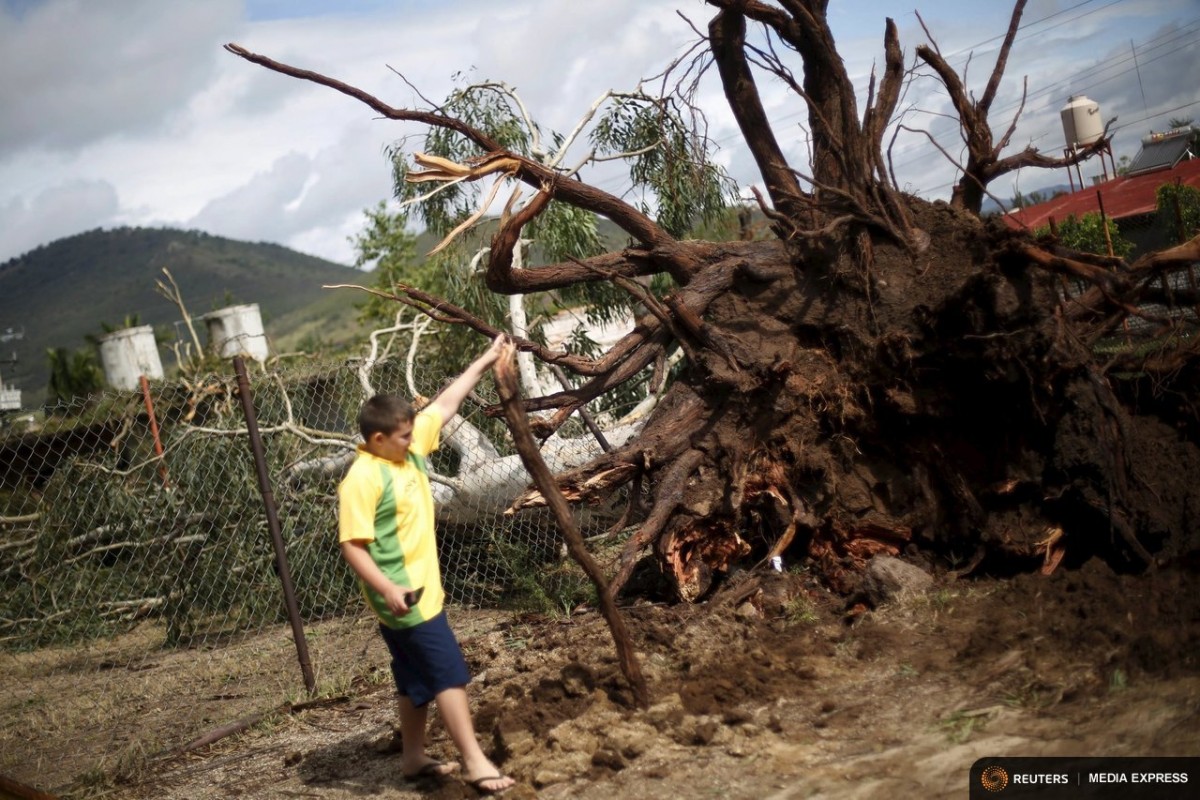 A boy looks at a tree felled by wind after the passing of Hurricane Patricia in La Union de Tula, Mexico October 24, 2015. REUTERS/Edgard Garrido

(Reuters) – Barrelling in from the Pacific, powerful Hurricane Patricia moved so quickly past the Mexican coast that it failed to saturate the ground and produce the devastating flooding that often comes with storms of this size, meteorologists said on Saturday. 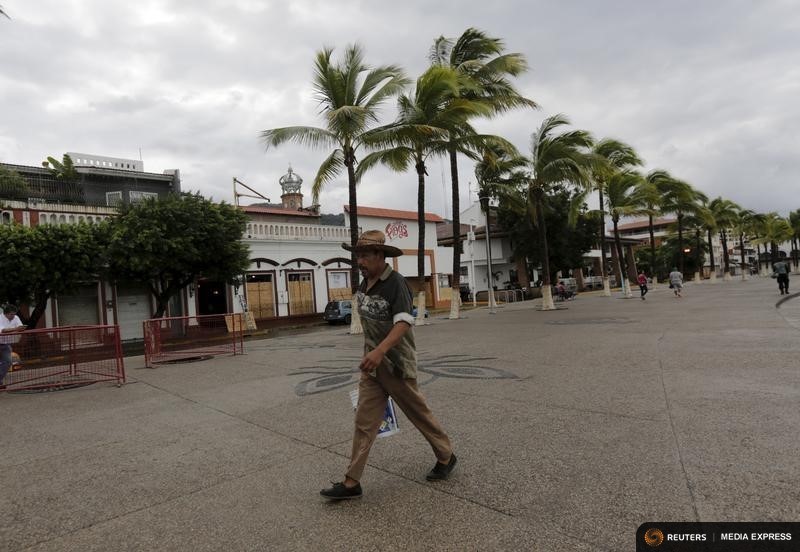 A man walks along the city’s historic boardwalk in the Pacific beach resort of Puerto Vallarta, Mexico October 24, 2015. REUTERS/Henry Romero

The Category 5 storm appeared to have caused less damage than originally feared after it made landfall on Friday south of Puerto Vallarta and north of Manzanillo as one of the most powerful storms on record with winds of about 165 miles per hour (266 km/h).

Early Friday, officials warned that Patricia could cause catastrophic damage after it drew strength in the eastern Pacific Ocean from the warm waters of this year’s El Nino climate phenomenon and reached a windspeed at sea of 200 mph, making it the strongest storm recorded in the Western Hemisphere.

While the major cities were largely spared, the extent of damage to the more remote areas was still unclear.

Patricia moved over land at a speed of about 20 mph (32 km/h), which is fast compared to other storms, meteorologists said.

“You always want a fast-moving storm as opposed to a slow-moving storm,” said Dennis Feltgen, spokesman for the National Hurricane Center in Miami.

“If this was moving slower, if it had stalled out over Mexico, we’d be looking at a catastrophic flooding event, but that’s not the case here,” he added.

In comparison to Patricia, Hurricane Manuel moved more slowly when it made landfall in western Mexico in 2013, and it was a heavily destructive and deadly storm, said Jeff Masters, director of meteorology at commercial weather forecaster Weather Underground.

Manuel killed more than 100 people in Mexico, mostly due to heavy rains which were particularly destructive in mountain areas, according to the National Hurricane Center

Western Mexico’s coastal topography also appeared to have blunted the force of the hurricane.

The ocean water off the coast where the hurricane made landfall is deep, allowing some of the water that the storm accumulated in its centre to drop and disperse before hitting land, Masters said.

If Patricia had struck a large area of shallow water just off the coast, the hurricane would have gathered a greater volume of water into a storm surge, Masters said.

Mexico’s jagged mountain ranges in close proximity to the coast were also credited with breaking the hurricane’s force by disrupting the circulation of air in the storm.