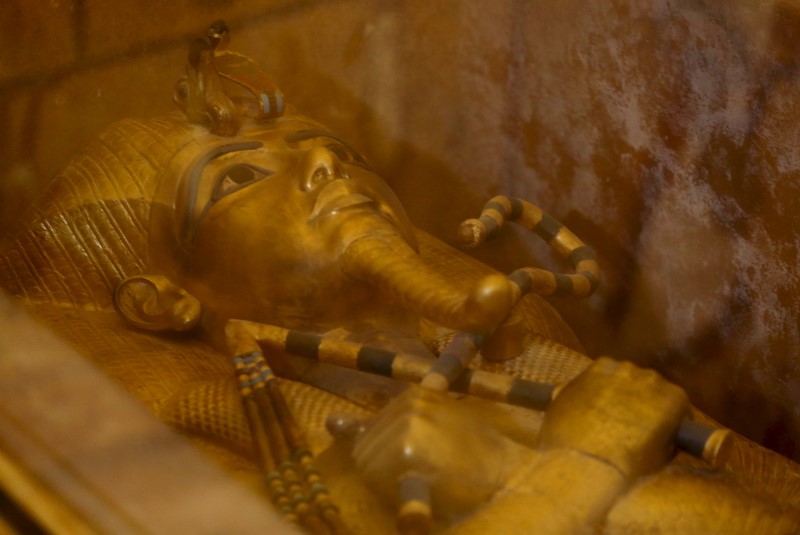 The golden sarcophagus of King Tutankhamun in his burial chamber is seen in the Valley of the Kings, in Luxor, Egypt, November 28, 2015 file photo. REUTERS/Mohamed Abd El Ghany/Files

CAIRO (Reuters) – Egypt has unearthed further evidence that a secret chamber, believed by some to be the lost burial site of Queen Nefertiti, may lie behind King Tutankhamun’s tomb, Egypt’s antiquities minister said on March 17.

There is huge international interest in Nefertiti, who died in the 14th century B.C. and is thought to be Tutankhamun’s stepmother, and confirmation of her final resting place would be the most remarkable Egyptian archaeological find this century.

An analysis of radar scans done on the site last November has revealed the presence of two empty spaces behind two walls in King Tut’s chamber, Damaty told a news conference.

“(The scans point to) different things behind the walls, different material that could be metal, could be organic,” he said.

Damaty said in November there was a 90 percent chance that “something” was behind the walls of King Tut’s chamber following an initial radar scan that had been sent to Japan for analysis.

A more advanced scan will be conducted at the end of this month with an international research team to confirm whether the empty spaces are in fact chambers. Only then, Damaty said, can he discuss the possibility of how and when a team could enter the rooms.

“We can say more than 90 percent that the chambers are there. But I never start the next step until I’m 100 percent.”

The find could be a boon for Egypt’s ailing tourism industry, which has suffered endless setbacks since an uprising that toppled autocrat Hosni Mubarak in 2011 but remains a vital source of foreign currency.

British Egyptologist Nicholas Reeves, who is leading the investigation, believes that Tutankhamun’s mausoleum was originally occupied by Nefertiti and that she lies undisturbed behind what he believes is a partition wall.

The discovery of Nefertiti, whose chiselled cheek-bones and regal beauty were immortalised in a 3,300-year old bust now on display in a Berlin museum, would shed fresh light on what remains a mysterious period of Egyptian history.

“It can be the discovery of the century. It’s very important for Egyptian history and the history of the world,” said Damaty.