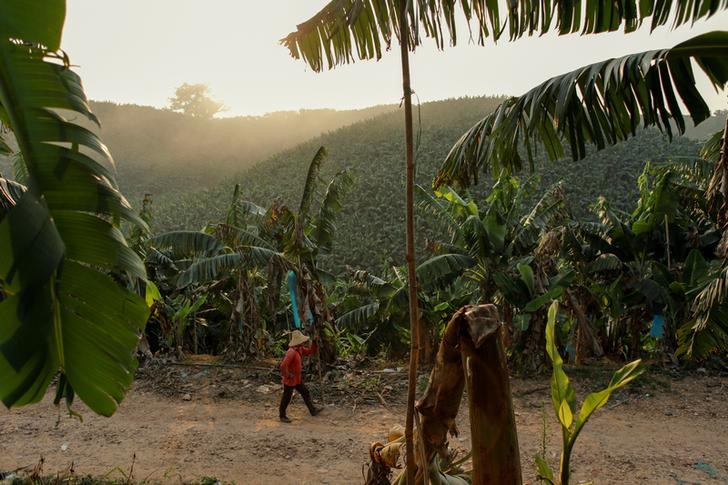 A worker walks through a banana plantation operated by a Chinese company in the province of Bokeo in Laos April 25, 2017. REUTERS/Jorge Silva

Kongkaew Vonusak smiles when he recalls the arrival of Chinese investors in his tranquil village in northern Laos in 2014. With them came easy money, he said.

The Chinese offered villagers up to $720 per hectare to rent their land, much of it fallow for years, said Kongkaew, 59, the village chief. They wanted to grow bananas on it.

In impoverished Laos, the offer was generous. “They told us the price and asked us if we were happy. We said okay.”

Three years later, the Chinese-driven banana boom has left few locals untouched, but not everyone is smiling. 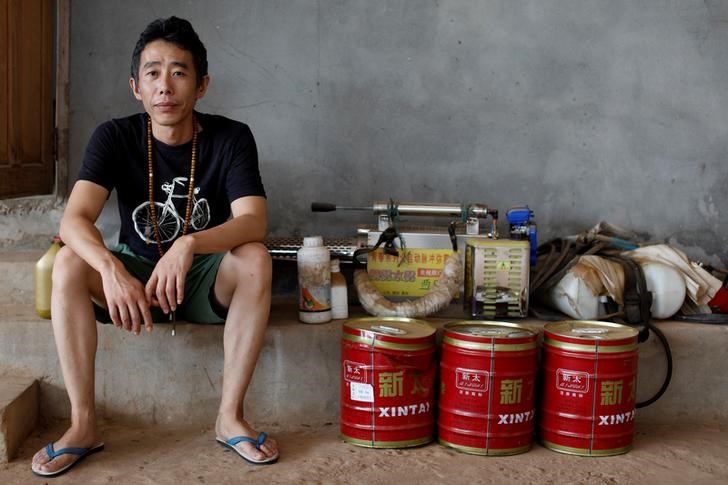 Zhang Jianjun, 40, co-owner of the Lei Lin banana plantation sits outside his house at a plantation in the province of Bokeo in Laos April 24, 2017. REUTERS/Jorge Silva

Experts say the Chinese have brought jobs and higher wages to northern Laos, but have also drenched plantations with pesticides and other chemicals.

Last year, the Lao government banned the opening of new banana plantations after a state-backed institute reported that the intensive use of chemicals had sickened workers and polluted water sources.

China has extolled the benefits of its vision of a modern-day “Silk Road” linking it to the rest of the world – it holds a major summit in Beijing on May 14-15 to promote it. 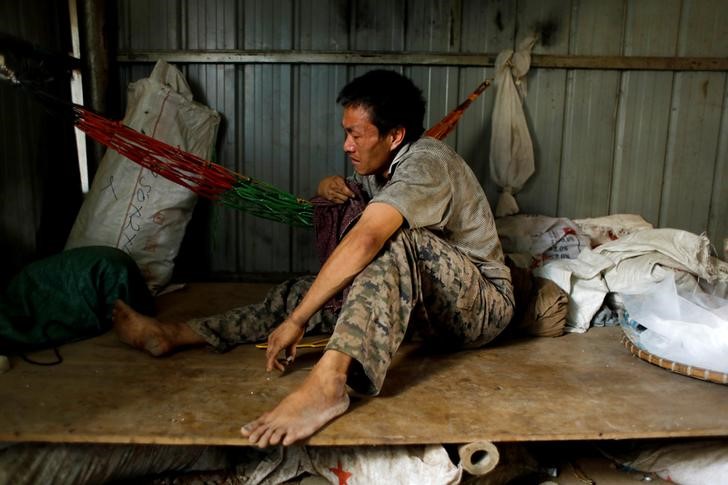 A banana plantation worker cries as he sits inside his shack during a day off at a plantation operated by a Chinese company in the province of Bokeo in Laos April 26, 2017. REUTERS/Jorge Silva

The banana boom pre-dated the concept, which was announced in 2013, although China now regards agricultural developments in Laos as among the initiative’s projects.

Under the “Belt and Road” plan, China has sought to persuade neighbours to open their markets to Chinese investors. For villagers like Kongkaew, that meant a trade-off.

“Chinese investment has given us a better quality of life. We eat better, we live better,” Kongkaew said. 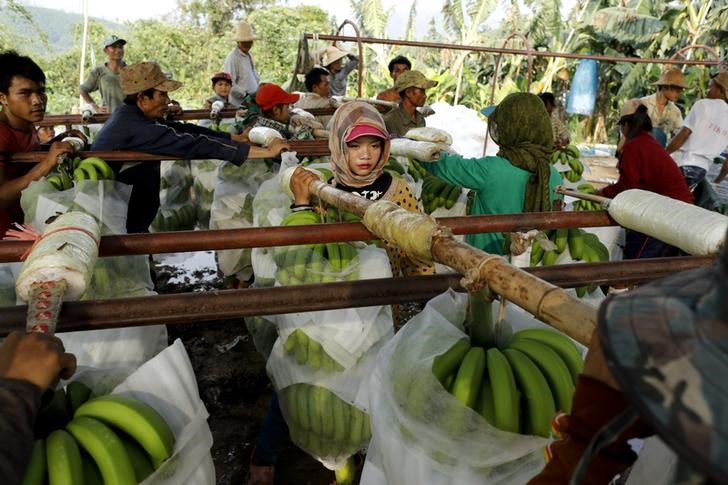 A woman waits to deliver her harvest at a packing line at a banana plantation operated by a Chinese company in the province of Bokeo in Laos April 25, 2017. REUTERS/Jorge Silva

But neither he nor his neighbours will work on the plantations, or venture near them during spraying. They have stopped fishing in the nearby river, fearing it is polluted by chemical run-off from the nearby banana plantation.

Several Chinese plantation owners and managers expressed frustration at the government ban, which forbids them from growing bananas after their leases expire.

They said the use of chemicals was necessary, and disagreed that workers were falling ill because of them. 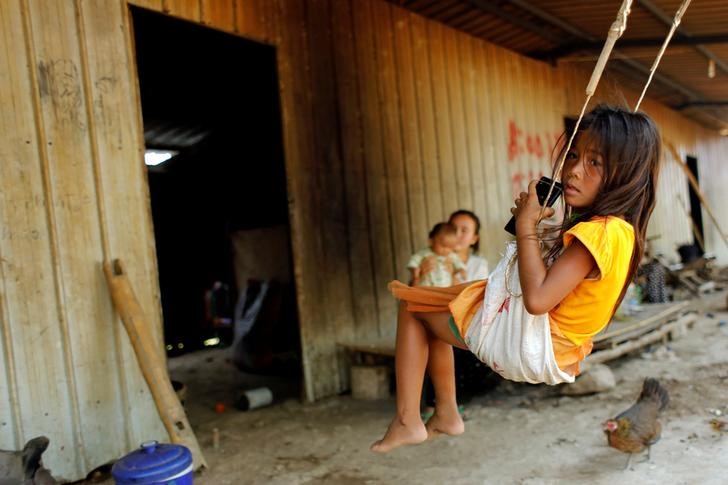 The daughter of a banana plantation worker swings outside her home at a plantation operated by a Chinese company in the province of Bokeo in Laos April 26, 2017. REUTERS/Jorge Silva

“If you want to farm, you have to use fertilizers and pesticides,” said Wu Yaqiang, a site manager at a plantation owned by Jiangong Agriculture, one of the largest Chinese banana growers in Laos.

“If we don’t come here to develop, this place would just be bare mountains,” he added, as he watched workers carrying 30-kg bunches of bananas up steep hillsides to a rudimentary packing station.

Chinese foreign ministry spokesman Geng Shuang said he was not aware of the specific issues surrounding Chinese banana growers in Laos, and did not believe they should be linked directly to the Belt and Road initiative.

“In principle we always require Chinese companies, when investing and operating abroad, to comply with local laws and regulations, fulfil their social responsibility and protect the local environment,” he told a regular briefing on Thursday. 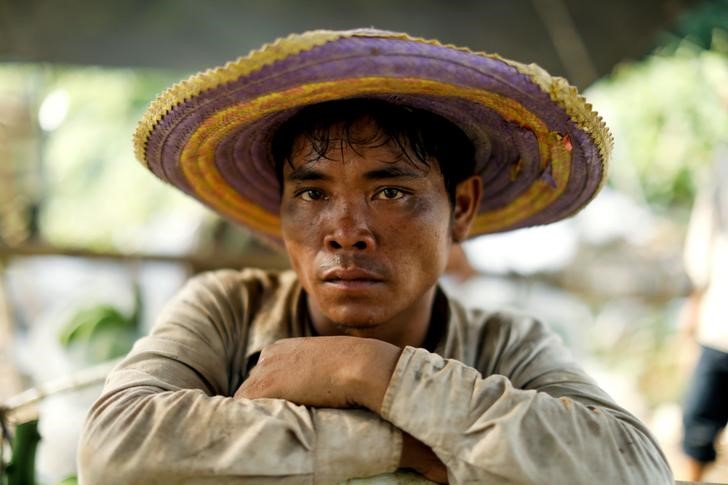 A worker waits to deliver his harvest at a packing line inside a banana plantation operated by a Chinese company in the province of Bokeo in Laos April 25, 2017. REUTERS/Jorge Silva

Laos’ Ministry of Agriculture did not immediately respond to a Reuters request for comment for this article.

China is the biggest foreign investor in Laos, a landlocked country of 6.5 million people, with over 760 projects valued at about $6.7 billion, according to Chinese state-run media.

This influence is not only keenly felt in the capital Vientiane, where Chinese build shopping complexes and run some of the city’s fanciest hotels. It also extends deep into rural areas that have remained largely unchanged for decades.

Lao people say Chinese banana investors began streaming across the border around 2010, driven by land shortages at home. Many headed to Bokeo, the country’s smallest and least populous province.

In the ensuing years, Lao banana exports jumped ten-fold to become the country’s largest export earner. Nearly all of the fruit is sent to China.

For ethnic Lao like Kongkaew, Chinese planters paid them more for the land than they could earn from farming it. 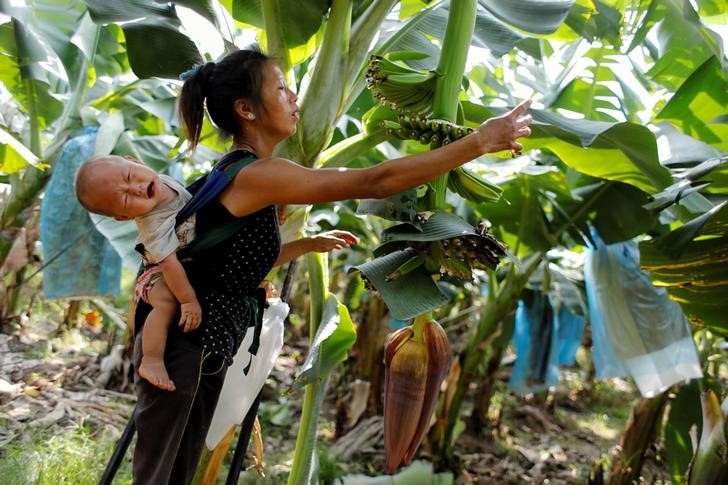 On Keo Wa, 25, carries her 9-month-old baby while working at a banana plantation operated by a Chinese company in the province of Bokeo in Laos April 24, 2017. REUTERS/Jorge Silva

For impoverished, hill-dwelling minorities such as the Hmong or Khmu, the banana rush meant better wages.

At harvest time, they can earn the equivalent of at least $10 a day and sometimes double that, a princely sum in a country where the average annual income was $1,740 in 2015, according to the World Bank.

They are also most exposed to the chemicals.

Most Chinese planters grow the Cavendish variety of banana which is favoured by consumers but susceptible to disease.

Hmong and Khmu workers douse the growing plants with pesticides and kill weeds with herbicides such as paraquat. Paraquat is banned by the European Union and other countries including Laos, and it has been phased out in China.

The bananas are also dunked in fungicides to preserve them for their journey to China.

Some banana workers grow weak and thin or develop rashes, said Phonesai Manivongxai, director of the Community Association for Mobilizing Knowledge in Development (CAMKID), a non-profit group based in northern Laos.

Part of CAMKID’s work includes educating workers about the dangers of chemical use. “All we can do is make them more aware,” she said.

This is an uphill struggle. Most pesticides come from China or Thailand and bear instructions and warnings in those countries’ languages, Reuters learned. Even if the labelling was Lao, some Hmong and Khmu are illiterate and can’t understand it.

Another problem, said Phonesai, was that workers lived in close proximity to the chemicals, which contaminated the water they wash in or drink. 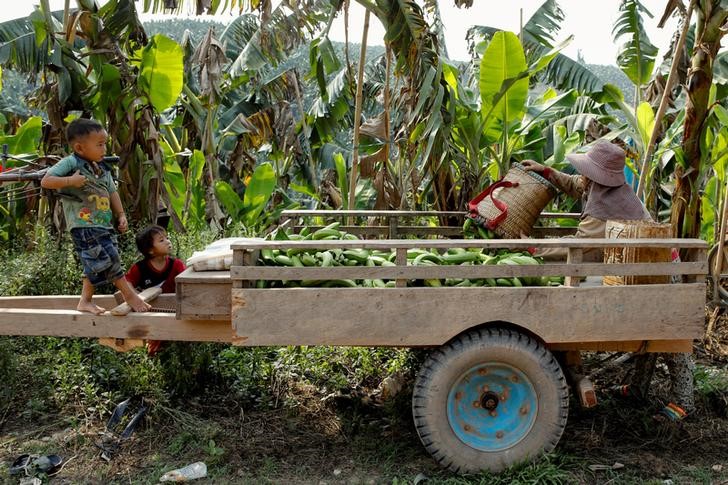 A woman puts leftover bananas in a cart next to a packing line at a banana plantation operated by a Chinese company in the province of Bokeo in Laos April 25, 2017. REUTERS/Jorge Silva

However, some workers Reuters spoke to said they accepted the trade-off. While they were concerned about chemicals, higher wages allowed them to send children to school or afford better food.

There is no guarantee the government’s crackdown on pesticide use in banana production will lead to potentially harmful chemicals being phased out altogether.

As banana prices fell following a surge in output, some Chinese investors began to plant other crops on the land, including chemically intensive ones like watermelon.

Zhang Jianjun, 46, co-owner of the Lei Lin banana plantation, estimated that as much as 20 percent of Bokeo’s banana plantations had been cleared, and said some of his competitors had decamped to Myanmar and Cambodia.

But he has no plans to leave. The environmental impact on Laos was a “road that every underdeveloped country must walk” and local people should thank the Chinese, he said.

“They don’t think, ‘Why have our lives improved?’. They think it’s something that heaven has given them, that life just naturally gets better.”