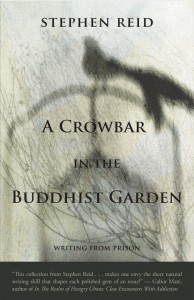 Joyce Thierry Llewellyn first encountered author and convict Stephen Reid in 1988 when, as a university student, she interviewed him for an academic project. Back then  Reid had been out on parole for just a year, having spent 20 years in jail for robbing banks and prison escapes, during which he featured on the FBI’s most-wanted list. Reid’s 1986 book, Jackrabbit Parole, had been well-received and, writes Thierry Llewellyn, “he was the poster boy for redemption.”

Flash forward. Thierry Llewellyn is today a screenwriter, story editor and instructor at the Vancouver Film School. Reid is back in jail, having lapsed, and is still writing. And once again Thierry Llewellyn is writing about Reid — this time with a review of his latest book, A Crowbar in the Buddhist Garden: Writing From Prison. This fall, it won the  City of Victoria’s most prestigious book award.

“It is not always an easy book to read,” notes Thierry Llewellyn. “Reid is a sensory writer, using vivid language to portray a variety of experiences: the horror of the nurse who looked down at his skinny, 14 year-old, addict-marked arms; the smell of urine in solitary; the screaming and howling of the angry and crazy in the next cell. In Without My Daughter, he expresses grateful awareness of his young daughter’s love, describing her as an ‘enduring victim’ whose ‘love is relentless: it jumps over the razor wire.'”