Long John Baldry was the British blue-eyed blues pioneer who taught Mick Jagger, Rod Stewart and Elton John how to sing blues-based rock ‘n’ roll. But, as s Arts columnist Brian Brennan reports in his new time capsule piece, Baldry got left behind when Jagger, Stewart and John went off to the United States to become rich and famous. An excerpt of Brennan’s Brief Encounters column, The godfather of British blues: Long John Baldry: 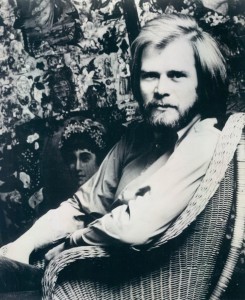 He liked to say he stood head and shoulders above his contemporaries. Because Long John Baldry stood six-foot-seven (2m) in his stocking feet, this was probably literally true for a while. But it was equally true that because his contemporaries included the likes of Mick Jagger, Rod Stewart and Elton John – who all played in Baldry’s bands when starting out – they soon surpassed him in stature.

His protégés never forgot, however, to whom they owed their success. Rod Stewart remained a lifelong friend. Elton John, who was born Reginald Dwight, took his first name from Baldry’s saxophonist, Elton Dean, and his last name from Baldry.

Baldry-influenced bands such as the Rolling Stones and the Beatles came to North America in the 1960s to capitalize on the popularity of the blues-based rock Baldry had developed, first in small clubs throughout England and later on radio and television. He had given himself the right to sing the blues, he told me, after spending hours and hours as a teenager listening to the music on a neighbour’s record player. That took him in a different musical direction from that of his friends, who were more into skiffle and trad jazz. When he starting playing guitar, his white-bread brand of blues became the basis both of Baldry’s music and that of his followers. “In those days, the only music we fell in love with was the blues,” said Stewart, “and John was the first white guy singing it. It was the true blues and everyone looked up to him.” Log in to continue reading The godfather of British blues: Long John Baldry. (subscription*)