Today marks the 70th anniversary of the liberation of Auschwitz-Birkenau, when Soviet troops freed the survivors of the Nazi death factory. More than one million people were murdered at Auschwitz, most of them Jews.

Read Auschwitz: ‛It took from three to 15 minutes to kill the people. The “Verbatim” feature is Facts and Opinions copy editor Michael Sasges’ report: extracts of the reasons for judgment prepared by members of the International Military Tribunal for Germany, which tried German leaders accused of war crimes. The document is one of the earliest summaries of the causes and consequences of the horrors perpetrated in the camp.

The commemoration of the liberation is live-streamed today from Miejsce Pamięci i Muzeum Auschwitz-Birkenau:

Soviet Soldier Describes What It Was Like To Liberate Auschwitz, by THIBAULT MARCHAND, AFP (On Business Insider)

It was the silence, the smell of ashes and the boundless surrounding expanse that struck Soviet soldier Ivan Martynushkin when his unit arrived in January 1945 to liberate the Nazi death camp at Auschwitz.

As they entered the camp for the first time, the full horror of the Nazis’ crimes there were yet to emerge. 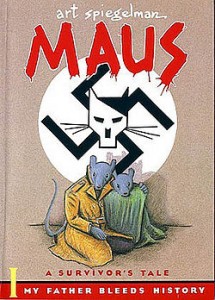 “Only the highest-ranking officers of the General Staff had perhaps heard of the camp,” recalled Martynushkin of his arrival to the site where at least 1.1 million people were killed between 1940 and 1945 — nearly 90 percent of them Jews. “We knew nothing.”

But Martynushkin and his comrades soon learned.  continue reading  (you will leave Facts and Opinions)

…. And as societies across Europe grapple with immigration, and seek to define themselves and their values anew, asking their religious minorities to prove their loyalty to their country, the words embossed on the monument at Birkenau, “let this place be a cry of despair and a warning to humanity” have a chilling resonance once again. … continue reading (you will leave Facts and Opinions)

Maus, first serialized in the Raw anthology, was published by Pantheon Books in 1991. It won a 1992 Pulitzer Prize, the first graphic novel to win a Pulitzer. In the novel, Spiegelman interviews his father about his experiences as a survivor of Nazi concentration camps.

Interview with an Auschwitz Guard: ‘I Do Not Feel Like a Criminal,’ der Spiegel. Interview Conducted by Felix Bohr, Cordula Meyer and Klaus Wiegrefe

Jakob W. was 19-years-old and in his third semester studying architecture at college when he received the letter that would, seven decades later, turn him into a suspect for complicity in murder.

In the summer of 1942, the young man from a village near Belgrade received his draft notice. Just a few months later, he was standing on a tower hundreds of kilometers away from his home in Yugoslavia. Jakob W. was now an SS guard in the Auschwitz-Birkenau concentration camp — and thus a party in the most horrific of the crimes committed by the Third Reich. For two and a half years, he looked down at the factory of human annihilation, day in and day out. … continue reading (you will leave Facts and Opinions).