At age 60, Irish writer Brian Moore decided to switch from novels to plays. However, as Arts columnist Brian Brennan reports, it was an experiment not destined to be repeated. An excerpt of Brennan’s Brief Encounters column, A Prolific Novelist on Diverse Themes: Brian Moore (subscription needed):

After 25 years of writing novels, Brian Moore was trying his hand at playwriting when I met him in Edmonton in 1981. He had adapted his novella Catholics for television in 1973 and now was preparing it for its Canadian stage debut at the Citadel Theatre. He was enjoying the experience of working with a theatre group, not least because it got him out of the house “As one goes on writing novels, one spends more and more time alone,” he said wistfully. 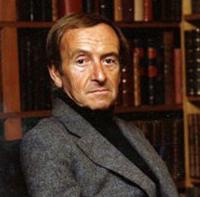 Moore had been living in North America for more than 30 of his 60 years, first in Montreal and more recently in Malibu, in California. You could still hear the unmistakeable sound of his native Belfast in his speech. While he often had to correct people’s pronunciation of his first name, Moore still pronounced it the way his Gaelic-speaking mother had sounded it out when he was a child: “Bree-ann.”
Moore told me that being around actors and other theatre people gave him a welcome opportunity to recapture the kind of camaraderie he had enjoyed as a young reporter in Montreal when he moved to Canada in 1948. After sharpening his skills by writing pseudonymous thrillers, Moore settled into the life of a full-time novelist following the publication of what he considered his first serious literary work, Judith Hearne, in 1955. From that point on, Moore missed “the normal sort of working relationship that other people have” because novel writing kept him “divorced from ordinary day-to-day life.”
But he didn’t want people to see Catholics – set in a remote island monastery off the coast of Ireland – as a metaphor for the isolated life of the writer. … log in* to read  Prolific Novelist on Diverse Themes: Brian Moore.