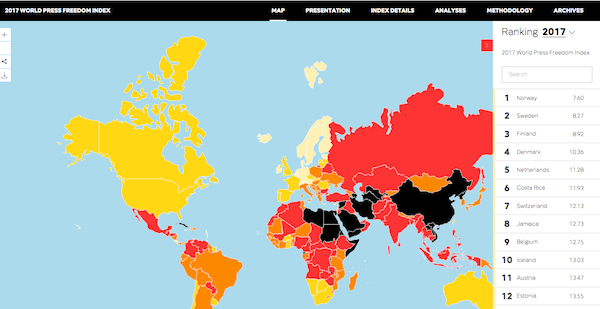 “Once taken for granted, media freedom is proving to be increasingly fragile in democracies,” said an RSF analysis. Authoritarian regimes and dictatorships are not the only culprits for abuse, it said. “In sickening statements, draconian laws, conflicts of interest, and even the use of physical violence, democratic governments are trampling on a freedom that should, in principle, be one of their leading performance indicators. “

Even the leading European democracies  have declined, notably Finland and the Netherlands, said RSF.

“By eroding this fundamental freedom on the grounds of protecting their citizens, the democracies are in danger of losing their souls,” said RSF Secretary-General Christophe Deloire.

Media freedom has retreated wherever the authoritarian strongman model has triumphed. Democracies began falling in the Index in preceding years and now, more than ever, nothing seems to be checking that fall.

RSF’s “global indicator” has never been so high (3872). This measure of the overall level of media freedom constraints and violations worldwide has risen 14% in the span of five years.

As we have reached the age of post-truth, propaganda, and suppression of freedoms, this 2017 World Press Freedom Index highlights the danger of a tipping point in the state of media freedom, especially in leading democratic countries.

European countries  — which also rank high on assessments of citizen happiness and economic competitiveness — ranked at the top of 180 countries, led by  Norway, Sweden, Finland, Denmark, and the Netherlands.

Canada dropped four spots in one year to 22. France and the United Kingdom ranked 39 and 40 respectively, with the United States at 43. Mexico is far less free, at 143; Russia at 148, and China at 176. Dead last is North Korea. The biggest change is in Italy, which jumped 25 spots year over year to 52nd place.

RSF bases its results on a questionnaire about pluralism, media independence, media environment and self-censorship, legislative framework, transparency, and the quality of the infrastructure that supports the production of news and information. It explains its methodology here.

Compare press freedoms where you live to other countries using RSF’s table, here. 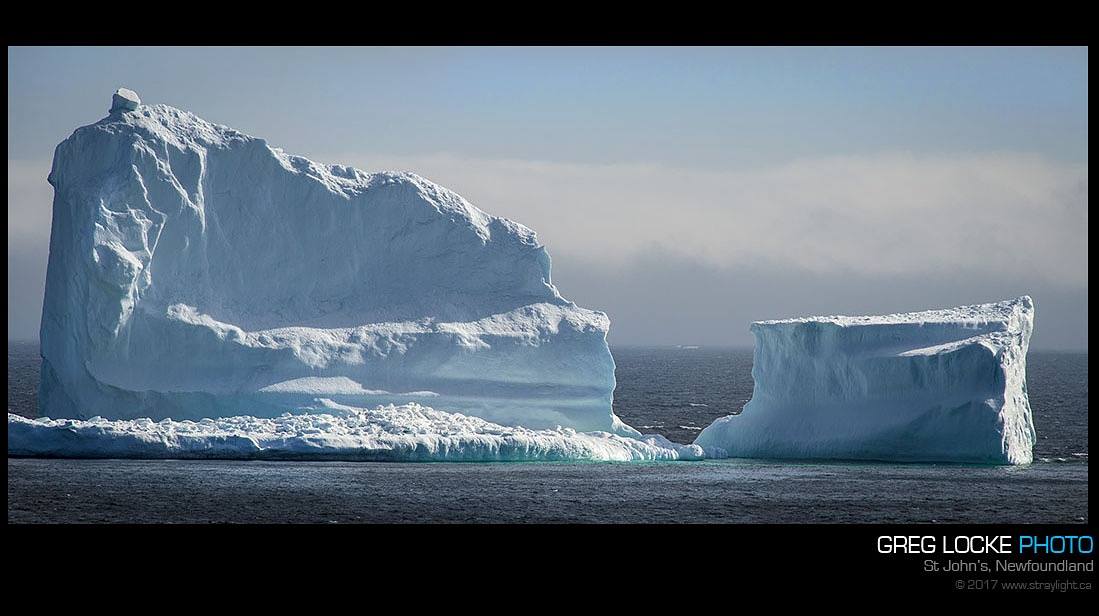 Ferryland, 50 kilometers south of St Johns, is the backdrop to Newfoundland’s first icebergs of spring. Heavy Arctic ice pack and icebergs cause havoc with shipping and fishing operations, but tourists flock to the Canadian province to see them. Photo © Greg Locke 2017 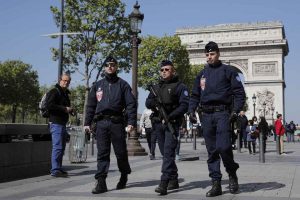 French CRS police patrol the Champs Elysees Avenue the day after a policeman was killed and two others were wounded in a shooting incident in Paris, France, April 21, 2017. REUTERS/Benoit Tessier

French voters go to the polls on April 23 for the first round of what has been the most unorthodox, unpredictable and potentially momentous presidential contest in recent French history. It could have repercussions far beyond the continent.

The killing of a policeman by a suspected Islamist militant pushed national security to the top of the French political agenda on Friday, two days before the presidential election.

A daughter’s freedom vs her sibling’s lives, by  Zohra Bensemra  Feature/Photo-essay 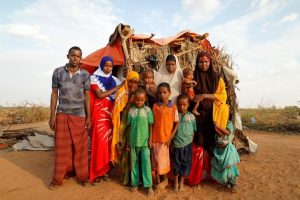 Zeinab, 14, (2nd L) poses for photograph with her family beside their shelter at a camp for internally displaced people from drought hit areas in Dollow, Somalia April 3, 2017. REUTERS/Zohra Bensemra

As the village wells dried up and her livestock died in the scorched scrubland of southern Somalia, Abdir Hussein had one last chance to save her family from starvation: the beauty of her 14-year-old daughter, Zeinab.

Trump ain’t seen nothing yet, Iran to top agenda, by Jonathan Manthorpe

Trump is going to have to up his global game if he wants to be regarded as anything more than a gormless and dangerously unpredictable Vaudeville act. His opportunity looms as Iran, its nuclear development program and its involvement in Middle East conflicts, bubble to the top of the agenda.

When is free speech not “free” on campus?  by Tom Regan  Column

Of all the things that I value the most about living in a democracy, freedom of speech is probably the most important. And so when I read about actions by students lately to limit the rights of conservative or far right speakers on several American campuses, my first reaction is one of rage. How dare they? But it’s not that simple. 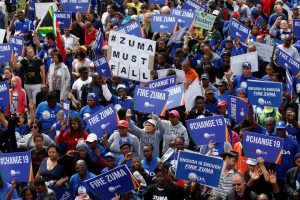 It is fitting symbolism that one of the most intense of the many mass demonstrations in recent days, demanding the removal of South African President Jacob Zuma, was in the square in front of Cape Town’s City Hall. It was in this same square on the evening of February 11, 1990, that tens of thousands of South Africans thronged to hear the first public speech by Nelson Mandela after his release from Victor Verster Prison earlier that day.

Legalized weed in Canada an idea whose time has come, by Tom Regan   Column

Canada, based on a campaign promise made by the Trudeau government, introduced legislation to make recreational marijuana use legal in Canada by July 2018. It’s about time. I’m glad to see that Canada has chosen to take the lead on this issue.

Trump and Yellen may not be such an Odd Couple, by By Howard Schneider and Ann Saphir   Analysis 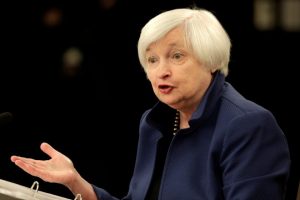 At first glance, U.S. President Donald Trump and Federal Reserve chair Janet Yellen may have little in common. Yellen is an academic economist and veteran of Democratic administrations who is committed to an open global economy, while Trump is a real estate mogul with an electoral base suspicious of the economic order Yellen helped to create. Yet the two may have interests in common now that Trump is president and both want to get as many Americans working as possible.

Findings from the world wide web:

The European Space Agency this month issued a stark warning about a pollution source few consider, awash as we are in an ocean of plastic, an atmosphere of greenhouse gases, and degraded soil. Space, warns the ESA, is littered with thousands of objects smashing into each other — including into vessels humans may want to send up for exploration or, in the wild hopes of some thinkers, escape from an unlivable earth. Find the ESA statement here, or read a Washington Post story for a bit more context.

The New Yorker reports on the death this month of guitarist Bruce Langhorne, age 78, from complications related to an earlier stroke.  “For anyone who, in the mid-nineteen-sixties, frequented the smoky, caliginous folk clubs of Greenwich Village, the muscular, smiling Langhorne and his acoustic guitar were a recurring vision: he played with Buffy Sainte-Marie, Richard and Mimi Fariña, Peter La Farge, Joan Baez, Richie Havens, Harry Belafonte, and a bevy of other revivalists.” Most of the world, though, is most familiar with him as Bob Dylan’s sideman, and the hero of  “Mr. Tambourine Man.”

From Vimy to Gibraltar, Obamacare to Russia: Journalism Matters at F&O 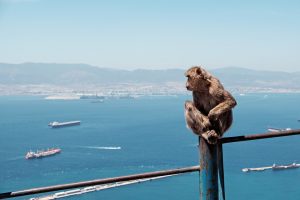 New on F&O this weekend:  Sunday April 9 marked the 100th anniversary of the WWI battle of Vimy Ridge — said to have marked Canada’s passage from colony to country status. Read our report with photo-essay by Reuters, France, Canada leaders mark centenary of Vimy Ridge WWI battle. In Commentary Tom Regan notes that for Canada and the United States, the battle and World War I have very different meanings.  Read Regan’s column,“War to End All Wars” fading from history, here.

Jonathan Manthorpe this week considers Gibraltar — “The Rock” Caught In A Hard Place — in a new column about the territory in British hands since 1713, and is now emerging as an issue in negotiations with Brussels to leave the European Union. Read more about Gibraltar.  Manthorpe’s previous column, Beijing brings order to its colonial “Savage Reservations,” contends that Beijing is reaching back into the excesses of Maoist Stalinism and forward into the high-tech social control of Aldus Huxley’s “Brave New World” to try to contain the restive natives of its colonial outposts, Tibet and Xinjiang, setting the stage for grief for Hong Kong. Click here for the column on China, or here for the list of all of Manthorpe’s F&O works.

Americans turn Canadian about health care, writes Penney Kome in a new piece about how U.S.  public opinion is forcing Republicans to think “expansion,” not “repeal,” of the Affordable Care Act. Read the column, or find Kome’s complete  F&O OVER EASY columns here.

Jim McNiven has been pondering the fuss made by America over Russia, and asks this week, Why Does America’s President Bother with Russia? That column is here, or find all of McNiven’s THOUGHTLINES columns for F&O here.

Noteworthy items elsewhere on the web:

“Why do so many in the news media love a show of force?” asks Margaret Sullivan in the Washington Post.
Good question. The answer is probably found in audience ratings and social media shares– and so, as with everything in the world of commerce, with citizen’s demands.

Last but not least, here are some of our other recent stories, in case you missed them:

Trump and Russia: “There is a smell of treason in the air”/TOM REGAN    Column

Note: this post was updated April 9 to include our report on the Vimy Ridge event in France.